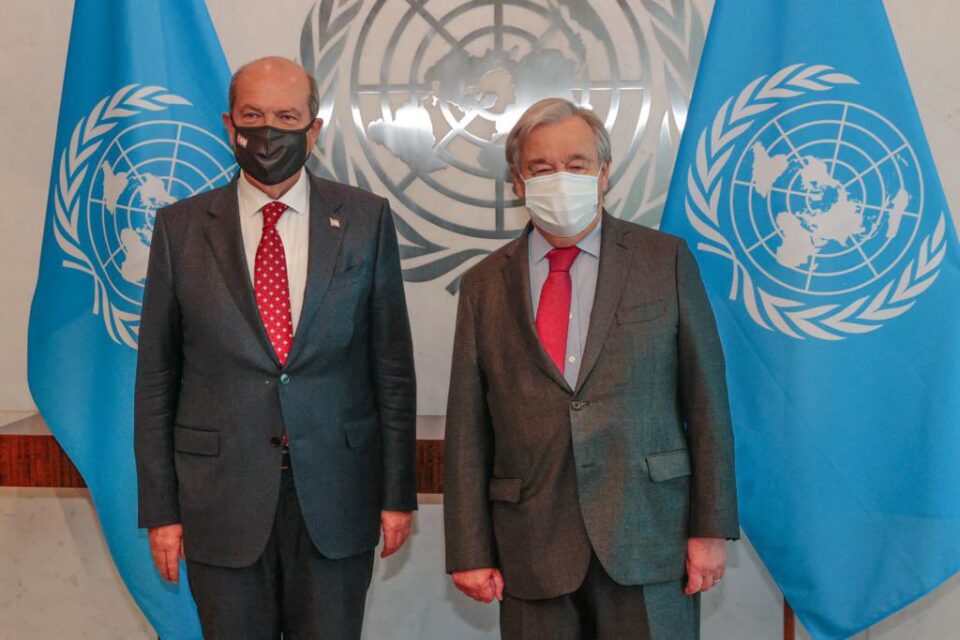 A new formal process on the Cyprus issue can only take place on the basis of equal sovereignty, Turkish Cypriot leader Ersin Tatar told UN Secretary-General Antonio Guterres during their meeting in New York on Saturday.

An announcement from the ‘presidency’ said the meeting was “positive and constructive”.

Tatar had underlined that it was the right of Turkish Cypriots to have their “equal and sovereign state” recognised by the international community, as Turkish President, Tayyip Erdogan, requested from the floor of the General Assembly, and added that in order to realise this right of theirs, the ‘TRNC’ would “resolutely continue the actions with the motherland Turkey”.

He also asked Guterres for the immediate lifting of the “inhumane embargoes”, as noted, and for the UN Secretary-General to take initiatives in this direction, making special reference to the fact that Turkish athletes cannot take part in competitions in abroad.

Tatar also raised the lifting of the US arms embargo on Cyprus and said: “The matter will not remain like this.

Corresponding steps will be taken in cooperation with the motherland Turkey”.

He also asked that the UN sign an agreement with the Turkish Cypriot side on the status on the peacekeeping force Unficyp, which was initially asked to come to the island in 1964 by the Cyprus government, with whom it has the agreement.

Tatar said Guterres told him that he was well aware of the Turkish side’s position on the resumption of formal negotiations and reiterated that he would be sending a personal envoy to see if there was enough common ground for new negotiations.

The Turkish Cypriot leader said there was hardly any common ground for negotiations and that the Cyprus issue should now go to the UN Security Council if the UN too finds no common ground. He said he told this to Guterres.

In separate statements to Turkish-speaking journalists after the meeting in New York, Tatar said he told Guterres there could no longer be a federal solution and the UN must move on to negotiations for a two-state solution.

There should be cooperation between the two sides on issues such as hydrocarbons, solar energy, sharing of water resources, demining and preventing irregular migration.

He also argued that the UN should take a step to recognise the ‘TRNC’ as it did with ‘southern Cyprus’, as he called the Republic.

“The international community, he continued, must no longer deceive itself. You talk about human rights, international agreements and UN declarations, but you remain spectators to the isolation and embargoes that are still persistently applied to the Turkish Cypriot people,” he said.

“Put an end to this torture now, lift the isolation and embargoes and accept the reality of the TRNC because now in Cyprus there is no turning back from this. There are institutions and bodies of two separate states for 60 years”.

Neither should Turkey’s guarantee or its troops be abandoned. “They aim to drag us into a federal structure with a supposedly permanent arrangement to sever our ties with the motherland and make us a minority at risk of assimilation,” he said.