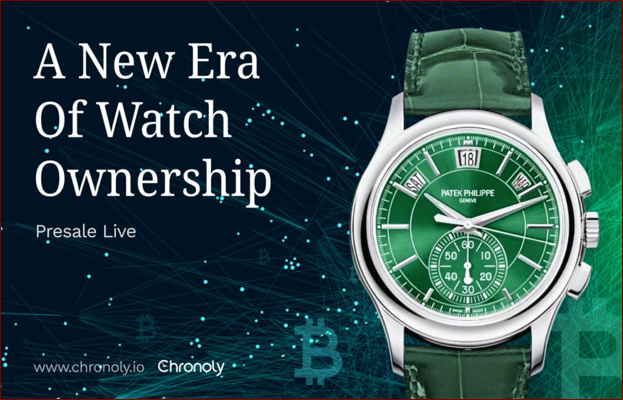 The value of several cryptocurrencies have plummeted in the last one year. Their downfall became steeper during the crypto market upheaval this year. Digital assets like Elrond (EGLD) and 1Inch Network (1INCH) have left their investors disappointed by falling to record lows. Interestingly, CRNO, the utility token of watch marketplace Chronoly.io, has shown massive growth in a very short time. Chronoly recently completes the CRNO presale in less than 24hrs, and to the delight of investors, the price of CRNO tokens jumped 690% during the presale. Here’s a look at the performance of Elrond (EGLD), 1Inch Network (1INCH) and Chronoly (CRNO).

In a bearish market where most cryptocurrencies like Elrond (EGLD) and 1Inch Network (1INCH) have left investors poorer, CRNO has emerged as one of the fastest growing crypto assets in 2022. During the recently completed sold out presale, the price of CRNO tokens jumped 690% from $0.01 to $0.079 within a few months. Investors and analysts are now seeing Chronoly’s CRNO tokens as a must-have asset to tackle the chills of ongoing crypto winter, which is expected to last longer.

As a revolutionary watch marketplace, Chronoly packs some unrivaled features that are resonating well with investors. Chronoly is changing the way people buy, sell or invest in rare luxury watches. It offers fractional NFTs backed by real watches for as little as $10.

Chronoly NFT owners enjoy real ownership of luxury watches, and they can trade their holdings in the open market. Soon, users will also be able to showcase their ownership of luxury watches in the metaverse. These features have boosted the outlook for CRNO tokens. Analysts believe CRNO price will multiply faster after its formal launch on a crypto exchange. In anticipation of a huge price jump, investors are rushing to buy Chronoly’s CRNO tokens.

Elrond is a layer one blockchain protocol trying to compete with Ethereum. While the Elrond protocol has managed to become one of the leading smart contract platforms for dApp developers, the performance of EGLD, the native token of this network, has disappointed investors. EGLD token touched its all-time high (ATH) of $542.58 on November 23, 2021. However, it has been on a downhill journey since then, falling over 91%, according to data from CoinMarketCap.

Elrond is currently trading at around $48. During the crypto market crash in June 2022, Elrond network’s EGLD token fell to $41.63 and it has not been able to register any significant gain since then. Unless there is a bullish movement in the crypto markets, the price of EGLD token is expected to remain subdued.

The performance of 1Inch Network’s governance token 1INCH has been similar to Elrond (EGLD) in the last one year. 1Inch (1INCH) cryptocurrency reached its all-time high of $7.87 on May 8, 2021. Currently trading at around $0.61, 1INCH token has fallen over 92% from the ATH.

The 1Inch Network’s token price dipped to an all-time low of $0.5178 during the recent market crash in June 2022. However, it has moved over 18% up from the all-time low.

The falling price of 1Inch Network’s cryptocurrency, 1INCH, is in tune with the overall downfall of all major crypto assets. However, investors may get some respite from the fact that the network is well-funded with investments from firms like Binance Labs, Pantera Capital, Amber group, FTC, Next, Celsius, Gemini Frontier Fund etc. It is also very popular among traders.

The 1Inch Network works as a decentralized aggregator that searches deals across multiple liquidity sources, providing better rates to traders than any individual exchange.