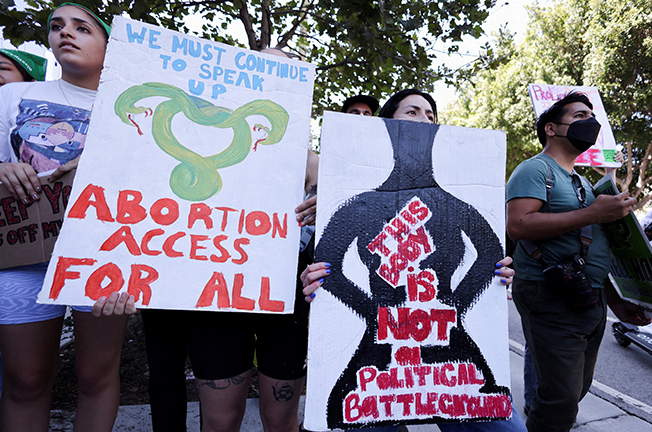 In November's midterm elections, legislative races across half a dozen states - including Maine, North Carolina and Wisconsin - could determine whether millions of Americans see abortion access expanded or restricted

Maine state Representative Reagan LaRochelle didn’t spend much time discussing abortion with voters when she ran for office last year. But she said the conversation has changed after the U.S. Supreme Court eliminated a nationwide right to abortion.

In November’s midterm elections, legislative races across half a dozen states – including Maine, North Carolina and Wisconsin – could determine whether millions of Americans see abortion access expanded or restricted.

“People have never had to worry about what their local state legislator thinks about abortion before,” LaRochelle said on her way to knock on doors for her re-election campaign. “For a lot of people, it’s worrisome. It’s scary.”

The court’s ruling in June has drawn increased focus on the down-ballot races, which typically receive little national attention. Republicans have held a majority of statehouse seats across the nation since 2012.

Both the Republican State Legislative Committee (RSLC) and the Democratic Legislative Campaign Committee (DLCC), which support legislative candidates, reported a record pace of fundraising in the first half of the year. A Democratic-aligned group, the States Project, said it would spend a massive $60 million on state legislative races this cycle.

Polls have consistently found the economy remains voters’ top concern, but abortion has risen since June. A Reuters/Ipsos poll last week found 15% of Democrats consider the end of national abortion rights the biggest problem facing the country, compared with 20% who cited the economy as their chief worry.
Democrats point to a series of special elections in which they outperformed expectations as evidence that abortion has shifted the political playing field, including a New York congressional race last month.
“The Dobbs decision has been a game-changer for Democratic state legislative candidates across the country,” said Jessica Post, president of the DLCC, referring to the Supreme Court case. “The fight for abortion rights is going to be resolved in state legislatures.”

Republicans say economic worries, particularly inflation, will ultimately drive the outcome of November’s elections.
“It’s no surprise that state Democrats would rather talk about anything other than how their failed policies have exacerbated the number one concern for voters in every battleground state – the rising cost of living,” said Andrew Romeo, a spokesperson for the RSLC.

Democratic candidates have sought to ensure voters understand the connection between legislative races and abortion access after decades of federal protection.
In Minnesota, where Republicans control the state Senate and Democrats the House of Representatives, both chambers are seen as potentially competitive.

While abortion has remained legal there under a state Supreme Court decision, Democrats warn that Republicans could eventually alter the landscape, either by putting a constitutional amendment in front of voters or by elevating more conservative justices.

Minnesota Representative Kelly Morrison, an obstetrician/gynecologist running for a competitive state Senate seat, cited Iowa as an example. The state Supreme Court this year ruled the state constitution does not protect abortion rights, reversing its own ruling from four years earlier after several new appointees joined the court.

“Minnesotans are pretty informed voters,” Morrison said. “They know all the states around us have either banned (abortion) or severely restricted it.”
Her Republican opponent, Kathleen Fowkes, said Democrats are “gaslighting” voters by suggesting that abortion could be imperiled as a way of distracting from more important issues, such as rising crime and burdensome taxes.
“Whether Kelly is elected or I’m elected, abortion is not going to change in Minnesota,” Fowkes said.

In both North Carolina and Wisconsin, Republicans are a few seats away from legislative super-majorities that could override vetoes from Democratic governors. While abortion in North Carolina remains legal up to 20 weeks of pregnancy, Wisconsin abortions have stopped under a 19th-century ban.

Democratic North Carolina Governor Roy Cooper recently headlined an advertisement for a state Senate candidate, telling voters of a proposed abortion ban, “I’ll veto it – but I need enough senators to uphold it.”

In Arizona, where a state judge ruled on Friday that a 1901 abortion ban can be enforced, Democrats have vowed to protect abortion rights if they win the governorship and erase Republicans’ narrow majority in the legislature.

In Maine, where abortion remains legal, Republicans have a chance to win both chambers and the governorship, potentially paving the way for fresh abortion limits.
Stacy Brenner, a state senator running for re-election, has spoken publicly about her experiences with abortion. As a nurse midwife before becoming a farmer, she provided abortion care, and she had two abortions of her own as a young woman when her birth control failed.

She reeled off a list of steps the Democratic majority has taken to expand abortion rights. “We’re one election away from that not being the case,” she said.