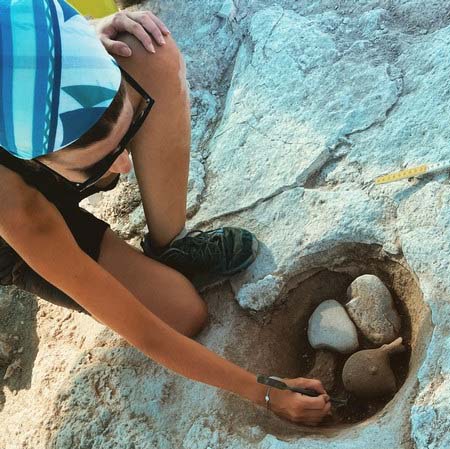 A team of archaeologists have uncovered what appears to be the remnants of a Bronze Age workshop complex in the village of Erimi in Limassol.

The team of experts, led by the University of Siena and directed by Prof. Luca Bombardieri, have now completed the 2022 fieldwork season by the Italian Erimi Archaeological Project at Laonin tou Porakou, where they investigated an extended area of the Bronze Age settlement located on the highest plateau on the eastern Kouris riverbank, the island’s antiquities department said on Friday.

“The research on field focused on four important areas of the Middle Bronze Age settlement, with a major aim to clear aspects of social development of this prehistoric community,” the antiquities department said in a press release.

The investigation of the workshop complex on the top of the hill confirmed that the newly-discovered workshop, mainly intended for the production of dyed textiles, had a pivotal role for the Erimi community.

An extension of the area investigated turned up a series of different rooms and buildings equipped with large square basins, suggesting further workspaces as well as a separate residential complex. Moreover, there was evidence to suggest numerous rooms had been filled-in and remodelled at various times to better-serve the purpose of its users.

“The bench was used as a milling table with a multiple installation for three grinding slabs. An additional collection of discarded rubbers has been also found from the same room, which was likely used as a space for grinding on a large scale.”

According to the press release, the location and spatial distribution of the newly excavated units in the southernmost extension of the productive atelier is a strong confirmation of the coherent design of the complex, which now appears characterised by a central working open courtyard enclosed by three series of parallel building rooms to the North, West and South.

The excavation in the residential quarter revealed a long-term use and transformation of the settlement layout. Investigations also found evidence of long drainage channels and a kitchen area, to feed the artisans who lived and worked at the complex.

“An additional semi-circular bench with a rubber installation was built to the West of the unit, along with numerous large ceramic containers emplaced into the floor, while a large refuse pit is located to the South-East corner of the unit. The presence of numerous discarded animal bones from the pit, along with the presence of a fireplace nearby, where a few tripod cooking pots were found out, suggests that this space was also used for the processing and preparation of food.”

Interestingly, a complete terracotta mould for axe-shaped ingots was found, which may give us an idea of what else may have been produced at these workshops.

Meanwhile, due to an ongoing collaboration with the Politecnico di Torino and the University of Warsaw, a GPR survey was also conducted on the wider extension of the lower terrace, in order to collect new data to plan for future investigation in the residential quarter. A series of fixed physical topographical points and an aerial photo acquisition by drones has been conducted with the aim of mapping and creating a general 3D model of Bronze Age settlement.

The fieldwork season involved a team of archaeologists of the University of Siena, MA and PhD students from Italy, Cyprus and Greece, with a joint support of a topographer, an archaeobotanist of the Cyprus Institute and a team of four restorers from the Conservation School Palazzo Spinelli in Florence.