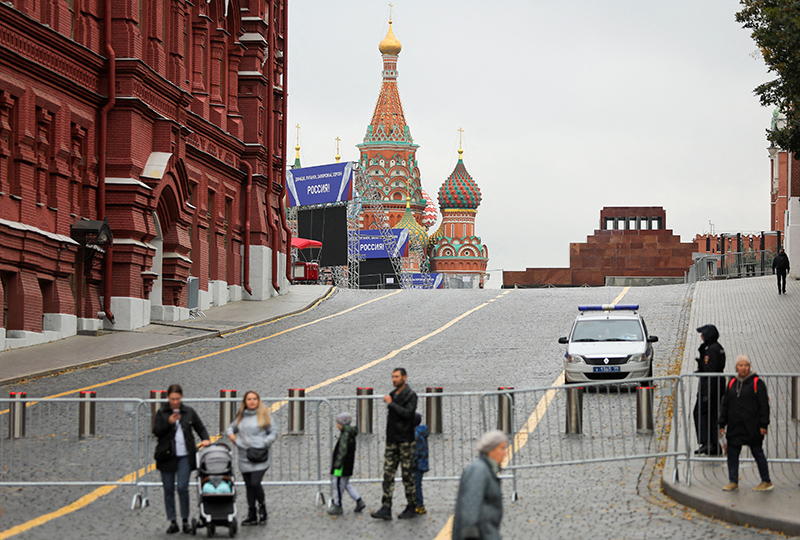 A missile attack on a convoy of cars in southern Ukraine killed a number of civilians on Friday, hours before President Vladimir Putin was due to proclaim Moscow’s rule over lands it has seized in his invasion.

The convoy was assembling in a car park near Zaporizhzhia city to carry people and supplies into Russian-held territory in Ukraine’s southern Zaporizhzhia province. The regional capital is still controlled by Ukraine.

A missile had gouged a crater in the ground near two lines of vehicles. The impact had thrown chunks of dirt ino the air and sprayed the vehicles with shrapnel. The windows of the vehicles – mostly cars and three vans, were blown out. Reuters saw around a dozen bodies, four of them in cars.

The vehicles were packed with the occupants’ belongings, blankets and suitcases. A body leaned from the driver’s seat into the passenger seat of a yellow car, his left hand still clutching the steering wheel.

The attack took place hours before President Vladimir Putin was due to stage a ceremony in an ornate Kremlin hall to proclaim Russia’s rule over around 15% of Ukraine, the biggest annexation in Europe since Hitler. It would be followed by a celebratory pop concert outside the Kremlin walls on Red Square.

Russia’s annexation of the Russian-occupied areas of Donetsk, Luhansk, Kherson and Zaporizhzhia has been condemned in the West and beyond. U.N. chief Antonio Guterres called it was a “dangerous escalation” and a violation of the United Nations charter.

“It can still be stopped. But to stop it we have to stop that person in Russia who wants war more than life. Your lives, citizens of Russia,” Ukrainian President Volodymyr Zelenskiy said in a Thursday evening address.

The Russian annexation, held after what the West denounced as phoney referndums at gunpoint in occupied territory, followed weeks of defeats for Moscow’s forces on the battlefield in which they were routed from their positions in Ukraine’s northeast.

Military experts said Russia could soon be facing one of its biggest defeats of the war so far, with thousands of troops trapped in Lyman, the last major Russian stronghold in the north of Donetsk province. The town’s fall would pave the way for Ukraine to recapture swathes of land Russia is now claiming.

Kyiv has so far kept silent about the situation there, but Russian military bloggers have described the Russian force as all but surrounded, with advancing Ukrainians having cut off the last possible routes of escape.

“Possible that the pocket collapses tonight or tomorrow, which would overshadow the annexation announcement,” tweeted Rob Lee, an expert on the Russian military and senior fellow at the Foreign Policy Research Institute.

Since his troops were forced to flee from Ukraine’s Kharkiv province, Putin has chosen to escalate the war. Last week he endorsed the annexation, ordered the call-up of reservists, and threatened to use nuclear weapons if Russia is attacked.

Russian officials, including Foreign Minister Sergei Lavrov, have explicitly said the threat of nuclear retaliation would apply to any attacks on the areas they plan to annex, despite the thousand km-long (600 mile) frontline through it.

Ukraine has said it will take back all its territory.

Zelenskiy promised a strong response to the annexations and summoned his defence and security chiefs for an emergency meeting on Friday where “fundamental decisions” will be taken, an official said.

On the eve of the annexation ceremony in the Georgievsky Hall of the Great Kremlin Palace, Putin said that “all mistakes” made in a call-up announced last week should be corrected, his first public acknowledgment that it had not gone smoothly.

Putin’s call-up order gave no details of who must be drafted. Russian officials have publicly said older men or those with no military experience should by exempt, but call-up notices have been given to men of all ages and background. Members of ethnic minorities say they have been particularly targetted, leading to unrest in southern Russia and Siberia.

At Friday’s event, Putin will give a speech and meet Kremlin-backed leaders of the four regions. Kremlin spokesman Dmitry Peskov did not say whether Putin would attend the concert, as he did at similar event in 2014 after Russia proclaimed it had annexed Ukraine’s Crimea region.

A stage has been set up in the Moscow square with giant video screens and billboards proclaiming the four areas part of Russia.

“The results were manufactured in Moscow,” Biden said at a conference of Pacific Island leaders on Thursday.

U.N. Secretary General Guterres told reporters: “Any decision to proceed with the annexation … would have no legal value and deserves to be condemned.”