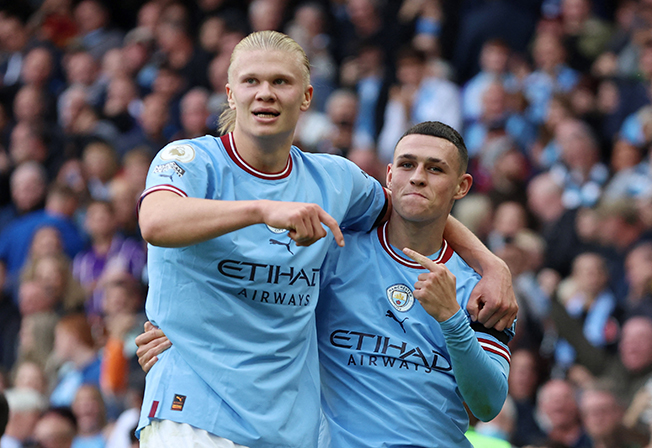 GULF BETWEEN MANCHESTER CLUBS AS LARGE AS EVER

Manchester United fans will have gone into their derby clash with champions Manchester City on Sunday in buoyant mood after a run of four successive league wins, including successes over Liverpool and Arsenal, in the run-up to the fixture.

But for all United’s recent progress, City operate in a different realm to their local rivals, and put them to the sword with a thumping 6-3 victory at the Etihad Stadium thanks to hat-tricks from Erling Haaland and Phil Foden.

The margin of victory does not tell the true tale of the gulf between City and United and just how big a job coach Erik ten Hag has got to get his new side back fighting for titles with the imperious champions across the city.

“We will have setbacks during our process and we have to learn from it,” Ten Hag said. “We can walk away from it, but if we ignore our problems we will not get the solution.”

LIVERPOOL CONTINUE TO BE PLAGUED BY SLOW STARTS

There are only so many times even the best sides in world football can come from behind to win matches. Liverpool are no different.

There have been some thrilling late victories in the league and Champions League already this term at Anfield, but Saturday proved a step too far, as the Reds gave Brighton & Hove Albion a two-goal headstart in their 3-3 draw.

That is now nine times in their last 11 league games Liverpool have conceded first, something that has played a huge part in their lowly position of ninth in the standings, having taken 10 points from seven matches this season.

“We want to get the confidence back,” coach Juergen Klopp said. ” The first goal and second goal did not help that. The set-up of Brighton surprised us but before we adapted we were 2-0 down. We have to do better.”

Arsenal’s flying start to the season was accompanied by an asterisk as they had not yet beaten any of the so-called big six in their march to the top of the table.

But that can now be removed after a 3-1 home win over a Tottenham Hotspur side who were previously unbeaten in the league.

Admittedly, Spurs gave Arsenal a helping hand with a calamitous second-half display but the hosts were the better side in all departments throughout the game.

Arsenal coach Mikel Arteta is not getting carried away though, with the Spaniard saying: “The table says what it says and we don’t look at that.”

But if his side beat Liverpool at the Emirates next week even he might start taking a peek at the standings.

Chelsea’s new manager Graham Potter enjoyed a winning start in his first Premier League game in charge of the Blues but the problems that beset his predecessor Thomas Tuchel were evident in their last-gasp 2-1 comeback win at Crystal Palace.

Chelsea created few clear-cut chances and allowed Palace to take the lead with their first proper attack of the game, assisted by errors in the back line.

Former Brighton & Hove Albion boss Potter described his start at Chelsea as “decent” as Pierre-Emerick Aubameyang’s and Conor Gallagher’s first goals for the club on Saturday – both beautifully taken – offered some encouragement.

But Potter’s results tally of a 1-1 Champions League draw at home to Salzburg and a narrow win on Saturday at Palace show just how much work he still has to do.

NEWCASTLE FINALLY WIN ON THE ROAD

Newcastle United fans’ cry of “Howay the Lads” is one of the more famous in English football and a first away win this season for Eddie Howe’s team at Fulham on Saturday gave the ‘Toon Army’ something to cheer on their travels.

The supporters who made their way from the north-east to London had to contend with heavy traffic and train strikes but those who made it to Craven Cottage got to see their side win 4-1 against 10-man Fulham to move into the top seven.

If Howe’s team are to make it back to the promised land of European football and competing for titles they will have to ensure this is the first of many wins on the road this season.