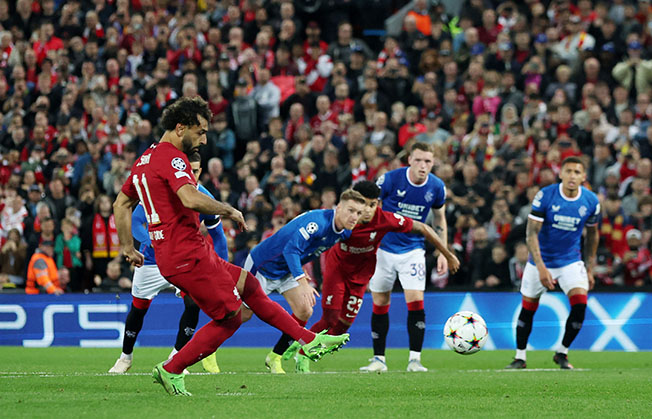 Liverpool put their recent stutters behind them to comfortably beat Rangers 2-0 in the Champions League on Tuesday and move into second spot in Group A.

The win, thanks to a sumptuous first-half free kick from Trent Alexander-Arnold and a second-half penalty by Mohamed Salah, put the six-times European champions on six points after three games – three points behind leaders Napoli.

The Scots, who barely threatened Liverpool to the disappointment of their passionate fans complete with a bagpipe-player, remain bottom of the group on zero points.

In need of a morale booster after their poor start to the Premier League, Liverpool’s four-man attack of Salah, Diogo Jota, Luis Diaz and Darwin Nunez swarmed over Rangers from the off. By contrast, the visitors’ Colombian striker Alfredo Morelos was largely isolated.

Spurs, who lost 3-1 to London rivals Arsenal in the Premier League on Saturday, had plenty of opportunities through Harry Kane, Son Heung-min and Ivan Perisic, especially in the first half, but have now gone seven European away matches without a win.

It was also the fifth straight game in the competition that they did not score in the first half.

Europa League winners Eintracht and Tottenham are both on four points from three matches, with Sporting Lisbon in top spot on six despite their 4-1 loss to bottom club Olympique de Marseille, who have three points.

Six of the best as Napoli hand Ajax record defeat

Giacomo Raspadori netted twice as Napoli came from behind to deliver a masterclass and score a runaway 6-1 win at 10-man Ajax Amsterdam in the Champions League on Tuesday.

Captain Giovanni di Lorenzo, Piotr Zielinski, Khvicha Kvaratskhelia and substitute Giovanni Simeone added the other goals for the Italian league leaders, after Mohammed Kudus had given the hosts the lead inside the opening 10 minutes.

Napoli, who might have scored more such was their dominance, have a 100% record at the halfway point in Group A, leaving Ajax with three points from their opening three games and in stark danger of missing out on next year’s knockout stages after their biggest defeat in European football.

Ajax coach Alfred Schreuder had warned on the eve of the game about the attacking threat that Napoli posed but, even then, would not have expected his team to be so thoroughly outsmarted.