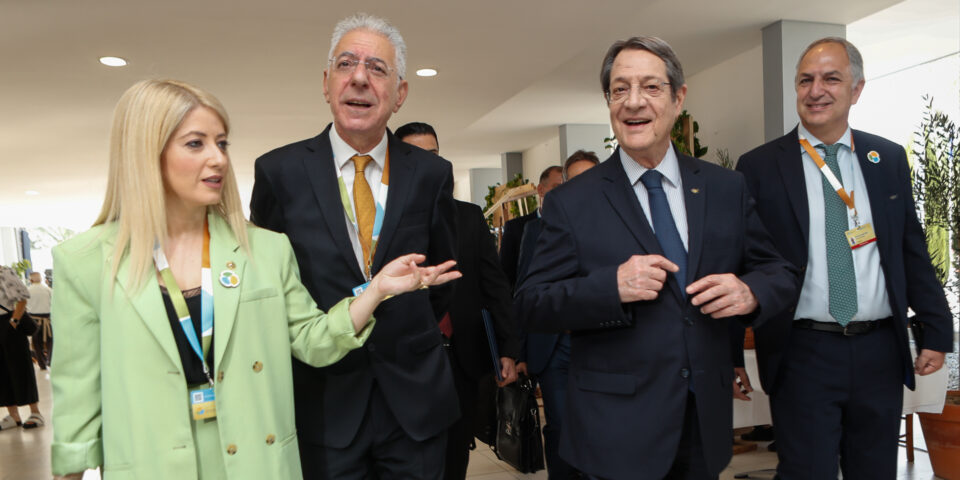 Europe should show “far greater ambition” on climate change because its overall greenhouse gas emissions are still rising, and so countries must embrace recycling, tighten air quality and spend more on the environment, a UN report delivered in Nicosia said on Wednesday.

Cuts in emissions mostly in western European countries have been offset by rises elsewhere in the region, a United Nations assessment of strategies among 54 European nations found.

Air quality still falls short of international guidelines, and taxes collected in the name of environmental protection were not being used for their stated purpose, the report presented to European environment ministers meeting in Nicosia said.

“The findings of this assessment .. must be a wake-up call for the region,” said Olga Algayerova, executive secretary of the United Nations Economic Commission for Europe, known as the UNECE.

Algayerova said that she hoped that by offering countries a forum for closer regional cooperation on environmental issues it can once again deliver important outcomes as it has done in the past.

“It is so painful to recognise that our region is once again facing another divisive and tragic crisis: the war in Ukraine, which devastation to the lives of so many people,” she said.

“This war also puts regional cooperation mechanisms like the Environment for Europe to the test. Will we be able to pursue common goals, whether global or regional, sectoral or cross-cutting, in such circumstances?”

Algayerova expressed the hope that stakeholders in the region can rise above their differences in an effort to work together towards common goals.

“The Nicosia conference must answer these questions. I hope the answer will be clear and unequivocal: yes, we have common goals, and yes, we are able to cooperate to achieve them together. The Environment for Europe process has done this in the past and can do so in the future if we act – together,” Algayerova said.

For his part, President Nicos Anastasiades told the conference that it is imperative to adopt meaningful measures to counter climate change.

Taking place at the Filoxenia Conference Centre in Nicosia, it is the first time the conference is being held in a Mediterranean country.

“Given how critical time is, it becomes imperative to take effective decisions, as well as adopt and implement meaningful measures and policies, through which the sustainability of the planet will be ensured,” he said, adding that he was glad that the conference was taking place in Cyprus, as it is one of the most sensitive and vulnerable to climate change.

The conference, which will run until October 7, is being attended by 71 ministers, several high-level officials and over 1,000 participants from the public and private sector, academia and youth groups, coming from 60 countries, as well as representatives from more than 150 international and regional organisations and NGOs.

The summit will touch on three critical pillars.

The first section is linked to the need for major infrastructure projects to be consistent with the goals of sustainable development and respect for the environment, as defined in the goals of the United Nations 2030 Agenda for Sustainable Development.

The second section concerns the application of the principles of the circular economy in tourism, with the aim of reducing the environmental impact of the sector, through the reduction of energy consumption and greenhouse gas emissions, as well as the more efficient management of sewage and waste.

The last, and equally important, pillar is related to the new strategy framework for Education for Sustainable Development, through the creation of educational organisations that will raise awareness among young people and support the effort to achieve the goals of the Global Agenda 2030.

Anastasiades said that Cyprus’ initiative to tackle climate change is also manifested in a series of other initiatives, such as the presidency of the United Nations coordinating committee for education, but also important other initiatives, including the positions adopted by ministers at a recent meeting in Sharm El Sheikh, where the Climate Change Summit, COP27, will take place.

He said that at COP27, he and his Egyptian counterpart Abdel Fatah El-Sisi will be heading the conference, and they will present the findings of hundreds of scientists that have prepared specific reports and deal with the eastern Mediterranean and neighbouring countries.

He added that the summit is of the ‘utmost importance’ for sustainable environmental development, with its declarations constituting a point of reference for the formulation of the policies of the participating countries.

“Hosting the summit in the Republic of Cyprus is a special honour, since it is being held for the first time in the Mediterranean, one of the most vulnerable regions affected by climate change, and known to be the most sensitive and vulnerable worldwide,” he told participants.

Regarding actions taken in Cyprus, he said: “In order to immediately address the challenges that we as a state face, the Cypriot government prioritised the formation and adoption of a coherent and holistic environmental policy.”

Outlining the objectives of the government policy, Anastasiades said they have place as priorities the protection of biodiversity, the reduction of the effects of pollution on public health and ecosystems, the adoption of the principles of the circular economy, the rational management of our natural resources and the effective contribution to combating climate change.

“At the same time, characteristic of the concern and sensitivity of the state to deal with the effects of climate change, is the fact that through the National Recovery and Resilience Plan, 41 per cent of the total budget of the said fund concerns reforms and actions amounting to more than €500 million for the transition to the green economy and climate neutrality,” he said.

He added that related Green Development projects amounting to €350 million, are also included in the EU Structural Funds for the period 2021-2027.