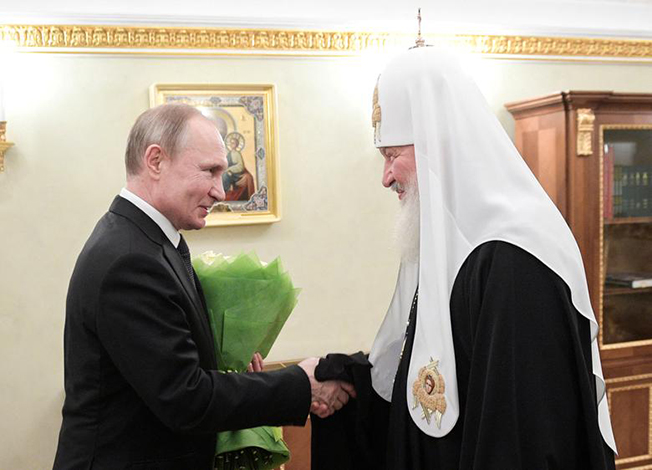 President Vladimir Putin turned 70 on Friday amid fawning congratulations from subordinates and a plea from Orthodox Patriarch Kirill for all to pray for the health of the longest-serving paramount leader of Russia since Josef Stalin.

Putin, who rose to the Kremlin’s top job on the last day of 1999, is facing the biggest challenge of his rule after the invasion of Ukraine triggered the gravest confrontation with the West since the 1962 Cuban Missile Crisis. His army there is reeling from a series of defeats in the past month.

On his birthday, Putin is due to attend an informal summit of the Commonwealth of Independent States in St Petersburg, the former imperial capital founded by Peter the Great that is his hometown.

Obsequious officials hailed Putin as the saviour of modern Russia while the patriarch of Moscow and All Russia implored the country to say two days of special prayers so that God grants Putin “health and longevity”.

“We pray to you, our Lord God, for the head of the Russian State, Vladimir Vladimirovich, and ask you to give him your rich mercy and generosity, grant him health and longevity, and deliver him from all the resistances of visible and invisible enemies, confirm him in wisdom and spiritual strength, for all, Lord hear and have mercy,” Kirill said.

Putin, who vowed to end the chaos which gripped Russia after the 1991 fall of the Soviet Union, is facing the most serious military crisis any Kremlin chief has faced for at least a generation since the Soviet-Afghan war of 1979-89.

Opponents such as jailed opposition leader Alexei Navalny say that Putin has led Russia down a dead end towards ruin, building a brittle system of incompetent sycophants that will ultimately collapse and bequeath chaos.

Supporters say Putin saved Russia from destruction by an arrogant and aggressive West.

“Today, our national leader, one of the most influential and outstanding personalities of our time, the number one patriot in the world, President of the Russian Federation Vladimir Vladimirovich Putin, turns 70 years old!” Chechen leader Ramzan Kadyrov said.

“Putin has changed the global position of Russia and forced the world to reckon with the position of our great state.”

But the war in Ukraine has forced Putin to burn through vast amounts of political, diplomatic and military capital.

More than seven months into the invasion, Russia has suffered huge losses in men and equipment and been beaten back on several fronts within the past month as Putin’s army has lurched from one humiliation to the next.

Putin has resorted to proclaiming the annexation of territories only partly under Russian control – and whose borders the Kremlin has said are yet to be defined – and threatening to defend them with nuclear weapons.

A partial mobilisation declared by the president on Sept. 21 has unfolded so chaotically that even Putin has been forced to admit mistakes and order changes. Hundreds of thousands of men have fled abroad to avoid being called up.

Even normally loyal Kremlin allies have denounced the failings of the military – though they have stopped short, so far, of criticising the president himself.

Putin finds himself confronted with a resurgent, united and expanding NATO, despite his insistence that the “special operation” in Ukraine was aimed at enforcing Russian “red lines” and preventing the alliance from moving closer to Russia’s borders.

Signs of disquiet have emerged from China and India, on which Russia is increasingly reliant as geopolitical and economic partners in the wake of successive waves of Western sanctions.

Reflecting on Putin’s birthday, former Kremlin speechwriter Abbas Gallyamov said: “On an anniversary, it’s customary to sum up results, but the results are so deplorable that it would be better not to draw too much attention to the anniversary.”

Putin has dominated Russia for nearly 23 years since being handpicked by President Boris Yeltsin as his preferred successor in a surprise announcement on New Year’s Eve 1999.

Having clamped down aggressively on the opposition, independent media and NGOs, and with his leading critic Navalny facing years in jail, his position has until now appeared unassailable. Changes adopted to the constitution in 2020 paved the way for him to rule potentially until 2036, and there is no obvious front-runner to succeed him.

He maintains a full schedule of meetings and public events and invariably appears in control of his brief, holding forth at length in video conferences on topics ranging from energy to education. The Kremlin has denied recurrent speculation about alleged health problems.

As he has grown older, Putin has appeared increasingly preoccupied with his legacy. In June he compared his actions in Ukraine to the campaigns of TsarPeter the Great, suggesting both of them were engaged in historic quests to win back Russian lands.

Putin has become increasingly fond of quoting Russian philosopher Ivan Ilyin, who argued that Russia had an exceptional mystical and holy path to follow that would ultimately restore order to an imperfect world.

In a televised encounter with teachers this week, Putin showed a keen interest in another episode from history – an 18th century peasant revolt against Empress Catherine the Great – that he blamed on “the weakness of central authority in the country”.

From the man who has dominated Russia for more than two decades, it sounded as though a lesson had been taken to heart: faced with the possibility of rebellion, the ruler needs to be both strong and vigilant.

Innovations in Cyprus Education System in 2022