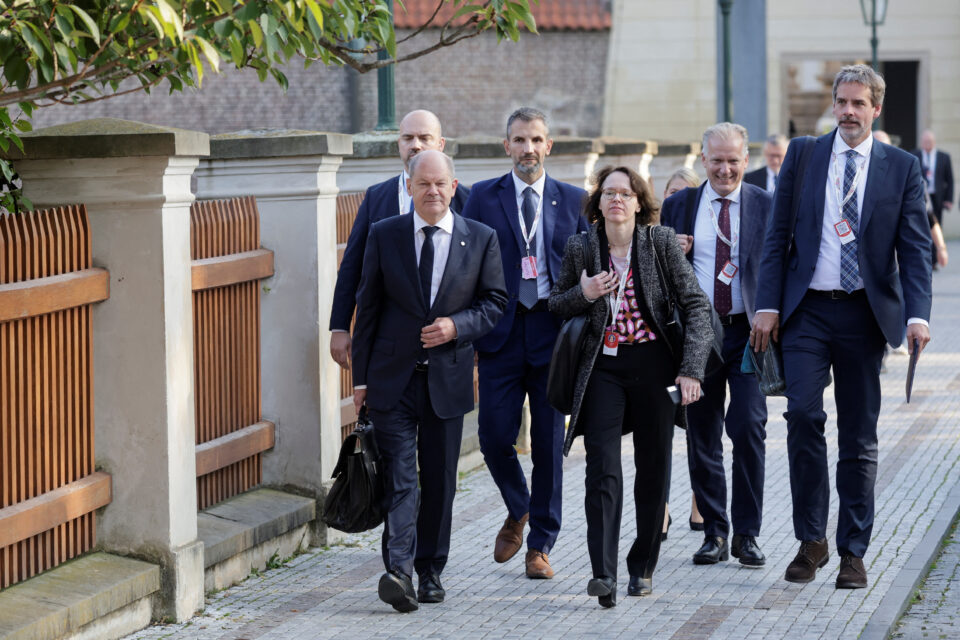 European Union leaders on Friday agreed to give more financial and military aid to Ukraine, but a full day of talks in Prague’s ornate royal castle seemed to bring them no closer to deciding on whether or how to cap gas prices.

Most of the EU’s 27 countries want a cap on gas prices, but disagree on details, with options including a cap on all gas, a “dynamic corridor”, a price ceiling on gas used for power generation specifically or on Russian gas only.

The EU has been discussing the matter for weeks, so far without result, although the 27 have agreed other joint steps to help them weather an acute energy crunch as runaway prices threaten to bring about a recession in the bloc.

“Everyone agrees we need to lower power prices but there is no agreement what instruments to use to that end exactly,” said Poland’s Prime Minister Mateusz Morawiecki.

Ireland’s premier, Micheal Martin, also said that “lots of work needed to be done” still before an agreement emerges.

Italy’s Mario Draghi said the bloc’s executive European Commission would present for the next meeting of EU leaders on Oct. 20-21 a broader package of short-term measures to lower prices and longer-term steps to redesign the electricity market.

The cap is one of a range of proposals and initiatives by European states to cope with plummeting gas supplies from Russia, which once supplied 40% of Europe’s needs, and rocketing prices TRNLTTFMc1. They have eased off this year’s peaks but remain more than 200% higher than at the start of September 2021.

Germany, Denmark and the Netherlands oppose a cap, worried that it would make it difficult to buy the gas their economies need and dampen any incentive to reduce consumption.

As differences between EU countries over ways to alleviate the energy crisis played out, Warsaw also lashed out at Berlin over the latter’s plan to spend up to 200 billion euros ($196 billion) in subsidies to shield German consumers and businesses from soaring energy costs.

“The richest country, the most powerful EU country is trying to use this crisis to gain a competitive advantage for their businesses on the single market. This is not fair, this is not how the single market should work,” Morawiecki said.

German Chancellor Olaf Scholz said the gathering cleared “misunderstandings” about Berlin’s package, which he defended as the right thing to do, adding that France, the Netherlands and others had their own support measures in place as well.

A GENERATION TO REBUILD UKRAINE

Seven months after Russia invaded Ukraine – a former Soviet republic that now wants to integrate with the West – the bloc managed to show unity in vowing continued support for Ukraine.

“We are determined to mobilise all possible tools and means to support Ukraine with financial means, with military support, with humanitarian support and of course with political support,” said the summit’s chairman, Charles Michel.

The head of the European Commission, Ursula von der Leyen, said the bloc would back Ukraine “as long as it takes”.

That came after Ukrainian President Volodymyr Zelenskiy addressed the EU leaders through a video link.

“Russia brought war to our land… And only thanks to the fact that the Ukrainian people stopped this invasion by Russia, Russia cannot yet bring the same war to other parts of Europe, in particular, the Baltic countries, Poland, and Moldova,” Zelenskiy said, according to a transcript on his website.

He called for more air systems to defend Ukrainian energy infrastructure from Russian strikes, for international pressure to remove Russian troops from the Zaporizhzhia nuclear power plant in occupied Ukraine, and for funds to rebuild Ukraine.

The bloc’s top diplomat, Josep Borrell, said earlier in the day he wanted the bloc to earmark more money for military support for Ukraine, including for training, and that specific proposals on that could be approved later this month.

Scholz said Germany would make an important contribution to the European training mission but, ahead of an Oct.25 international conference in Berlin on the matter, also warned that rebuilding Ukraine would take a generation.