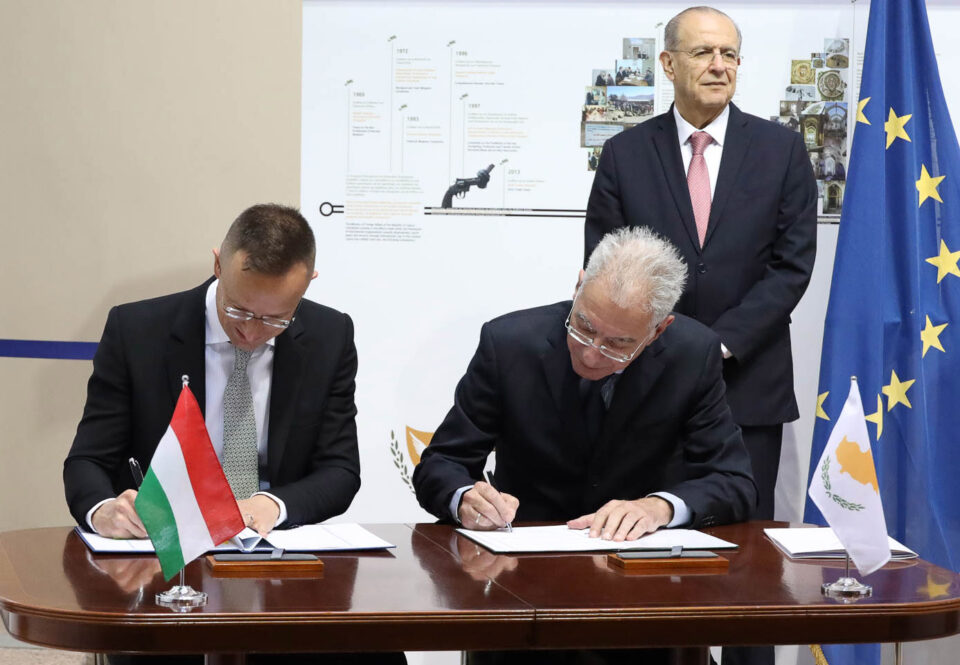 Cyprus can be a part of the solution to the energy crisis in Europe, Hungarian Foreign Minister Peter Szijjarto said on Monday, during a meeting with his Cypriot counterpart Ioannis Kasoulides.

“We need more natural gas to be delivered to Europe on more routes. That is why, instead of sanctions and instead of price caps, we want new sources to be involved in the European gas market and new delivery routes to be built, that is, new pipelines and new LNG ports,” Szijjarto said.

He added that he believes Cyprus can be a big opportunity for Europe, due to the large natural gas finds found off the coast of the island.

The two ministers met in the morning.

In remarks later, Szijjarto said Europe is “gripped by war rhetoric…which takes us farther away from the hope of peace in Ukraine. The longer the war lasts, the more Europe will suffer, and the more we stand to lose, as we face huge challenges in terms of security, the economy and energy supply.

“Unfortunately,” he went on, “sometimes I get the sense that only a few of us have maintained common sense on this issue.”

Noting that Cyprus was one of those countries who have “not lost their common sense”, the Hungarian FM said that is why it is possible to speak with Cypriots with mutual respect and rationality.

Szijjarto took a swipe at Brussels’ reaction to the energy crisis, saying the steps taken only serve to reduce the volume of natural gas available on the European market and thus bring about a further rise in prices.

After his meeting with Kasoulides, Szijjarto met with Education Minister Prodromos Prodromou to sign a memorandum of understanding (MoU) for further cooperation in higher education and research.

For his part, Kasoulides said the agreement signed on Monday in Nicosia, as well as the MoU on tourism cooperation concluded in Budapest last week, are the latest examples of the ‘enhanced partnership’ between the two countries.

Kasoulides said he and Szijjarto had a “frank exchange of views” about pressing matters on the European agenda, such as migration.

He expressed satisfaction at the increased air connectivity between Cyprus and Hungary.

On this, Szijjarto said the number of Hungarian tourists traveling to Cyprus has increased by 70 per cent compared to the last year prior to the Covid outbreak.

Budapest’s top diplomat also that, given that some 3,000 Hungarian nationals reside in Cyprus, his government intends to expand its consular presence here.

Construction the most lethal occupation