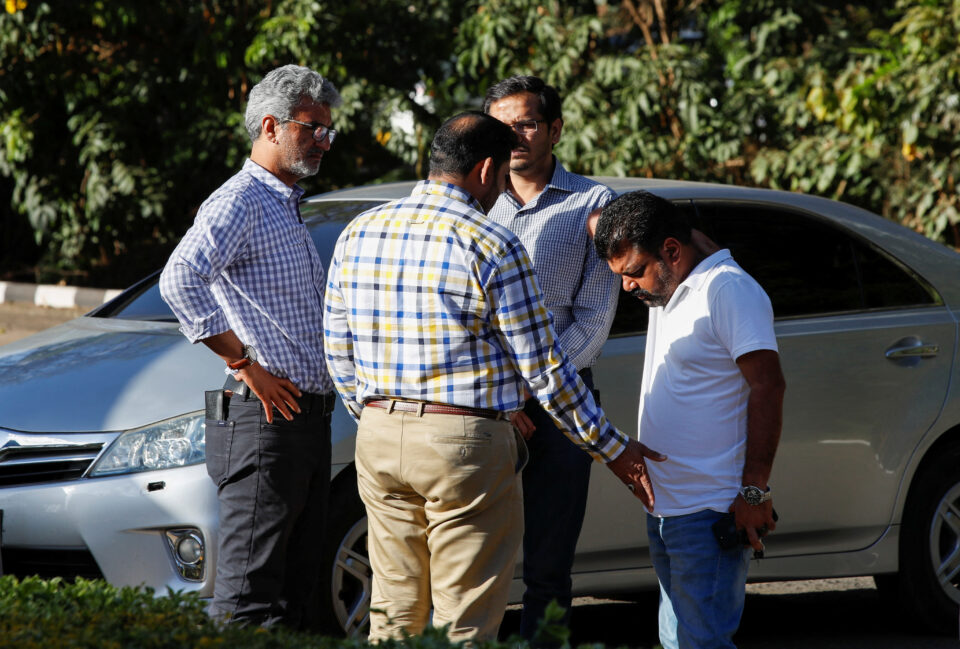 Unidentified Pakistani embassy officials gather at the Chiromo Mortuary, following the killing of Pakistani journalist Arshad Sharif who was shot dead when police opened fire on the vehicle as it went through a roadblock without stopping, in Magadi road on the outskirts of Nairobi, Kenya, October 24, 2022. REUTERS/Monicah Mwangi

Well-known Pakistani journalist Arshad Sharif was shot dead in Nairobi when police hunting car thieves opened fire on the vehicle he was travelling in as it drove through their roadblock without stopping, according to a Kenyan police report on Monday.

A Kenyan police watchdog has said it is investigating the incident, which happened at 10 p.m. (1900 GMT) on Sunday on the outskirts of the capital.

A senior police officer told The Star newspaper that the shooting was being treated as a case of mistaken identity. The circumstances of Sharif’s death sparked widespread outrage in Pakistan and calls for an investigation.

Sharif worked for many years as a prime time television news show host for ARY News in Pakistan and had recently fled the country citing threats to his life. It was not immediately clear when he had arrived in Kenya.

The police report said a relative of Sharif had been driving the car. It said police had formed a roadblock using small stones, but the car drove through without stopping, even after officers opened fire. Nine bullets hit the car, and one hit Sharif in the head.

“There’s an alleged police killing of a Pakistani national at Tinga market, Kajiado county, last evening. Our rapid response team has already been dispatched,” she said.

Pakistan’s foreign ministry said its high commissioner in Kenya was in touch with local police and the foreign office and a police report is awaited.

Pakistan Prime Minister Shehbaz Sharif said on Twitter that he had spoken by phone to Kenyan President William Ruto about the incident.

“I requested him to ensure fair and transparent investigation into shocking incident. He promised all-out help including fast-tracking the process of return of the body,” said the prime minister, who is not related to the victim.

Sharif’s death sparked widespread reaction on social media in Pakistan from officials, journalists and others.

Former prime minister Imran Khan condemned the death and said Sharif had been murdered for his journalistic work. He called for a judicial investigation into the incident.

Washington also urged Kenya to investigate. “We’re deeply saddened by the death of Arshad Sharif. We encourage a full investigation by the government of Kenya into his death,” U.S. State Department spokesperson Ned Price told reporters.