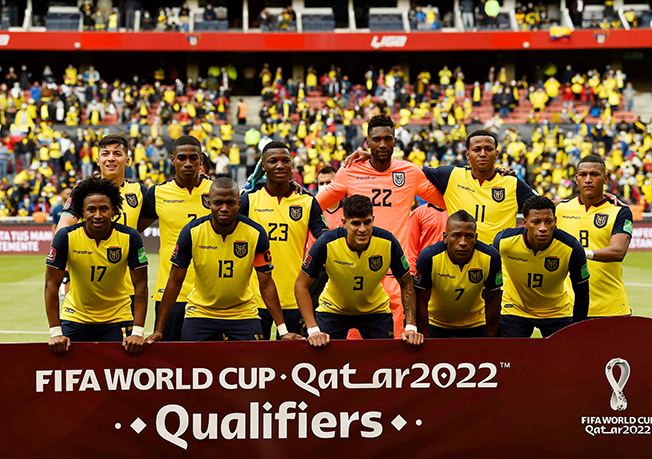 Ecuador may be rank outsiders at the World Cup but their potent young team cannot wait for the world’s eyes to be on them when they face hosts Qatar in the first match after the Nov. 20 opening ceremony at the 60,000-capacity Al Bayt Stadium.

Having hauled themselves out of the gruelling and crowded South American qualifiers only behind heavyweights Brazil, Argentina and Uruguay, “La Tri” are arriving for an impressive fourth World Cup appearance from the last six.

They will be confident of beating even more unfancied Qatar and inflicting a first defeat on hosts in a World Cup opener.

“When I saw Ecuador versus Qatar come out of the draw, I said to myself, ‘Wow, the whole world will be watching that one’ and it’s a massive privilege,” said their Argentine manager Gustavo Alfaro.

“I’m a devout Christian and I told the boys that there’s a reason why it’s worked out as it has and we’re involved in the opening game after so many sacrifices.”

A win over Qatar would give Ecuador confidence of matching higher-ranked Senegal before probably their biggest challenge against Netherlands in a fascinating, four-continent Group A.

A former player and commentator, Alfaro has in the last two years revolutionised Ecuador’s ageing squad, successfully scouring at home and abroad for new talent like Piero Hincapie, Moises Caicedo and Gonzalo Plata.

That meant Ecuador had the lowest average age – 26 years and 10 months – in the South American qualifiers and also fielded six players under 20, more than any rival.

But Alfaro has kept proven stalwarts too, not least captain Enner Valencia, 32, who they will look to for leadership and goals. Known as “Superman” at home, Valencia is Ecuador’s record scorer, with three goals at the 2014 World Cup in Brazil.

Despite a confidence-boosting qualifying campaign – big-scoring wins over supposedly superior opposition Uruguay and Colombia and draws against Brazil and Argentina – Ecuador are still relieved to be at the Qatar finals.

They risked expulsion after Chile claimed Ecuador fielded an ineligible player. After FIFA dismissed the case, the Court of Arbitration for Sport (CAS) will hear the Chilean football federation’s appeal on Friday.

Alfaro is already buzzing before the Qatar game.

“Just before kick-off, you can be sure that I’ll be looking up to the sky and my loved ones – my mum, dad and sister, who are up there, and my agent, Daniel Comba, who has now left us but who told me that I’d lead a team out at the World Cup – to let them know that I’ve made it and am on the world stage.”

In Britain’s inflation crisis, healthy diets are a casualty

Messi on World Cup mission in ‘Last Dance’ for Argentina