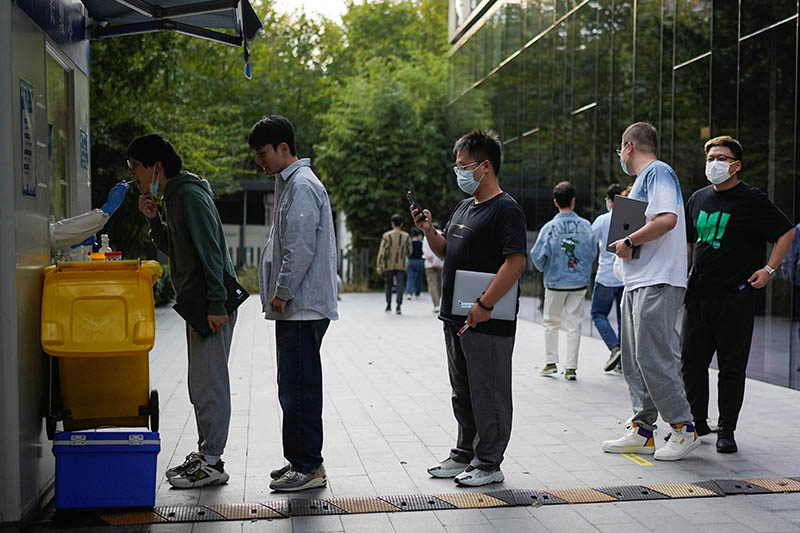 People line up to get tested for the coronavirus disease in Shanghai, China, November 3, 2022. REUTERS/Aly Song

China on Friday reported the highest daily count of new local COVID cases in six months as outbreaks widened, pushing policymakers to walk an even finer line between holding the virus at bay while keeping a lid on social and economic angst.

New locally transmitted cases rose to 3,871 on Thursday, according to regular data released by the National Health Commission, the highest since early May when Shanghai was fighting its worst outbreak and Beijing was scrambling to contain one.

Bloomberg News reported on Friday that China was working on plans to scrap a system that penalises airlines for bringing virus cases into the country, citing people familiar with the matter, saying the effort was a sign authorities were looking for ways to ease the impact of its COVID policies.

China has yet to describe when or how it will begin to exit from its current approach. Earlier this week, Chinese shares jumped after rumours that China was planning a reopening from strict COVID curbs in March.

Domestic tensions have steadily built this year as the endless curbs, restrictions and lockdowns fuelled unhappiness.

The central city of Wuhan, where the pandemic began, has imposed an array of temporary lockdowns and restrictions after double-digit new cases were reported in the past week.

Videos showing rowdy protests inside a compound in Wuhan’s Hanyang district on Thursday night were shared on social media on Friday, with angry residents seen smashing down COVID disaster relief tents and calling for an end to their lockdown.

Crowds in the videos, which Reuters could not immediately verify, can be heard shouting, “Give us freedom, give us freedom!”

On Wednesday, an industrial park that houses an iPhone factory of Foxconn2317.TW entered a seven-day lockdown due to COVID, in a move likely to intensify pressure on the Apple supplier as it scrambles to quell worker discontent at the base.

The lockdown marks a re-tightening of measures in the central city of Zhengzhou, which unexpectedly lifted a quasi-lockdown on its nearly 13 million residents just the day before.

Also this week, posts on rapidly rising food prices in Xining, the capital of Qinghai province in China’s northwest, and a lack of access to daily essentials because of lockdowns went viral on social media.

A video on the Twitter-like microblog Weibo showed two residents handing cartons of milk and bags of vegetables to an elderly woman who, according to the post, could not buy groceries for three days after the city shut most shops at the end of October.

On Tuesday, a 3-year-old boy died from carbon monoxide poisoning in the northwestern city of Lanzhou, a tragedy that his father said was “indirectly” because strict COVID policies had caused delays in obtaining treatment.

The hashtag, “Three years of COVID was his entire life”, became a trending topic on Weibo before being scrubbed from the site.

The Lanzhou government and department of health did not respond to requests for comment.

On Friday, the city of Ordos in the Chinese region of Inner Mongolia said it will “draw lessons” from the recent “problems” uncovered in epidemic prevention in some places in China.

“You have the right to take measures to save yourself, or to avoid danger in a timely manner,” it said in a statement.

Barbs traded over who has president’s support