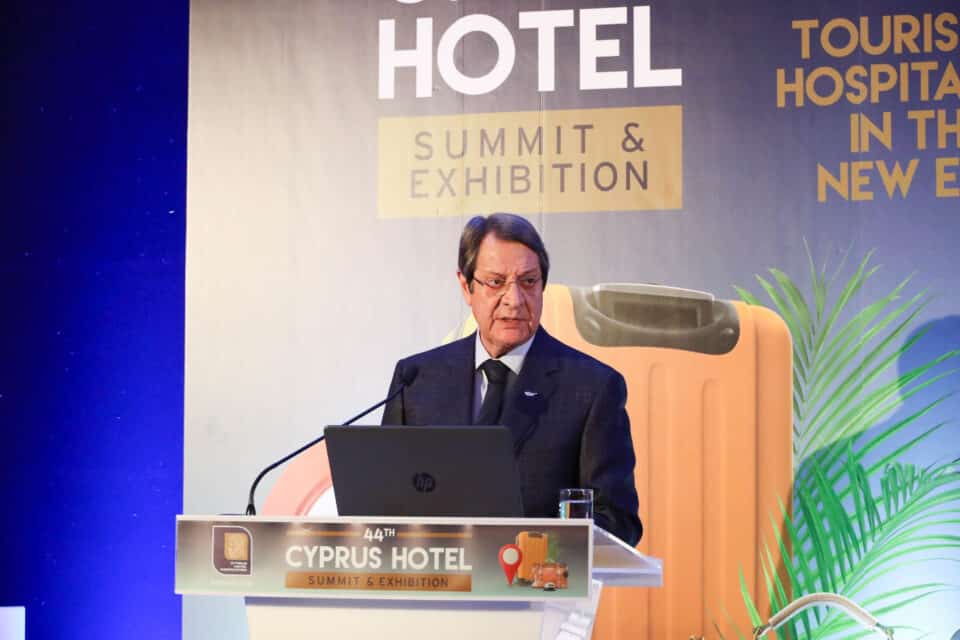 The tourism sector showed ‘tangible growth’ in 2022, which was on Tuesday put down to increased air connectivity and policies introduced by the government over the last 10 years at the annual Cyprus Hoteliers Association (Pasyxe) conference.

In his opening speech, President Nicos Anastasiades said despite the adversities posed by the ongoing war in Ukraine and the effects of the Covid-19 pandemic, as well as the rising cost of living, the sector’s growth in 2022 was “a sign of many correct government policies”.

Arrivals this year are expected to be 80 per cent of those seen during the record and pre-pandemic 2019, while revenue from the sector is expected to hit 87 per cent of that of the same year, Anastasiades said.

“The government has considered tourism as a key factor for the country’s growth for the past ten years, no matter the challenges and the increasing demands of a complex industry,” he added.

Anastasiades called the decision of creating a deputy ministry of tourism during his presidency “historical”, as it paved the way for the implementation of important reforms within the industry.

“The first four years of the deputy ministry’s operation radically changed tourism in Cyprus. At the same time, during difficult situations, such as the one posed by the pandemic, it allowed the government to support people working in the industry.

“Thanks to the National Tourism Strategy 2020-2030, the sector managed to greatly contribute to the country’s GDP growth, while attracting more and new visitors and improving our society’s living standards,” the president concluded.

He also said fruitful cooperation between the public and private sectors has been crucial to improving the economy in addition to bringing tangible results for stakeholders and visitors alike.

His words were echoed by Pasyxe president Haris Loizides, who underlined the transport ministry’s role in attracting new visitors to Cyprus and in offering incentives to improve existing tourist infrastructures.

“Over €600m worth of grants and incentives were allocated by the government specifically for the refurbishment and renovation of infrastructures within the hospitality sector,” Loizides said.

Loizides added that inter-ministerial cooperation also resulted in the crucial support to industry workers throughout the repeated Covid-19 lockdowns.

“We survived two extremely tough years and came out stronger. Now we have added interest from new markets, as well as several airlines. Cyprus is firmly on the map,” he said.

Finance Minister Constantinos Petrides also took part in the summit, recalling the difficult years at the beginning of the Anastasiades government.

“The hospitality sector and the tourism industry needed a complete revamp,” he said. “Building incentives changed the game, as did the complete overhaul in the way hotels were categorised, which was frankly obsolete.

“The goal was to make Cyprus a point of reference in terms of tourism for the Eastern Mediterranean region and for Europe in general. We needed quality tourism, which was the main reason behind the institution of the deputy ministry of tourism,” he added.

Over the last 10 years the tourism product has completely changed, he said, as a result of joint efforts by the public and the private sector. “Cyprus is now an excellency in the tourism world. Our product was renewed and the sector is more dynamic than ever,” Petrides said.

The impact of opening the island up to other markets and the future of aviation in Cyprus were also discussed at the meeting.

On Monday, Ryanair announced five new routes to Paphos airport starting next summer, as well as an increase in the airport-based fleet from two to four aircraft.

It also invested an additional €400 million in Cyprus, aimed at creating 120 new aviation jobs and 1,500 related jobs at Paphos airport.

“Ryanair’s plan to increase its presence in Cyprus started as soon as Covid-19 hit, in preparation for an eventual recovery,” Ryanair director of commercial operations Jason McGuinness said on Tuesday, adding that the low-cost carrier became the first ever airline to fly over 3,000 passengers to and from the island within a day, which it achieved last summer.

“We are now carrying 70 per cent more tourists to Cyprus compared to 2019, before the arrival of the pandemic. This is a testimony of the island’s potential.

“Over the past years, and especially after the hard lockdown months, we started targeting new markets, especially in the East. They represent a big growing opportunity for us.”

In October, Wizz Air said it had brought around 400,000 tourists to Cyprus so far this year and the goal is to double that by the end of 2022.

Cyprus Airways’ CEO Paul Sies added that Cyprus is in need of a national carrier, after the failure of past airlines.

“The island needs year-round connectivity. Ryanair and Wizz Air are currently filling the gaps, but we do need to learn from our mistakes and offer a viable solution to people living in Cyprus, who need a home-based carrier,” he said, adding that the airline was severely hit by the pandemic and by the war in Ukraine.

Finally, Tus Airways’ Ahmed Aly said Cyprus is a priority for the company, despite cancelling many flights this year due to the higher living costs impacting the sector.

“We are a relatively new airline, but we understand the importance of Cyprus. Our main focus is connecting the island to Israel, currently its third biggest market,” Aly said, adding that new routes connecting Cyprus to other destinations will be unveiled in December.

Presidential candidate sets out vision ‘Cyprus 2035: One and Green Cyprus’