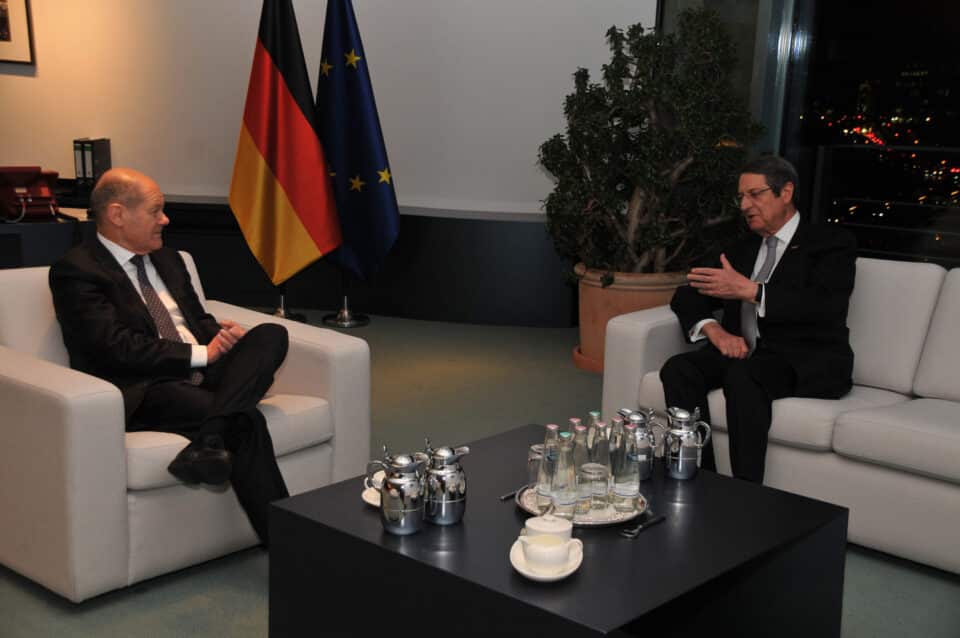 Cyprus and Germany both want to strengthen and broaden their consistently excellent relations, President Nicos Anastasiades said on Wednesday after meeting with German Chancellor Olaf Scholz.

In post on social media after the meeting, Anastasiades said: “I want to warmly thank my friend the German Chancellor Olaf Scholz for hosting me and our constructive talks. Our common goal is to further strengthen and broaden the consistently excellent relations between our countries and people, on a bilateral and European level.”

Regarding the Cyprus issue, President Anastasiades clarified before that “there is no possibility of a solution on the basis of what Turkey unjustifiably and against international law is claiming needs to be a two-state solution.”

Anastasiades called on Ankara to change its stance, since, as he said, “prolonged tension will exacerbate Turkey’s relations with the EU, with the insistence on a solution that is not based on UN resolutions. The only thing Turkey will achieve is its exclusion.”

During their meeting, Anastasiades and Scholz discussed the Cyprus problem, and focused on European, energy and economic issues.

On his part, Scholz said that he was in favour of a solution to the Cyprus problem based on a bizonal, bicommunal, federation.

He added that Germany would do whatever possible to have Cyprus talks restart based in international law.

Commenting further, he said: “The relationship between the Republic of Cyprus and Turkey is important and the problems should be solved based on dialogue and international law.”

Both agreed to cooperate further in the energy sector and in the migration issue.

Earlier in the day and after meeting German President Frank-Walter Steinmeier at Bellevue Palace, Anastasiades said that Cyprus and the Eastern Mediterranean region can become an alternative source of energy resources for Europe, President Nicos Anastasiades said after a meeting with.

During their meeting the two presidents discussed issues related to bilateral relations, developments regarding the situation in Ukraine, with Anastasiades also briefing the German president on the current situation of the Cyprus issue.

The issue of migration was also on the table. Anastasiades told the German president that the number of asylum seekers on the island is currently equivalent to 6 per cent of the total population of Cyprus.

Anastasiades signed the presidential palace’s visitors book before holding private talks with Steinmeier. Further discussions also included government spokesman Marios Pelekanos, the undersecretary to the president Petros Demetriou, the ambassador of the Republic to Germany Maria Papakyriakou and the director of the president’s office Pantelis Pantelides.

On Thursday at noon, he is also scheduled to hold a private talk with Germany’s former Chancellor Angela Merkel.

African leaders agree on ceasefire in east Congo from Friday