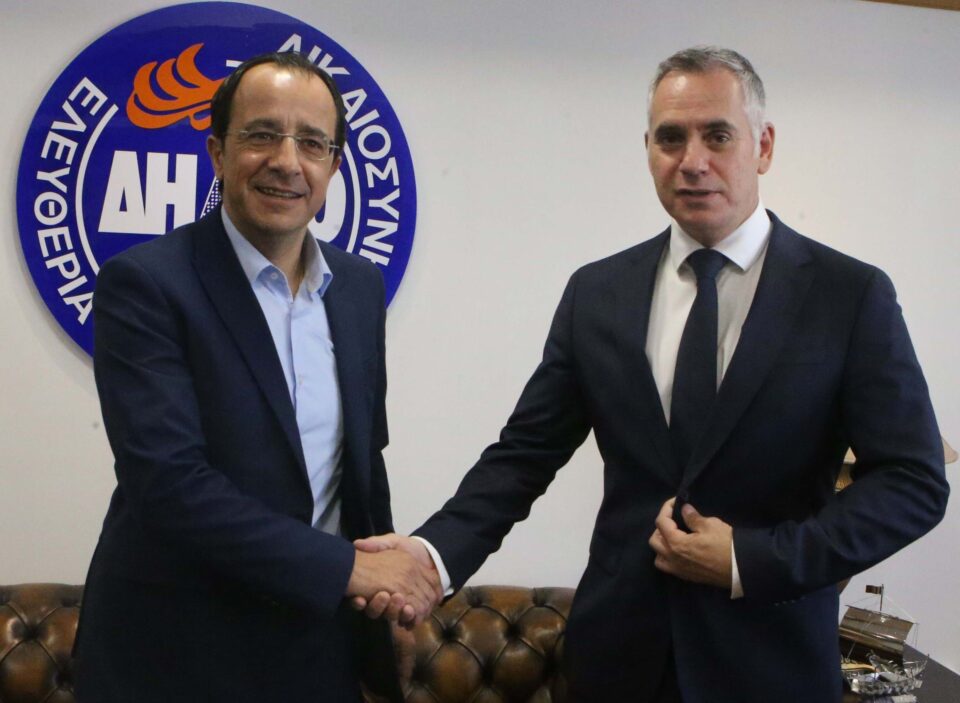 The island’s former Foreign Minister and current presidential frontrunner Nikos Christodoulides allegedly came to a secret agreement with centrist party Diko in return for the party’s backing in the elections, local media reported on Sunday.

According to a Politis report, Diko allegedly set specific conditions for Christodoulides in return for supporting his candidacy, such as Christodoulides making a personal commitment not to create his own political party.

The Politis report claimed that the latest developments were revealed through a leaked document that is an ad hoc note prepared during the phase of the beginning of the negotiations between the two sides, with the aim of achieving cooperation in the presidential elections.

“This document clearly reflects DIKO’s great fear of the possibility that Nicos Christodoulides will proceed with the establishment of a political party,” the report stated.

Diko also demanded continued cooperation with Christodoulides in the event of him failing to get elected, with the aim of managing the “challenges which may arise in the event of defeat in the presidential elections,” Politis said.

According to the ad hoc document, in such an event, Christodoulides will not establish his own political party but will cooperate with Diko, Politis stated.

Politis went on to state that it was told by a member of Diko that in the event of defeat, it would also mean Christodoulides’ name on the EU parliament MEP ballot for Diko or even as the party’s mayoral candidate for one of the island’s main towns when elections come round in two years time.

The plans as noted in the document focus on the political positions of Diko and Christodoulides, any divergences in beliefs and how to deal with such instances through a well-honed communications machine which would deal with chiseling his political image in an ongoing PR campaign.

“The document mentions some political divergences between Diko and Nicos Christodoulides – arising mainly from his participation in the outgoing government and the party’s position as the opposition,” Politis said.

For this reason, it goes on to explain why Diko makes it imperative to create commonly accepted approaches to the main political issues such as the Cyprus problem and corruption and Christodoulides’ involvment, according to the report.

“The note mentions five points in which difference exist between the two sides on the Cyprus problem. These are related to the joint statement between Anastasiades and Eroglu from February 11, the development of negotiations at Crans Montana, references to discussions for a two-state solution, the opening of the fenced-off area of Varosha and the handling of the hydrocarbon exploitation,” Politis states.

For the handling of the above political divergences, the document suggests using competent staff from both sides, as well as mention of an attempt to determine the moods and willingness of either side to distance themselves from earlier positions.

According to Politis, from Christodoulides’ public statements, it appears he has kept Diko happy so far on that score to a large extent. On specific issues, such as the UN chief Guterres’ framework, Christodoulides refuses to be tied down, repeating Diko’s well-known on the topic when he is pressed to take a stance.

Meanwhile, the ad hoc document seems to deem the handling of the citizenship by investment programme (golden passports) as problematic and makes reference to President Nicos Anastasiades’ personal involvment and Christodoulides’ close working relationship with his former boss.

However, on this topic, it does not seems as though the two sides came to agreement.

The second part of the document deals with the election period “from day one of the first round of elections until the day of round two and sets out two basic scenarios – one being Christodoulides’ failure to make it to the next round, in which case the party and Christodoulides will be called upon to decide which candidate to back in the second round of voting.

In the second scenario and Christodoulides’ victory, “Diko demands agreement for consultations between the party and the candidate on how to approach the other candidates and political parties who will cooperate during the second Sunday of voting,” Politis reported.

The report adds that Diko also wants “commitment to agree beforehand to the positions that will be taken between all sides.

In the third section of the document, it examines the period after the second round of voting and lays out again two scenarios.

In the event of a Christodoulides defeat, “the handling of the political environment will be full of challenges, thus for better management, it is important that cooperation with Nikos Christodoulides continues, and that he commits to not create his own political party,” the document states.

The above position would remain the same in the event of their candidate’s victory in the elections, in which case, Diko also demands comprehensive involvement in the running of the government.

“According to the document, the depth and breadth of the party’s participation in a Christodoulides government would need to be determined,” Politis reported.

Politis noted that the ad hoc document was written up in April, the same month that Diko’s executive office confirmed the floundering of talks with Akel for cooperation in the elections.

Meanwhile, Diko on Sunday was quick to issue a statement strenuously denying the claims made in the report by Politis newspaper.

“The newspaper Politis presents today a supposedly “secret agreement between DIKO and Christodoulides”. There is no such agreement and of course there is no such document and there has never been. It is a made-up document which was apparently made by the newspaper itself. Unfortunately, the newspaper “Politis” manages once again to surpass the levels of yellow journalism to which we are accustomed. We leave it to the judgment of the citizens,” Diko said in a statement.