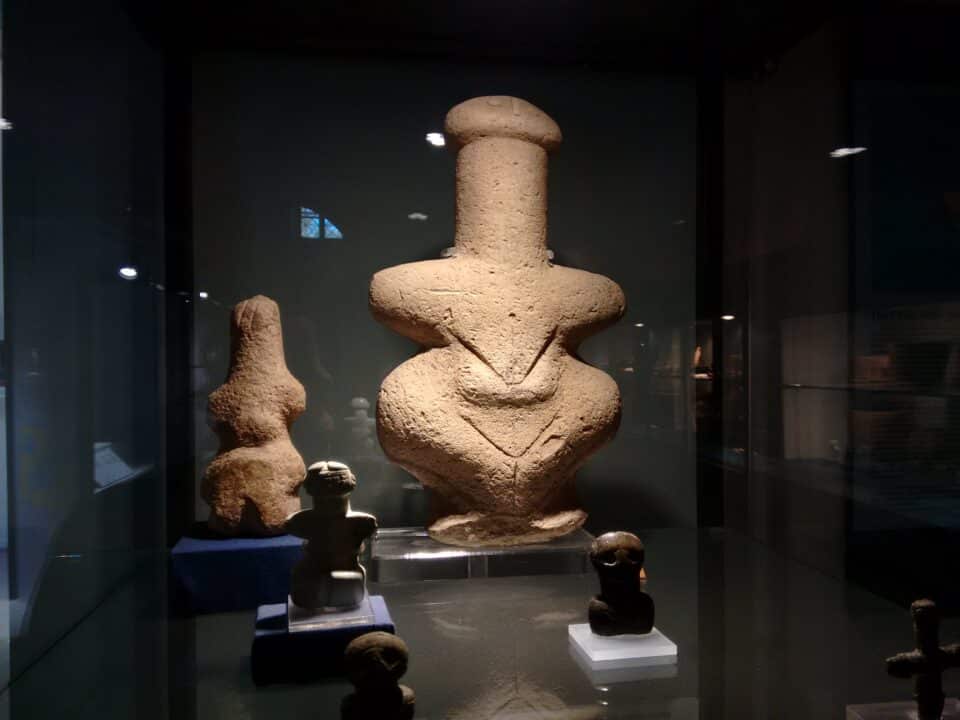 Endless videos on the internet portray one of Cyprus’ most famous artefacts as the Goddess of Death – great story, but they are all hoax

Clicking on a random YouTube video about the world’s ten most cursed objects – as you do when the devil makes work for idle hands – there we were at Number 1, ahead of Annabelle the killer doll, the Hope Diamond and James Dean’s death car. Wait, what?

Cyprus is top of a list in the land of urban legend as the place of origin of not only the Goddess of Love but also the ‘Goddess of Death’, better known in archaeological circles as the Lady of Lemba. It’s not a new urban legend, but it is one that has gained new traction this past year. One video, ‘Top 5 Cursed Items The Government Tried To Lock Away’, was posted only last month.

These videos are numerous and have millions of views. Sometimes the ‘Lady of Lemb’ – they all leave out the ‘a’ – is in the Top 10, the Top 5 and in some, it even nabs the top spot. Scores of websites all tell the same story about one of Cyprus’ most famous archaeological artefacts.

In official circles, the Lady of Lemba is a 36cm high limestone figurine, dating to the Chalcolithic period or some 3,500 BC. She is described as “a naked, pregnant woman with short, outstretched arms, a high phallic neck supporting her raised head, or a fertility symbol that may be a remote ancestor of Aphrodite”.

The image is familiar in Cyprus and is used as the logo on the website of the Lemba community council and has been reproduced as jewellery and statuettes.

“They call it The Goddess of Death, but its real name is the Woman from Lemb. This curious artefact, a statue carved from pure limestone, was unearthed in Lemb, Cyprus in 1878,” writes one website.

You can almost hear an ominous voice as if it were a movie trailer.

“No one knows what it is, exactly. However, the statue is far better known for the mysterious, and deadly, effects it has on its owners.”

It’s hard to know what it is more unfortunate, the bad reputation the figurine has garnered online or the number of fictitious people it’s killed. At least the start date of British rule is correct, but the statue was actually discovered in the 1970s.

The story goes that the statue has belonged to at least four different families, and each one was wiped out except the last lot because they cottoned on before they all died and “donated it to the Royal Museum in Edinburgh”.

None of these people existed. Not one.

For an unspecified amount of time after that, the statue apparently vanished, “until it wound up in the hands of Sir Alan Biverbrook. He, his wife, and their two daughters were next to die.”

“But before the seemingly cursed artefact could finish its dark work, Biverbrook’s two surviving sons donated the statue to the Royal Scottish Museum in Edinburgh. To top off the mystery, the museum curator who handled the statue died within a year. And so the Woman from Lemb now rests, guarded from the world behind glass. Or, should I say, we are guarded from it.”

Legend has it that so scary is the statue the museum does not even have it listed on its inventory. That’s probably because it’s not actually there.

Never mind, paranormaljunkies.net is convinced. “Every now and then you come across something with so much evidence to back it up that it turns the most sceptical person into a believer,” it says and goes on to repeat the story with no evidence.

A website called obsidianportal takes it a step further, authoritatively stating that the figurine was found at the bottom of a mass grave, passed through the hands of a series of collectors and was even seized by the Nazis during World War II.

According to the author, it is currently owned by a wealthy American, Alexander DeLong in Amherst, Massachusetts. He doesn’t exist either.

It only takes five minutes to find out that the Lady of Lemba is displayed in the Cyprus museum, is not on any inventory at any Scottish museum, and even the person who led the team that discovered it, Professor Edgar Peltenburg from the University of Edinburgh, lived 40 years after it was found, and died at the age of 74 in 2016.

The obsidianportal then descends into what else but the tale of a witch who was burned at the stake in Lemba but got her revenge when sparks from the fire set the village alight and burned the place down. The villagers had created the figurine to bind the witch’s power, but something went awry. “At daybreak, all that was left of the burned-out village were the ruins of huts, a pit filled with charred bodies and the figurine atop the ashes.”

Back in the real world, a catalogue of an exhibition held at the Getty museum in Malibu in 1990 speaks about the figurine, which was then on loan from the Cyprus museum.

Oddly, the catalogue describes the Lady of Lemba as “disturbing” but doesn’t specify why.

It was found “in a building that was otherwise distinguished by its isolated position in an earlier burial ground and on a terrace edge. That location suggests the building’s special status, since other buildings were clustered,” it says. The Lady of Lemba was probably not a burial item of the time.

The location where it was found was of considerable importance, the catalogue adds. “Unequivocal evidence” from Lemba and from surveys confirms a major crisis in the Paphos region with “the ultimate settlement at Lemba destroyed by a fire…”

There is no mention of witches though.

Thoukidides Chrysostomou head of the Lemba community council was totally unaware that their prized artefact was being defamed online. Stating the obvious he said: “This is nonsense. The Lady is ready to give birth. This is a positive not a negative connotation. She has nothing to do with death. It’s the opposite.”

But Diane Bolger, a research fellow at the University of Edinburgh – at least there is a real Edinburgh connection – who has been working 20 years with the Archaeological Research Centre in Lemba, and to whom the Sunday Mail was referred by an archaeologist there, is aware of the internet nonsense.

“It’s been annoying me for years,” she said. Bolger confirmed that there had been a fire in a couple of the ancient Lemba buildings but there was a 300-year gap between that and the earlier date of the Lemba Lady. “There is no correlation,” she added.

A bigger mystery was why no further figurines of this type appear to have been made. “Why stop making them?” Bolger says.

There is also an ongoing academic debate about the gender of ancient statues. One of the papers Bolger has written is titled: ‘Beyond male and female: Recent approaches to gender in prehistoric Cypriot archaeology’.

Others in academia are also taking this approach so it could turn out in time that a consensus will form that the Lady of Lemba is not even a lady after all. But that’s a whole other story.