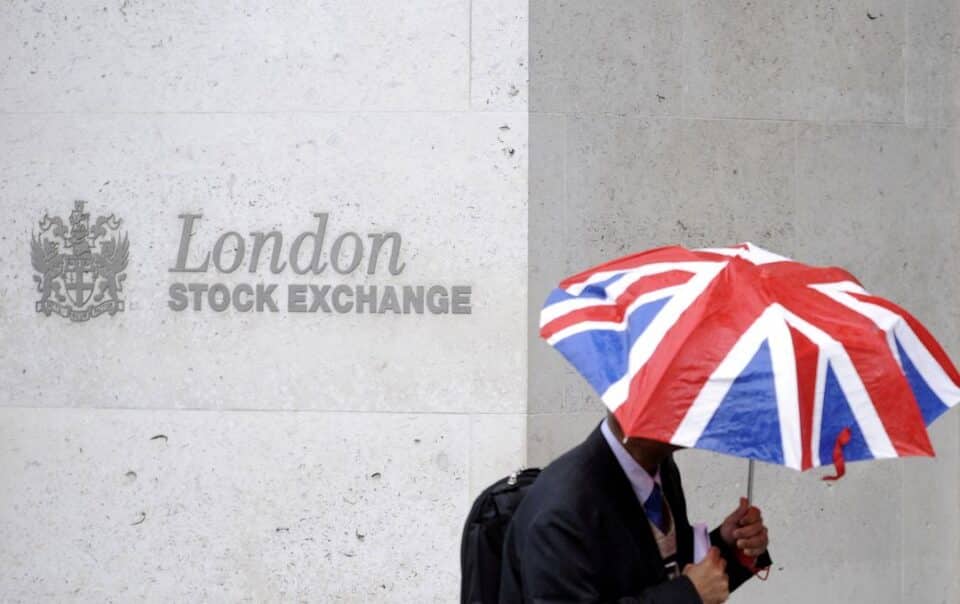 Paris’ luxury-laden stock exchange is now worth more than London’s. But although size matters, there are other indicators highlighting the UK capital’s popularity with investors.

While the UK has seen a larger exodus from equity funds since 2020 than Paris, companies have raised more money in initial public offerings (IPOs) in London and more shares change hands in British markets every day.

France’s CAC All Shares index (.PAX) is now worth almost $3 trillion, making it Europe’s largest stock market by value thanks to demand for its luxury-retailer blue chips. (.FRCG)

London’s FTSE All-Share index (.FTAS), meanwhile, is worth $2.8 trillion, according to Refinitiv data. 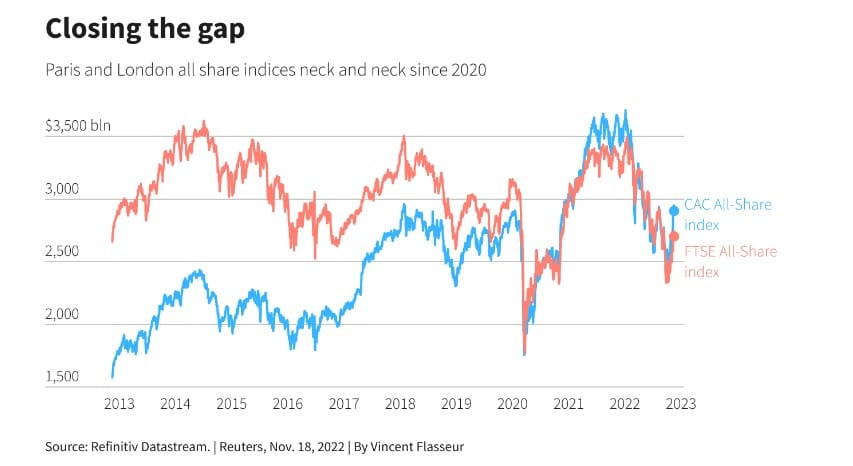 So far in 2022, funds investing in UK stocks have seen record outflows of 23 billion euros, according to Refinitiv Lipper, up from almost 18 billion euros last year and the 14.6 billion euros shed in 2016, when Britain voted to leave the European Union.

Annual outflows from French equity funds are much smaller – at 2 billion euros this year. 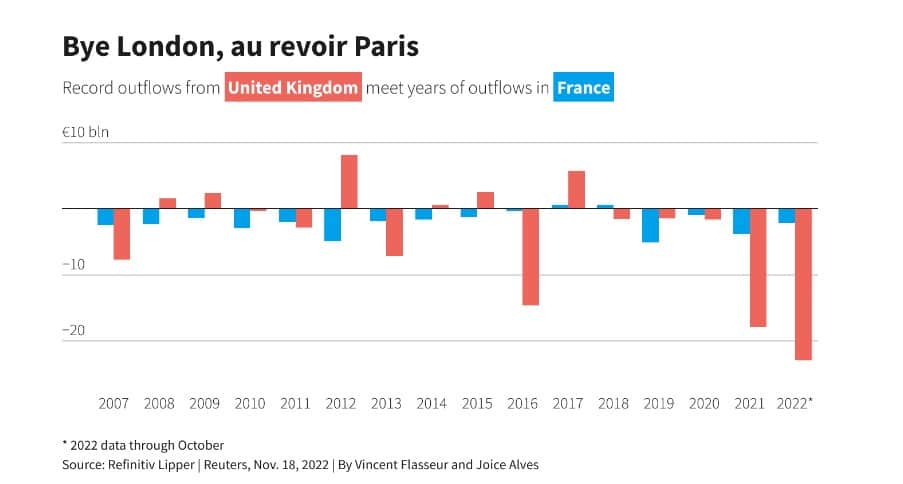 But London remains a much larger destination in terms of number and volume of initial public offerings, even with IPO volumes down 80 per cent in Europe this year from last and more than 90 per cent in the United States, according to Dealogic.

After recording in 2021 its second strongest year for company listings since 2007, the London Stock Exchange has seen 41 debuts with a total deal value of 1.18 billion euros ($1.22 billion) so far in 2022, more than double the 474 million euros raised in 11 IPOs in Paris, according to Dealogic.

Amsterdam – Europe’s largest centre by average daily value traded according to CBOE data – has only seen two IPOs so far this year totalling 411 million euros, according to Euronext. 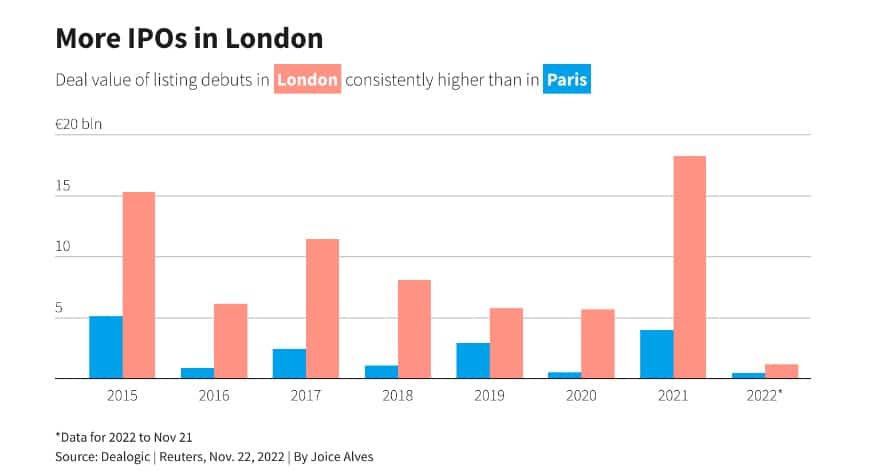 In a volatile stock-market environment, Paris can count on large privately held stakes in its companies to offer some stability.

“For an institutional investor from an investability standpoint, the amount of free float that is still out there, the UK is still significantly bigger,” said Ben Laidler, global macro strategist at eToro.

Indeed, Paris’ three biggest shareholders are private investors: the Arnault family, who own half of LVMH – Europe’s largest company by market capitalisation – the Hermes family and the French government. In comparison, the world’s largest asset manager Blackrock leads the way in London.

In terms of market activity, Amsterdam’s average daily value traded was more than 10 billion euros in October, with London a close second at 9.4 billion – about the same as Paris and Frankfurt combined, according to the data from CBOE Global Markets.

Undermining London is the discount at which the FTSE All-Share index trades relative to world stocks (.MIWO00000PUS), which since the Brexit referendum in 2016 has grown to near its largest since 1990, at 35 per cent on a price-to-earnings metric. 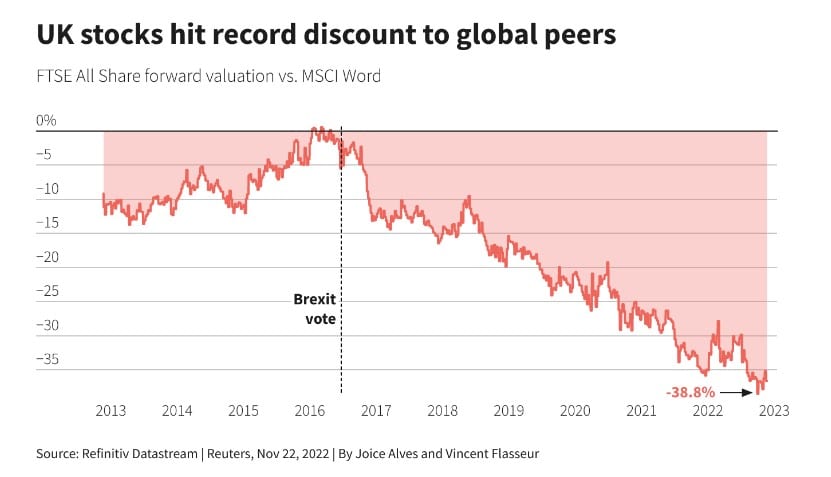 Energy-heavy London wins big when it comes to dividends. In the third quarter, UK companies paid out $28.7 billion, more than seven times the total paid in France, according to Janus Henderson Investors’ Global Dividend Index.

London’s FTSE All-Share has also delivered better returns to investors this year. Total annualised returns for the index are 2 per cent, compared with returns of almost minus 6 per cent for the CAC All Shares, according to Refinitiv data.

It’s also worth noting that currency comes into play when measuring the size of London’s market against Paris’ in dollar terms. Sterling has fallen around 11 per cent against the US dollar this year, while the euro has lost around 9 per cent.