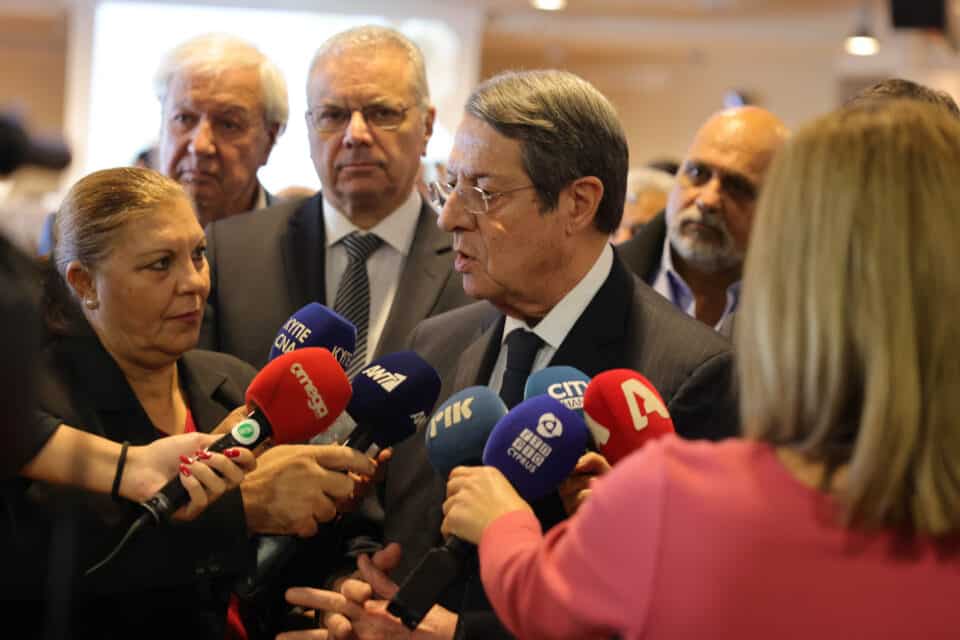 President Nicos Anastasiades on Tuesday said the government, and the president cannot remain indifferent on claims on corruption, with the anti-corruption authority set to investigate allegations made in books by former presidential adviser Makarios Droushiotis.

The author said in three recently published volumes that corruption was rife across all levels of government.

“It is not possible for anyone to make allegations that present the President as being involved in acts of corruption or even criminally punishable and for the competent authorities to remain indifferent,” Anastasiades said.

He added he has sent a letter to the anti-corruption authority saying that it is imperative that it be involved.

Government Spokesman Marios Pelekanos said Anastasiades had called on Transparency Commissioner Harris Poyiadjis, who heads the anti-corruption authority, to investigate claims made in the books The Gang (I Simmoria), Crimes at Crans Montana (Egklima sto Kran Montana), and The Mafia State (Kratos Mafia).

Following the investigation of the claims, Poyiadjis will report his findings, Pelekanos said.

In comments to CyBC radio in the morning, Poyiadjis said that the anti-corruption authority has received 20 complaints that they will be investigating.

Among them, he said were Droushiotis’ books, and another large box file submitted by a female journalist on behalf of someone else, both of whom remained anonymous.

Poyiadjis said that the file contained information on a number of processes being followed in the public sector, and that the claims will need to be looked into.

Commenting on the box file, he said that it also contained citations of various laws that were violated, and that if an investigation is deemed necessary, they will have to look into certain individuals.

He added that on Friday, parliament will be presented with the operational regulations that the commission will need to abide by.

Droushiotis’ claims surfaced after a meeting between presidential candidate Andreas Mavroyiannis and Poyiadjis, but Anastasiades said he is not bothered a former presidential adviser (Mavroyiannis) brought these claims to the authority’s attention.

“I have already sent a letter which instructs, invoking the articles provided for in the law for the establishment of the Anti-Corruption Authority, it is mandatory [the authority] now gets involved because it is not possible for anyone to make allegations that show the president as being involved in acts of corruption or even criminally punishable and remain indifferent,” Anastasiades said.

Commenting further on Mavroyiannis, he said that Mavroyiannis did not file a complaint, he just said that it should be investigated.

“If I find fault somewhere, it is that an experienced diplomat, when the president is on an important mission abroad, does not create problems that can diminish the importance of the visit, in the sense of undermining the effort of the president abroad. Nothing beyond that,” he said.

On Monday, Mavroyiannis called for everything in Kratos Mafia to be investigated.

Following a meeting with Poyiadjis, Mavroyiannis said if he is elected he will make sure that the authority has all the proper tools to operate.

Poyiadjis said that investigations would be announced when they began for transparency but results were not expected before the presidential elections in February.

“We need to prove ourselves [as an authority],” he told CyBC.

They added that until today, Anastasiades had not refuted the allegations made in the book.

“Now, under the pressure of Andreas Mavroyiannis’ initiative, who asked the Anti-Corruption Authority to investigate all the testimonies and complaints of Makarios Droushiotis, Mr Anastasiades is asking for an investigation,” the party said.

The party also pointed a finger at two other presidential candidates, Nikos Christodoulides and Averof Neophytou.

“The silence of the two candidates Averof Neophytou and Nikos Christodoulides on the issue is deafening,” it said.

Having one of them as president would be the continuation of a corrupt regime, the party added.

In response, Pelekanos called on Akel to abandon nihilism and not forget its own “unbreakable political prisoners”.

He said it was an Akel MP who was featured in the Al Jazeera video and not a member of the government and called on the party to read the statements it issued when the same author referred to Russia’s responsibility for the Cyprus problem.

“The president does not need admonitions… [and] does not hesitate to call for an ex officio investigation of even malicious unsubstantiated and false allegations,” Pelekanos said.

He reminded that the regulations of the anti-corruption authority have not yet been passed by parliament.