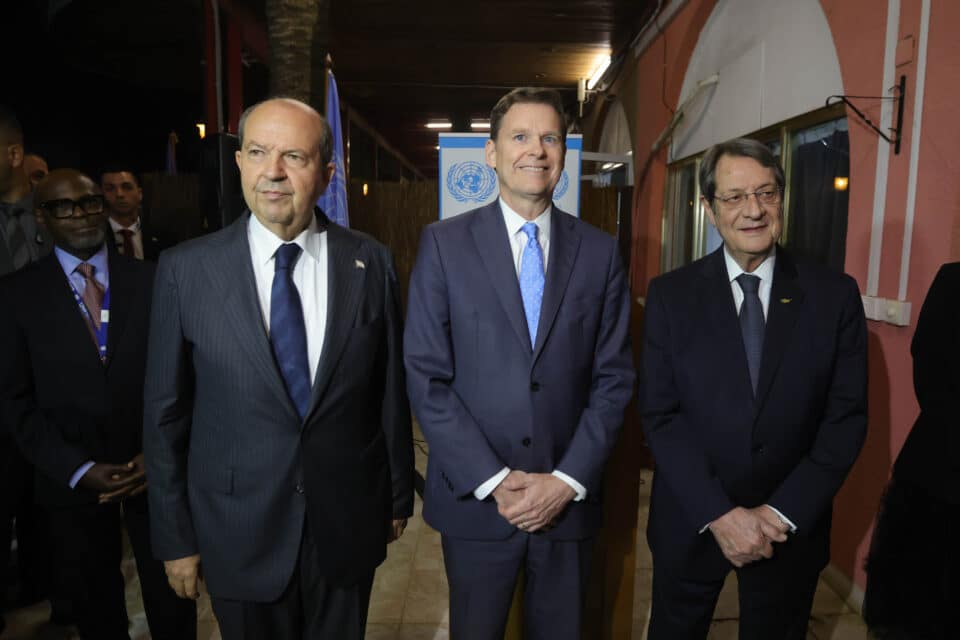 Anastasiades and Tatar at a reception hosted by Stewart in December

The two leaders met for the first time after seven months at a reception hosted by UN special representative in Cyprus Colin Stewart on Wednesday night. There, they spoke for about ten minutes and were photographed together.

However, there was no discussion on the substance of the Cyprus problem, government spokesman Marios Pelekanos told radio Trito.

He added that the two leaders agreed to meet again and indicated that it is very important to keep the dialogue open. President Anastasiades’ readiness for the resumption of talks and his initiative to engage the European Union is well known, to prevent new deadlocks and to prepare the ground for a return to the dialogue table.

Referring to the Turkish Cypriot claim for a separate agreement with Unficyp, he stressed the republic will not accept such an agreement. The UN rejected the Turkish claim but remains in consultation on how to continue its work based on security council resolutions.

The importance to keep the dialogue open was also stressed by the head of the peacekeeping force Colin Stewart, during his speech at the reception the previous night. He noted that there is great potential for a solution to the Cyprus problem. Despite the challenges, the United Nations in Cyprus will not relax its efforts to help the two sides reach a common ground, he said.

The UN special envoy also mentioned some ‘achievements’ that brought the communities closer.

Despite 2022 being a year of challenges there were nevertheless achievements, Stewart said, and praised the bi-communal technical committees for their perseverance in finding common ground in a wide range of areas for common benefit, despite any obstacles.

The UN official said, among other things, that a sustainability study on waste management of electronic and electrical appliances had been completed and referred to the increase in the volume of trade between the two sides under the Green Line Regulation.

For the first time this year there was trade in processed food of non-animal origin, Stewart said, while it was reported that 2022 might be a record high for trade between the two sides.

Meanwhile, he said that over the last ten years, there has been permanent electrical interconnectivity, mobile interoperability and the opening of new border crossing points.

He added that the two sides have advanced proposals for confidence building and cooperation. Elements of these proposals have dominated his discussions with the T/C special representative and the G/C negotiator, he said, adding that they continue to explore the possibilities of moving forward with initiatives where there is common ground.

The crossing points show the benefits of increased contacts according to the UN official, who said such contacts remain vitally important in keeping alive the hope of a mutually agreed solution to the Cyprus problem.

“The work you all are doing is extremely important and commendable. With the continued support of the leaders, we will continue our weekly meetings with the representatives of the two leaders and continue to support the technical committees to develop new agreements,” he said.