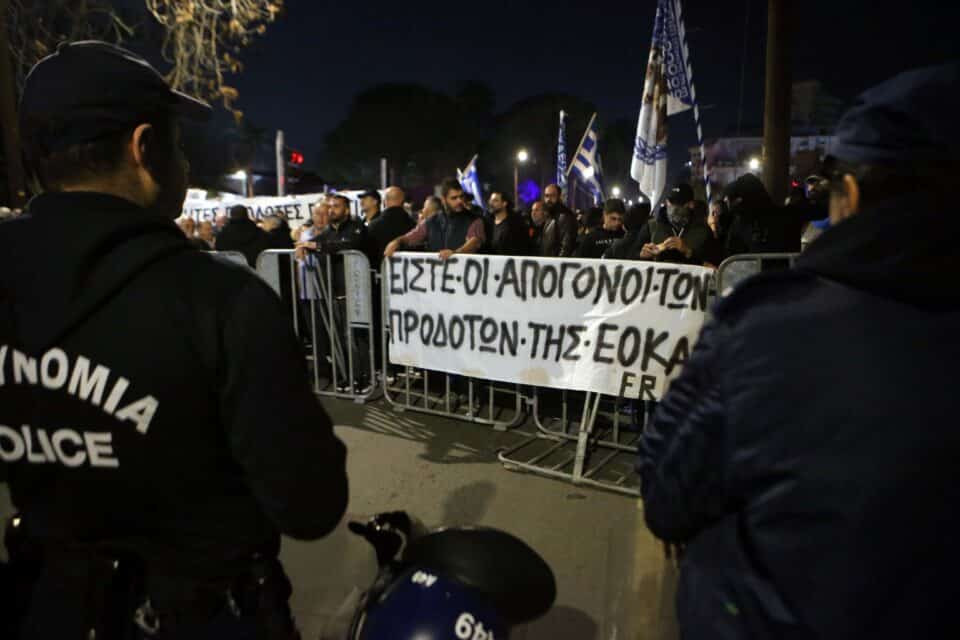 Parties and presidential candidates as well as the government on Friday widely condemned violent break outs at the Grivas rally during the state budget vote, with some calling the damage to the opposition offices a pre-meditated attack.

Commenting on the incidents, junior opposition Edek’s spokeswoman Maria Panayiotou said that the attack on their offices by about 20 rally attendees was pre-meditated, as the individuals had gone to there armed with rocks and flares.

“Our offices were the target of thuggish actions,” she told CyBC radio, when commenting about the rocks and flares thrown by the Grivsas supporters on Thursday night.

She added that the group were seen leaving the rally and heading towards the Edek offices, where the CCTV caught footage of them attack the party offices.

On Thursday, while MPs were voting, supporters of Grivas protested outside.

Police closed the road outside and set up barricades around the parliament building, keeping a close eye on Grivas supporters who chanted slogans – ‘Cyprus is Greek’, ‘Grivas is with us and guides us’, and ‘Anarchists and Bolsheviks, this land is not yours’.

A controversial figure in Cypriot history, Grivas – nicknamed ‘Digenis’ – was the leader of Eoka, a Greek Cypriot nationalist paramilitary organisation that fought a campaign for the end of British rule in Cyprus, and for eventual union with Greece.

In further comments about the rally that marred the political debate on Thursday, main opposition Akel on Friday said: “The slogan ‘Eoka B’ strikes again’ that was heard yesterday by the fans of Grivas is a direct insult and threat to the Republic and all Cypriot people.”

They added that at the core of the statement is the fascist violence, which led to the violence of the treacherous 1974 coup.

“And those who, instead of condemning the rise of fascism, speak of ‘historical accuracy’ and ‘artificial polarisation by the parties’ are making a vulgar compensation that simply facilitates the extreme right,” the party said in the their statement.

It was the decision of the Disy government they said with Elam at their side that the funds for the ‘Grivas Museum’ were allocated.

“And it is this decision that paved the way for the far-right to shout slogans in favour of the fascist organisation and its leader outside the House of Representatives,” the party said.

Meanwhile, in their comments about the violence and slurs, ruling Disy condemned protesters actions.

“The Democratic Rally unequivocally condemns the extreme behaviour that took place outside the parliament yesterday, vandalism to parties and verbal attacks against democratically elected members of parliament,” they said.

The party said that people should not fall back on divisions of previous decades.

Centre parties that supported allocating the funds and presidential candidates also decried the violence and slurs shouted at MPs.

Junior opposition Diko in their statement said: “The turn the protest took is unacceptable and irresponsible. Such behaviours are directed against democracy itself and blatantly insult Cypriot society. Any form of violence is condemnable and should not be tolerated by anyone.”

They condemned the attacks on Edek and said that the mob also attempted to attack their offices but failed.

Depa party also condemned the incidents, saying that it caused disappointment and shock.

“Verbal assaults, destruction of public property, targetting and insulting members of parliament, representatives of the Cypriot people, are reprehensible, unacceptable actions and have no place in any modern democracy,” they said.

Presidential candidates Nikos Christodoulides, whose main supporters Diko passed the funds during Thursday’s session, and Andreas Mavroyiannis also condemned the attacks on the Edek offices and the insults hurled at MPs.

In his post on social media, Anastasiades said: “From Spain where I am for the EUMED9 summit; I in the most intense manner, condemn the unacceptable incidents that occurred earlier today.”

He added that these extreme actions are neither acceptable, nor do they contribute to unity and solidarity needed in a country under occupation.

At the Edek offices, the glass front was smashed, and a flare or Molotov cocktail – it was unclear which – tossed inside. A small fire broke out, which was extinguished minutes later.

The incident – treated as malicious destruction of property and attempted arson – was reported to the police around 6.30pm.

Back in parliament, while debating the budget, Greens MP Alexandra Attalides said the crowd had hurled insults at her.

In their statement on Friday, the Greens, who supported the proposal to cut the funding, condemned the attacks.

They called for the perpetrators to be caught and punished.

“At the same time, we call on the political powers to embrace one common decision, to deal with racism, hate speech, and fascism,” they said.