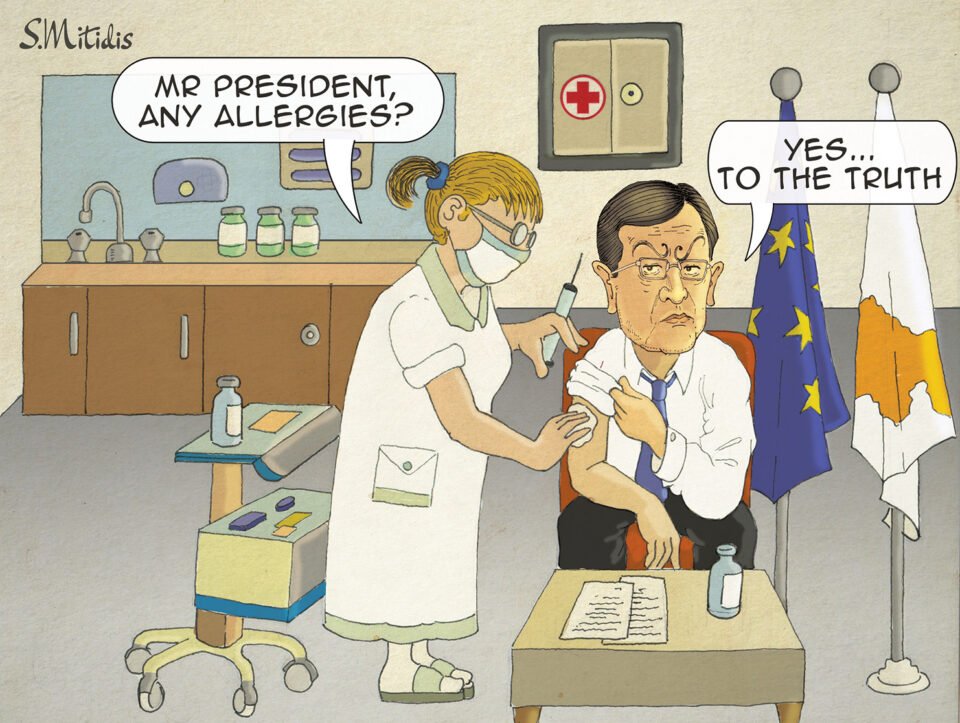 ANNOUNCING the government’s decision to step up the violations of the rights of the citizens of the Cyprus Republic, the generalissimo and spokesman of our evolving authoritarian state Health Minister Constantinos Ioannou made the following staggering admission.

“Unfortunately, from the result it transpires that all the previous measures were not effective to the desired degree, for many reasons, despite the fact that for months now a superhuman effort, night and day, under very difficult conditions, is being made.”

And because all the previous measures did not work the government has decided to lock us all up in our houses, which we could leave for an hour or two a day, once we have received permission via SMS as long as we go out for one of the seven reasons specified by the government. The eighth reason is one that “can be justified on the basis of the restrictions,” whatever that means.

Needless to say there will be cops on the streets of the evolving police state to check that anyone walking in order get some fresh air will be fined, as this is not one of the seven reasons for which permission would be granted to leave the house.

If you want some fresh air open the windows of your house, which is still permitted as long as you wear your face mask, when they are open. And if you decide to jump, send an SMS first for permission, because it is a reason that “can be justified on the basis of the restrictions.”

Because our government, despite the superhuman effort it was making to control the spread of the virus, appeared to have not carried out checks on old people’s homes to ensure full compliance with the health protocols in places housing the most vulnerable members of our society – the elderly. The result was that dozens of elderly citizens were infected and passed away.

The authorities were too busy booking people not wearing a face mask while walking in the streets to have time to check what was happening in care homes. And none of the ubiquitous epidemiologists that are on TV and radio every day, spreading alarm among the public, thought of advising the government to carry out regular checks of care homes where the really vulnerable lived.

But they made us wear face masks in the open air, insisting that this would stop the spread of the virus. Well, we obeyed, but as Ioannou conceded, neither this nor the other measures were effective to the desired degree. Having consistently got things wrong why is the government still listening to the team of scientific advisors?

THERE was some disagreement in the cabinet over the extent of the lockdown, but Ioannou insisted that it should be complete, regardless of the devastating effects it would have on the economy and people’s incomes because this was what the omniscient epidemiologists had strongly advised.

Considering that the only thing the epidemiologists have done successfully is scaring the living daylights out of people with their doom and gloom predictions, was it such a good idea to listen to their advice about a lockdown that causes businesses to go bankrupt, thousands to lose their jobs and others to survive on state handouts? As for the state, it will be forced to cut spending on development and see the public debt continue on its upward path.

The decision for the lockdown was taken by people who will not see their income and standard of living affected in the slightest by it – ministers, civil servants and epidemiologists all of whom will carry on receiving their monthly pay in full. Who cares about the hapless waiters, shop assistants and office clerks that can look forward to receiving a percentage of their lowly pay or the owners of small businesses that live hand to mouth?

On Saturday the government announced its support scheme for businesses which added insult to injury. A business that lost 240K of its revenue, for example, will receive 8K in support, which amounts to three per cent.

THE BENEFICIARIES of the lockdown are the members of the labour aristocracy, the parasitic classes of the public sector and semi-governmental organisations who will be on a month’s unwritten holiday on full pay. The government decided the public parasites should not work from home, because not working at the office could cause the spread of the virus.

The other members of the parasitic classes, the secondary school teachers, felt they were being discriminated against because they would not be allowed to give online classes from home. The education ministry insisted teachers should go into school and deliver online lessons from their classes, prompting the obligatory moaning by union bosses.

Were teachers more resistant to the virus than other public employees and required no protection asked one self-pitying teacher who was close to tears, because he had to go to school. On Friday, a union boss found another reason to moan – it was freezing cold in the classroom in which he had to teach. It was 22 degrees during the day on Friday.

THE CAPTAIN of a sinking ship is always the last to leave, making sure everyone is on the rescue boats first. Similarly, in a crisis situation the leader of the group will always be last to seek help. This conventional leadership practice was not evident here when the first vaccines arrived.

The first person to be vaccinated was none other than our leader, Prez Nik, who also invited the camera crews to film this illustration of unconventional leadership. Of course, the wily Nik had thought up a clever narrative for putting himself at the front of the vaccination queue.

He was courageously showing people that had expressed fears about being vaccinated that there was nothing to be afraid of. The leader was putting himself on the frontline for the sake of his people, was the ludicrous narrative.

Was he doing this for the benefit of a few hundred anti-vaccine nutcases that think the vaccine is part of a Bill Gates plot to take over control of their mind? Did he not know that 99.9 per cent of the population would be prepared to give up a kidney to be at the front of the vaccination queue? This has been proved in the last few days by reports of ineligible people getting vaccinated and a host of organised groups demanding their members were given priority.

Nik, being the prez, could have been vaccinated first privately; he really did not have to stage this laughable theatre claiming he was doing it for our sake, to reassure us that we had nothing to fear.

PREZ NIK had been put in a bit of a spot by his friend Archbishop Chrys, who revealed in an interview with Politis a few weeks ago that the prez had on more than one occasion expressed a preference for a two-state solution in conversations they had.

Nik got his spokesman to say that Chrys had misunderstood what he had told him and that he had never supported a two-state solution. He was asked again about the settlement that dare not speak its name among Greek Cypriots in an interview with Phil on January 1 and he came up with the most brilliant answer.

“The whole picture that I supposedly supported something other than the bizonal bicommunal federation was created by the narratives, that on the main, were being leaked by Mr (Espen Barth) Eide after the collapse of Crans Montana.” Eide was the hapless Special Envoy of the UNSG whom Nik had accused of being pro-Turkish and of being a big liar. Where Eide met the Archbishop to tell him that Nik supported two states we were not told.

Phil then asked if Eide had alleged Nik supported two states, to which the Prez, in a fit of honesty, said: “No, I am just explaining how the mythology that led to the allegation of two states was created.”

As Sir Walter Scott said, when Eide told him about the two-state mythology, “Oh what a tangled web we weave, when first we practice to deceive.”

LAST Sunday in Kathimerini former Finance Minister Harris Georgiades wrote an article that came across as support for the mythology of the two-state solution without him actually mentioning it by name. Instead, Harris argued that federation was no longer attainable, without going into any specifics, such as informing his readers what he believed was an attainable settlement.

Was he pandering to Nik? One skettos drinker speculated that he was lobbying for the position of Nik’s successor, given that presidential elections are only two years away. A glykis drinker claimed the foreign minister was on the way out – Nik had reportedly had enough of the royal couple – and Harris was rehearsing for the post, which he had hoped to be given after Nik’s re-election but was edged out by the scheming Paphite.

Returning to the article, Harris made the following assertion: “It is time for a new realism… We must take difficult decisions and once again speak the language of truth.” Given that the old realism failed, what guarantee is there that the new realism will achieve any result?

On jumping the vaccine queue and the need for positive news

Our View: SMS permission system violation of our liberties