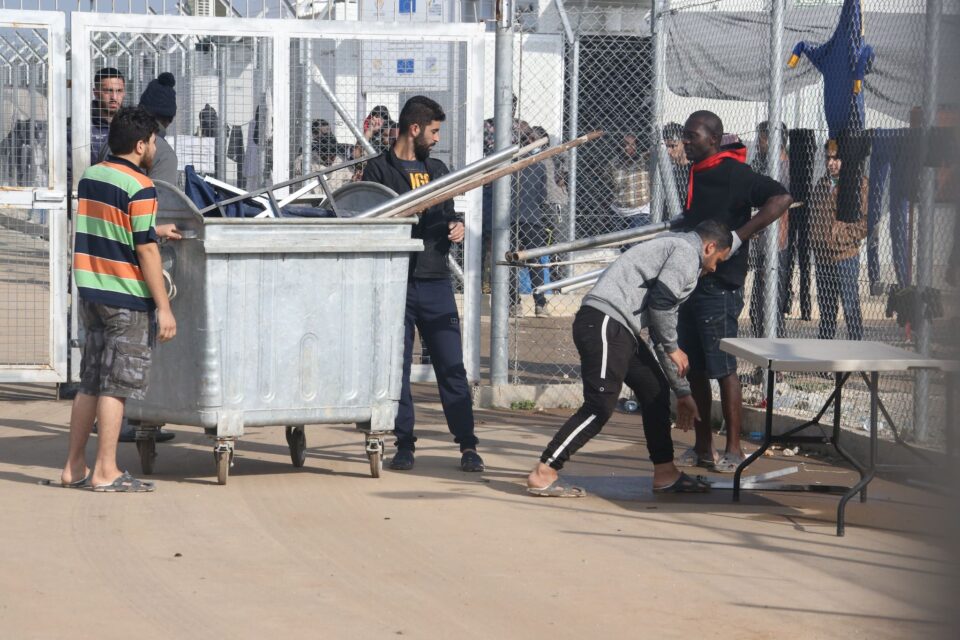 THE interior ministry on Tuesday condemned clashes between more than 600 migrants on Monday night at the overcrowded Pournara reception centre outside the capital, which left 35 people injured and caused considerable damage to the facility.

This incident highlighted the serious problem Cyprus is facing as regards the mass arrivals of irregular migrants, according to Interior Minister Nicos Nouris who said what was happening was “no longer a refugee issue”.

The trouble started shortly after 11pm Monday after an internal barrier was breached and migrants from Syria and African countries clashed. No information was given as to the reason for the fight.

According to a police spokesman, some of the migrants threw stones and were armed with iron bars. Police intervened and managed to break up the fight after calling in reinforcements. Several cars were damaged, some belonging to police and some to other services.

Police said 35 people were slightly injured, 24 of whom were taken to Nicosia general hospital for first aid treatment.

The interior ministry said on Tuesday that in cooperation with the police, it was going through the footage of the closed-circuit surveillance system to investigate what caused the clashes.

Authorities said the centre was currently hosting around 1,500 migrants while it has a capacity for only 1,000.

Nouris said this was not the first time clashes took place between Syrians and other nationalities and that is why authorities had taken measures to keep them in sperate quarters.

Speaking to state broadcaster CyBC, he said Cyprus was not in a position to receive more irregular migrants. He pointed out that last year there were around 400 people in Pournara and 500 at the Kofinou reception centre for asylum seekers while today there are more than 1,500 in Kokkinotrimithia while Kofinou had reached full capacity. Another reception facility was under construction in Limnes area in Menoyia, he said, pointing out however that Cyprus does not intend on becoming a centre for migrants.

The minister said there have been arrivals of Syrians and African irregular migrants during the past six weeks, mainly from Turkey with the majority of them being single men aged between 25 to 40. “We are very concerned by this,” he said.

Nouris said authorities of the Republic were doing what they can to prevent these arrivals but Turkey and the Turkish Cypriot side, “not only they do not help, but they make sure to create routes of illegal entry” to the government-controlled areas, he said. He added that the government tries to stop arrivals by monitoring some spots along the buffer zone, but people smugglers find other gaps.

“This country can no longer receive more irregular migrants, this is no longer a refugee issue,” Nouris said. The minister also said that migrants arrive in Cyprus believing they can travel from there to the rest of Europe ignoring the reality that Cyprus is not a Schengen member and they cannot travel freely to other EU countries.

He added that Turkey was receiving a lot of money from the EU to keep migrants there and said Cyprus wants the EU to make arrangements to return Syrians arriving through irregular routes back to Turkey.

The interior ministry said later in the day that Pournara was operating “in state of emergency conditions.”

It added that the large numbers of people, in connection with the exit ban from the centre due to the pandemic, created additional problems but that “there is no justification for the incidents that broke out between Syrians and Africans, which caused injuries among the migrants, but also great damage to the centre.”

It added that despite the challenges due to the pandemic and the continuous migrant flows, all its services “make superhuman efforts every day to manage the continuing illegal arrivals of migrants, mainly from the ceasefire line, coming from Turkey.”

In the meantime, more irregular migrants arrived during the night on Monday.

An inflatable boat with 21 young men on board coming from the Turkish coast approached Pyrgos at around 11pm.

Police stopped the vessel and towed it to the fishing shelter of Kato Pyrgos shortly before 2am.

Two of the men, aged 48 and 38, believed to be traffickers were arrested while the other 19 were to be transferred to a reception facility.

The incident at Pournara prompted opposition parties Akel and Edek to call for improvement in the living conditions at the reception centres.

Akel said that the living conditions, along with the large number of refugees in Pournara, were the causes of these incidents. It added that people who are staying in tents cannot withstand the cold, especially at night and they do not have blankets or heaters to keep warm despite the efforts of NGOs to meet these needs as the state is not ready to provide them. “There are constant complaints about the lack of food, the lack of a sufficient number of sanitary facilities such as toilets, bathrooms without hot water, thus exacerbating the inhumane conditions that lead to desperate situations,” the party said.

Nouris refuted claims that migrants were living in inhumane conditions.

He said that through he understands these people were frustrated because they cannot leave the centre due to the pandemic, such incidents were not justified. On the contrary, he said, the damage caused to the facilities, estimated at thousands of euros, “makes their stay there more difficult.”

The party said that Cyprus’ geographical location and its national problem require that the country be “doubly careful and strict towards those who exploit human suffering in order to alter its demographic and social structure.”