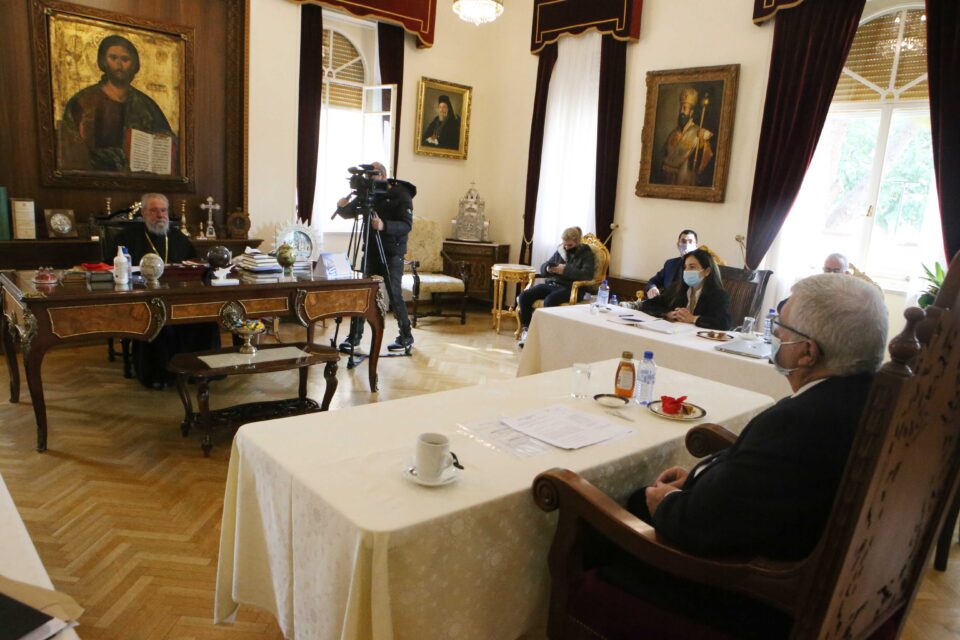 The Archbishop speaking before the panel on Tuesday (photo Christos Theodorides)

Archbishop Chrysostomos said on Tuesday he met briefly and only once with Jho Low, a Malaysian national granted Cypriot citizenship in 2015, but that he was unaware at the time that Low was under investigation for financial crimes.

“I met Mr Low. He wanted to make a donation but I initially declined. He insisted,” the prelate testified before a panel investigating Cyprus’ now-defunct citizenship-by-investment (CBI) scheme.

“I met him over a meal at the Archbishopric. I thanked him for the donation and said it would go to the Theological School. Later I learned that the amount was €300,000.”

Chrysostomos said that around that timeframe he sent a letter to then Interior Minister Socratis Hasikos, asking him to give Low special consideration as a candidate for Cypriot citizenship.

But, he added, Low was issued a passport by the time the minister read his letter.

Low is an international fugitive sought by authorities in Malaysia, Singapore and the United States in connection with the 1MDB scandal.

He applied and obtained a Cypriot passport in late 2015 via the CBI. Although under investigation at the time, he was not officially a wanted man until October 2016 when Interpol published a red notice on him. After the Malaysian elections in 2018, the new government there reopened an investigation and issued arrest warrants against him.

When questioned as to how he happened to become involved in the Low affair, Chrysostomos said it was because the villa purchased by the Malaysian as an investment had been built on Church land.

As the developer did not have the money for the title deed, he signed as a guarantor for the Archbishopric himself.

The land developer who sold the villa to Low asked Chrysostomos to send a note to the interior minister in a bid to expedite the Malaysian’s case for a passport.

“If the passport came out quickly, we would also get our money,” Chrysostomos said.

Asked if he knew the investors, the prelate said he knew only Low. He received only one cheque from the Malaysian, issued by a company Low owned and which was registered in Cyprus.

The chief cleric said he never looked into Low’s background: “No I couldn’t. I had no authority to request information from state agencies. That was someone else’s job, the minister’s.”

He subsequently heard from the media about Low’s entanglements with the law.

“It was then that I learned that he had received a [Cypriot] passport. What I had done, is send one letter, and that was it.”

Asked if he had been aware of the European Union’s concerns over Cyprus’ investment programme, Chrysostomos said no.

“I don’t think that Brussels would not check. I received [from Low] a Bank of Cyprus cheque. It’s not like I got the money in bags. The cheque was checked by Brussels.”

Responding to another question, Chrysostomoss could not recall how much the Church land in question was sold for – “I am not a computer” – but then added that it was “for a few thousand euro.”

Investigative panel member Demetra Kalogirou then stepped in to state for the record that the amount was €500,000.

Likewise the top priest did not remember when the land was transferred: “I don’t go to the land registry office. An employee does.”

The Archbishop expressed puzzlement as to why the panel was coming to him with questions.

Earlier, Hasikos had testified to the same panel that he had received a letter from Chrysostomos regarding Low, but insisted this did not constitute interference.

The committee of inquiry’s proceedings continue on Thursday with the testimonies of the head of the Bar Association Christos Clerides and the director of Icpac (Institute of Certified Public Accountants of Cyprus) Kyriacos Iordanous.

Next week the panel will hear from President Nicos Anastasiades, after which the committee will be issuing an interim report.

The government was forced to nix the passport scheme last October in the wake of a damning undercover report produced by the al Jazeera network.

Djokovic is our LeBron but we have to call him out sometimes, says Kyrgios