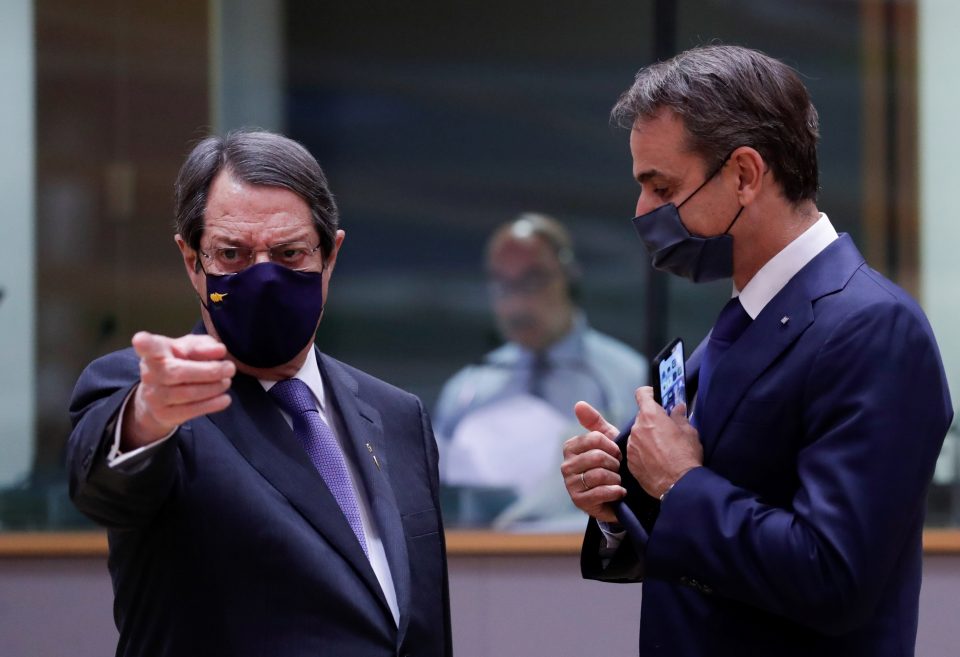 Greek Prime Minister Kyriakos Mitsotakis is expected to visit Cyprus within the coming days for consultations with President Nicos Anastasiades ahead of the informal five-party summit to be convened by the UN secretary-general (UNSG) in early March, it was announced on Monday.

Anastasiades and Mitsotakis discussed the Cyprus problem on Monday during a telephone conversation.

According to government spokesman Kyriacos Koushos, the two leaders discussed developments in the Cyprus issue, after the expressed intention of the UNSG to convene an informal conference on Cyprus in the near future.

During their conversation, Anastasiades and Mitsotakis “found common ground on the principled issues as well as the desired basis for the solution to the Cyprus problem”.

Greece, along with Turkey and the UK, the guarantor powers, will be represented at the five-party summit, along with the island’s two community leaders.

Turkish Foreign Minister Mevlut Cavusoglu arrived in the north on Monday afternoon for a series of contacts ahead of the summit. He is to meet Turkish Cypriot leader Ersin Tatar on Tuesday.

The five-party summit is expected to take place in March but there has not been any definite decision on the place due to the pandemic. Though it was initially announced the summit would take place in Greentree, in New York, reports said that due to the surge in cases there, the UN are also considering a European location.

The pace of diplomatic activity is picking up ahead of the informal conference with the arrival of British Foreign Secretary Dominic Raab on Thursday. Raab is to meet with both Anastasiades and Tatar.

A visit by the EU’s High Representative Josep Borrell is also on the cards before the conference, though no date has been fixed.

The EU has already said it would not countenance two states in Cyprus, which is what the Turkish side has been touting, while the Greek Cypriot side says it wants to stick to the decades-old agreed formula for a bizonal, bicommunal federation (BBF).

Observers have begun to say it could possibly be something in between – a loose federation as spoken of previously by Anastasiades with a single international identity, although the president said on Friday, he would not consent to anything other than a BBF.

The position of the UN Security Council, that reaffirmed last week the UN’s commitment to a BBF in its resolution on the renewal of the Unficyp mandate for another six months, did not please the Turkish side.

On Sunday, the Turkish foreign ministry said it was unacceptable for the council to “prejudge the solution to be decided by both sides”.

It added that the aim of the informal 5 + 1 meeting was to determine whether there was common ground or not for the solution and where the parties “are expected to honestly reveal their visions regarding the future”.

“It would be beneficial for the Security Council, instead of imposing on the parties a process that does not produce a solution, which has been tested and exhausted, to secure the ground that will allow the discussion of new ideas that will make the solution possible,” the statement added.

Tatar too, said he would continue to promote “a constructive compromise with two states based on cooperation and sovereign equality”.

The EU also weighed in on Sunday with Commission Vice President Margaritis Schinas, who, in an interview with Kathimerini said “those who talk about two countries in Cyprus have not asked the EU”.

In the meantime, former Turkish Cypriot leader Mustafa Akinci warned against pursuing a two-state solution at the 5+1 conference on Cyprus.

On Sunday, Akinci had recalled what happened the last time the Turkish side had tried to table such a move at the negotiations in 2004.

“Under the influence of the late [Rauf] Denktash, by 2004, Turkish officials had also brought to the fore the issue of a two-state confederation,” Akinci said. He added that himself in the years prior to 2004, had warned that the result of that policy would not end in recognition of the ‘TRNC’.

He had warned that pursuing that policy would only result in the entry of “southern Cyprus” to the EU with the name of the whole of Cyprus in terms of international law. “Unfortunately, this happened,” said Akinci.

Akinci said that if the goal now is to accept two recognised states with a separate international identity, “this will not be possible to achieve at the five-party conference,” he warned.

“If all sides play with time and it is said [at the end of the conference] that no common ground was found then it is clear where all this will end: Yes, there will be two states, but on the one hand it will be the Republic of Cyprus and on the other hand the Republic of Turkey,” he added in an allusion to annexation of the north by Ankara.

Apollon clear at the top after win over Apoel