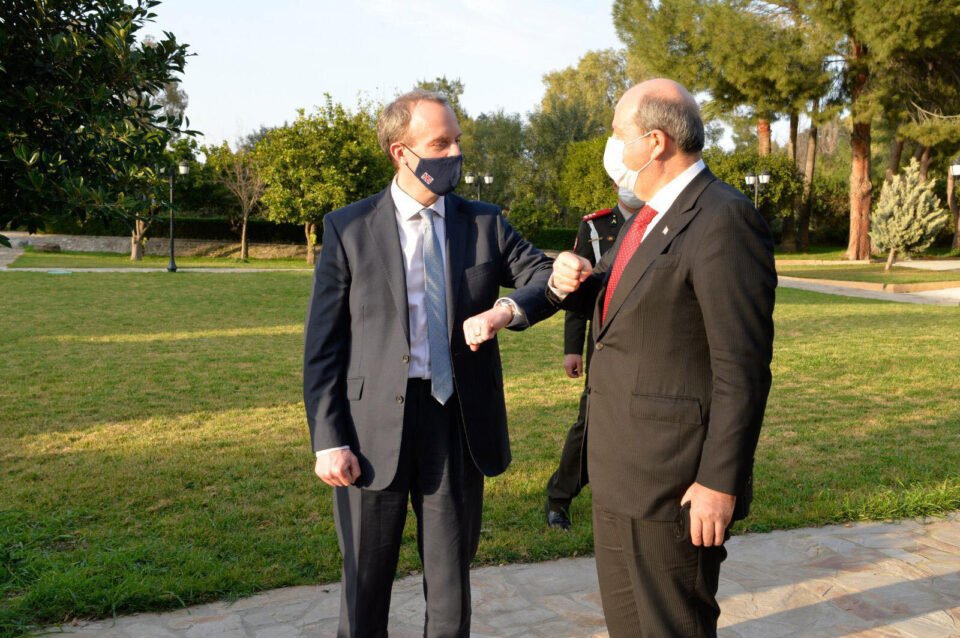 Turkish Cypriot leader Ersin Tatar on Thursday conveyed to the British government that his side will be going into the five-way summit on Cyprus with a two-state mindset, an arrangement he called “realistic” and “fair.”

Tatar met with British Foreign Secretary Dominic Raab, who crossed over to the north after earlier meeting with the Greek Cypriot leadership.

Raab’s visit comes ahead of a 5+1 summit on Cyprus scheduled for March, and in which the UK will participate as one of the island’s guarantor powers.

Speaking to the media, Tatar said he explained to Raab that at the March conference he will present his vision for “a fair, realistic and viable solution” attained through a two-state partnership where the constituent states are equally sovereign and enjoy equal international status.

The Turkish Cypriot leader said he looked forward to a “win-win” deal contributing to regional stability.

He gave an account to the UK official about “missed opportunities” in Cyprus, and the “injustices” perpetrated on Turkish Cypriots whom he called one of the two “founding nations” of the Republic of Cyprus established in 1960.

Asked whether Raab had indicated where his government leans on the Cyprus issue, Tatar said only that “Britain is exploring these matters.

“He [Raab] and his team are studying the issue at great length. Besides, they are a guarantor power, they too have responsibilities.”

On Brexit, Tatar said it can create prospects for the north’s relations with Britain, such as direct trade and direct flights.

The Turkish Cypriot leader also pointed out to Raab that the north expects its “share” of the doses of AstraZeneca’s Covid-19 vaccine expected to be delivered to the Republic this month.

He pointed out to Raab that the approximately 10,000 British nationals living in the north are wanting to be inoculated.

Turkish minister accuses US of being behind 2016 coup attempt, State Department denies