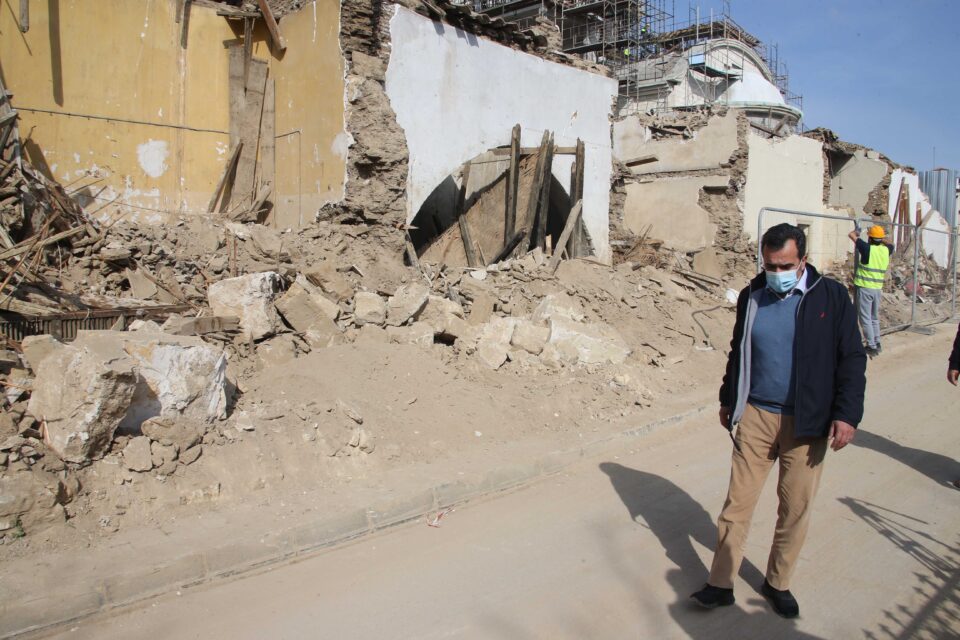 Nicosia mayor Constantinos Yiorkadjis at the scene on Tuesday

Akel’s Nicosia municipal councillors on Friday slammed a postponement the previous evening about how to handle the demolition of houses in the centre of Nicosia by the Archbishopric.

It said the mayor and Disy appear not to be in touch with the public’s feelings and are arranging for an agreement with the archbishop, without the implementation of the law that provides for the immediate revocation of the permit and the restoration of the listed buildings.

“Our municipal councillors disagreed with the proposal of the Disy group for a postponement,” Akel said.

Against a general backdrop of outrage, Nicosia Municipal Council will make a fresh attempt on Saturday to decide how to move forward after the demolition of the listed houses – initially thought to be four in number, but now said to be three – near where a new cathedral is under construction.

The council met urgently to discuss the issue on Thursday night, but no decision was taken with Mayor Constantinos Yiorkadjis telling CyBC on Friday morning that two options were under discussion – imposing a fine or suspending the permit of the cathedral.

The surprise, and illegal, demolition has prompted outrage among public opinion. Political parties have condemned the destruction of the island’s cultural heritage, the interior ministry and the municipality insist the houses must be rebuilt while the attorney general has asked to be kept informed about developments.

Archbishop Chrysostomos meanwhile has written to the municipality pledging to restore the houses and denying he ordered them bulldozed, saying only that the area was being cleared up after one of houses collapsed because of the weekend storms.

Yiorkadjis said that Thursday’s discussion at the council had been lengthy, at two to three hours, because the issue was extremely serious.

All municipal councillors want the listed buildings restored, he said. Proposals were made by the municipality and by councillors and a decision will be taken on Saturday, giving time to members of the council to study them.

The mayor added that the technical services of the municipality and the archbishopric were also in contact.

He would not elaborate on the details of the discussion but said there were two approaches – the first was to use the town planning law that provides for a fine for the violation, and the second to suspend the cathedral’s town planning permit.

Akel said it had submitted a proposal for the immediate implementation of the law – which provides for a revocation of the permit, a decree suspending work on the cathedral and immediate restoration of the listed buildings which are in danger of collapsing altogether.

Akel said municipal councillors had also asked that all legal procedures be launched against those who broke the law.

And it said that the archbishopric was reoffending, having also demolished another listed building, the mansion of Evgenia Theodotou on Asklipios Street in December 2018, for which so far nothing has been done.

The president of the Technical Chamber Constantinos Constanti echoed this disappointment, saying the municipal council’s actions would only strengthen public mistrust.

The municipal council has missed an opportunity to win public confidence, Constanti said, adding that the law should have been implemented from the beginning. Work on the cathedral should be suspended and the listed building restored, otherwise a dangerous precedent was being set, he added.

300 trucks of waste removed in Paphos

QiGong for mind, body and spirit