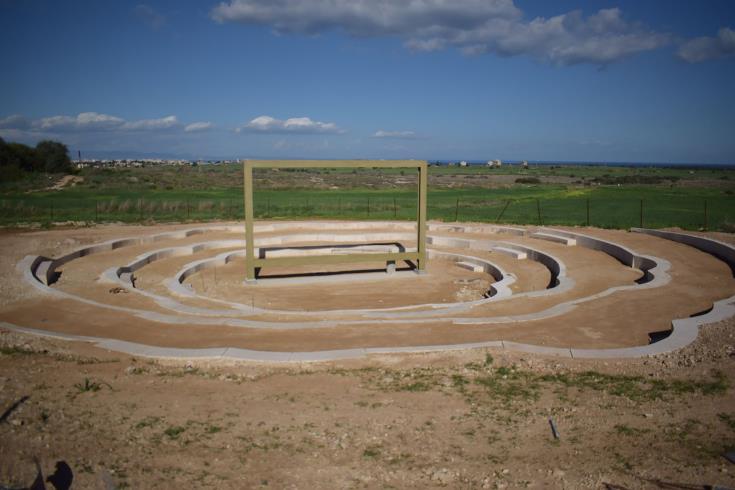 An open-air cinema is due to open inside the buffer zone in Dherynia this spring, mayor Andros Karayiannis said.

Designed by internationally known artist and filmmaker Rosa Barba, the project has been realised by Dherynia municipality in collaboration with the Italian embassy, Point centre for contemporary art, and the United Nations.

Called “Evoking an Architecture of Passage,” it will consist of two parts: a film and a long-term open-air cinema installation. The film has been shot in Cyprus, specifically at the Mazotos shipwreck and a number of archaeological sites and will have its inaugural screening this spring.

The project secured first prize at the Italian council’s international competition in 2018 and received a grant from DGAAP (Directorate General for Contemporary Art and Architecture and Urban Peripheries) in Italy.

The cinema incorporates amphitheatrical seats sculpted into the earth and a permeable screen on which a film can be watched from both sides. Efforts were made to use materials found on site in order to incorporate it with the area’s natural landscape and environment. Only the screen supporting structure and drainage system have been imported.

The artist expressed great interest in exploring the archaeology of Cyprus, as well as the buffer zone, the mayor said. With the area’s conflict-ridden past in mind, Barba envisioned a space where the Greek and Turkish Cypriot communities can coexist, expressing solidarity and openness. The installation is meant to represent a meeting point for all communities on the island.

This is not the first of Dherynia municipality’s initiatives to promote bicommunal interaction, Karayiannis said. “We had began constructing futsal courts next to the checkpoint on Famagusta avenue, but it all had to pause after coronavirus measures mandated the closure of checkpoints”.  He added that the courts will be completed once measures are lifted.

After the completion of the open-air cinema, Dherynia will boast three notable projects related to promoting reconciliation and contact between the Greek and Turkish Cypriot communities. The other two are the futsal courts and intercommunal centre “the Garage”.

Anastasiades to travel to Israel on Sunday

Does the world need new vaccines?