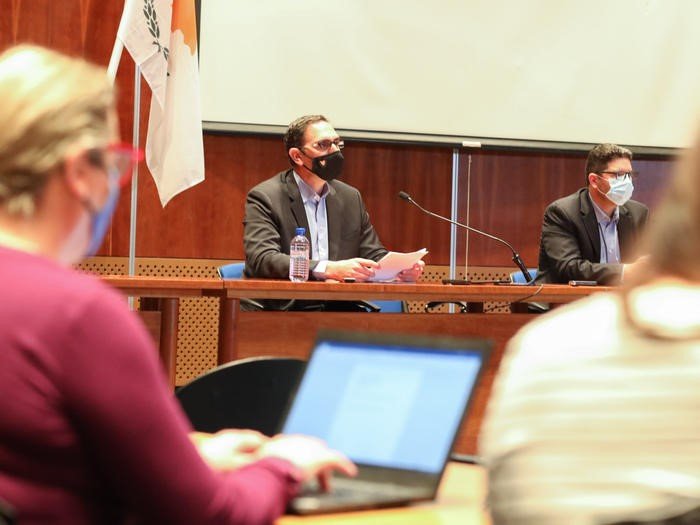 Up to Thursday, 41,673 people have been vaccinated, of whom more than 14,000 receiving both doses, Health Minister Constantinos Ioannou said on Friday.

Speaking at a press briefing, Ioannou said that 14,105 have received both doses within the one month and a half since the start of the vaccinations in Cyprus.

The minister said that they expect to vaccinate almost 240,000 people by the end of March. “This means we might cover all vulnerable groups, even people over 65.” Herd immunity could be achieved by the end of June, since, if everything goes according to plan, it is expected that around 500,000 people will be vaccinated by then.

Ioannou also referred to the debate on the efficacy of the AstraZeneca vaccine and whether it should be administered to people over 65. He said that the government’s decision to carry on with the vaccination without age restrictions was based on decisions of the European Medicines Agency (EMA).

He added that 27 scientists representing the EU member states, participating in EMA, after studying the evidence before them, decided that the AstraZeneca vaccine will be given to people aged 18 and over without age restrictions. This position, he said, was strengthened on Wednesday by the recommendations of the World Health Organisation, which assessed it as safe for people over 65 years of age.

“The effectiveness of the AstraZeneca vaccine not only has it not been challenged by any official authority in any country, but on the contrary it is given to millions of elderly people in the UK, where there is a sharp decline in patients,” Ioannou said. This, he said “confirms our choice to vaccinate the elderly first, protecting from serious illness and / or death.”

He said he understands the confusion caused by the strategy of other countries to lay down age restrictions on the administration of the AstraZeneca vaccine. “Some countries have set the age limit of 55, others 65 and others 70 and others follow the indications of EMA,” he said.

The differentiation and disparity observed in the decisions on age limits, he said, confirm the fact that countries have relied not only on scientific data but on a number of other factors such as the vaccination programme and availability of vaccines, depending on each country’s strategy. “Cyprus’ strategy, I repeat, has been and is from the beginning to save lives,” Ioannou said.

The minister called for an end to unnecessary debates on the use of the vaccines, arguing that vaccinating people in high-risk groups was protecting them from serious illness, even death.

He warned that people who wait to be inoculated with another vaccine, would mean delaying their vaccination coverage. “We should all keep in mind that there is no room for rejection of one vaccine over another,” he said.

“The risk of delaying vaccination outnumbers the benefits, especially for older ages, since a possible infection during the time one will wait for the vaccine of their choice, endangers their safety and health.”

He explained that Pfizer and Moderna’s scheduled vaccine deliveries for the coming weeks were in small quantities meaning that it would not be possible to immediately meet the needs of all interested in being vaccinated with these two instead of that of AstraZeneca.  In other words, he says people should not be holding out for the Pfizer and Moderna jabs and delaying the whole process.

Regarding the vulnerable groups of the population, Ioannou said that they were being vaccinated in parallel with the vaccination of the elderly.  “It is not easy to evaluate these groups but now we have set up a committee with the participation of organised patients and we expect that week by week, in parallel with the rest of the programme, these groups will be included,” Ioannou said.

The government has also ordered 250,000 doses of CureVac, whose vaccine, CVnCoV, is under rolling review by the EMA.

As regards the Russian Sputnik-V vaccine, deputy head of the state pharmaceutical services, Elena Panayiotou, said that the company has shown interest in having it licenced by the EMA but has not applied yet.

Panayiotou also said that so far 72 people in Cyprus reported side effects from the vaccine concerning very mild symptoms such as pain at the injection site and shivers. These side effects are among those mentioned in the companies’ leaflets, and are symptoms observed after the administration of all vaccines, she said.

“We have not had any side effects leading to hospitalisation and this is true for other countries that give vaccines and monitor the situation as we do,” Panayiotou said.