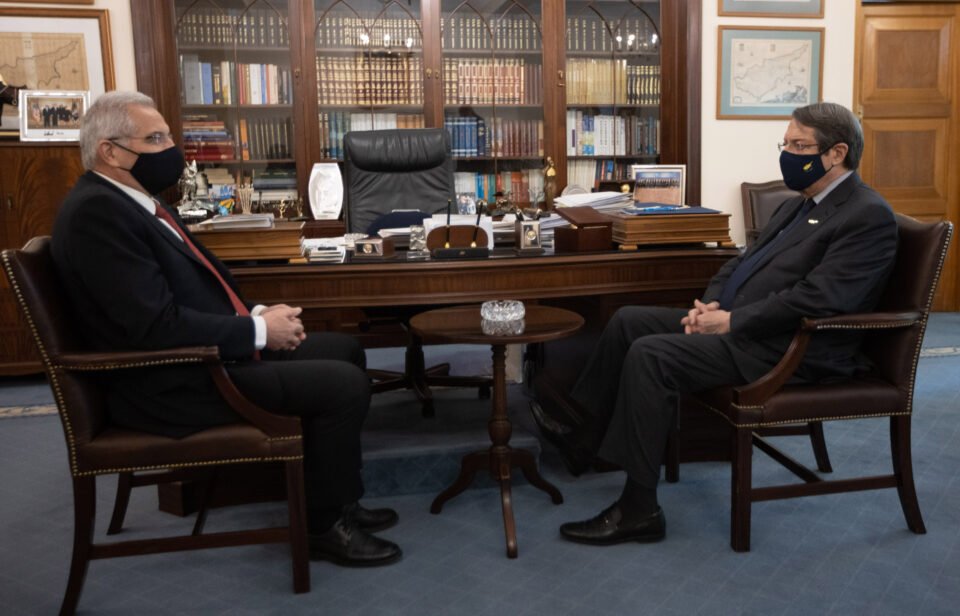 The government “completely respects” civil liberties, President Nicos Anastasiades said but if the epidemiological picture worsens it will be the fault of decree-breakers such as those who participated in last Saturday’s protest after which police were accused of using excessive force.

The government’s overriding priority lies in safeguarding public health amid the coronavirus pandemic, Anastasiades said. This formed the central message conveyed during a meeting he had with Andros Kyprianou, leader of main opposition Akel.

A statement on the meeting released later by the government spokesman read: “The president assured Mr Kyprianou that he personally as well as the government completely respect and safeguard civil liberties and human rights, and that the restrictions have been imposed to protect the ultimate good, that being health – something that is being done in all countries regardless of political system or ideology.”

Kyprianou had requested to see the president to discuss the government’s approach and thinking behind the restrictions – including an ongoing blanket ban on mass gatherings – following last Saturday’s incident when police violently broke up a demonstration in Nicosia.

The anti-corruption themed demo was organised by a number of left-wing groups. For the first time police used a water cannon to disperse the crowd, while video footage suggested officers used excessive force against people.

During the meeting with Kyprianou, Anastasiades stressed “that any disregard of the epidemiological situation or a premature easing of the measures will lead to a new flare-up of the pandemic, with unforeseen consequences to everything our people have achieved through sacrifice, where our country is ranked among the most effective in dealing with Covid-19.”

But the president’s message came a sting in the tail: “Responsibility for any worsening of the epidemiological status shall burden those who violate the measures or urge others to violate them.”

The return to “normality,” Anastasiades added, is contingent on bringing the epidemiological situation under control.

The president also signaled that he will convene for next week a gathering of all political party leaders, the minister of health, and members of the scientific advisory team, “to discuss all matters relating to the pandemic and its handling.”

But a prominent lawyer Andreas Angelides said on Thursday that the law authorising the council of ministers to issue decrees, including banning protests for the protection of public health was outdated and must be reconsidered.

His comments came as the head of the government’s scientific coronavirus advisory team was quoted by daily Politis as saying that protests carry no more risk of Covid-19 transmission than other gatherings – provided that protective measures are adhered to.

Constantinos Tsioutis, assistant professor of pathology specialising in infection control at the European University, said the team had been asked by the government on the issue and replied that protests were not considered more dangerous than other places where people can gather, provided people abide by protective measures.

The matter of protests must be decided by the courts, Angelides told the Cyprus News Agency, while noting that the constitution does indeed grant the council of ministers the power to issue decrees.

“These decrees must always be examined on the basis of the constitutional principle but also the principle of proportionality,” he said.

“That is, when you restrict some individual rights, the requirement of the common good must be so great that it balances the deprivation of those rights with the corresponding right not to be deprived of any such right,” he added.

What that crudely boils down to is that some crucial freedoms may be curtailed if the public good is itself under immense threat.

“I have the impression that at some point all these decrees must be examined as to whether they could have some form of improvement, in terms of safeguarding individual rights that are impacted by the decrees, in relation to whether they must be to such a strict degree or to a more limited extent,” he said.

Meanwhile, amid the political fallout from last weekend’s incidents – with law enforcement accused of heavy-handed tactics – the police leadership were mapping out their response to another similar demonstration planned for the coming weekend.

Speaking after a meeting at police HQ, on Thursday, spokesman Christos Andreou said police carved out an operational plan, to be finalised during another meeting scheduled for Friday.

“The police stand ready to discharge their duties and shall be at the location to police the event,” he told reporters.

Asked who would take the lead in coordinating the police response, he said it was the deputy chief of operations.

He said authorities have “information” that agitators might infiltrate the upcoming demo.

On last Saturday’s events – for which the government has ordered an independent fact-finding inquiry – Andreou said police are gathering video and photographs.

“Of course we have seen many photos but also video footage on social media that speaks for itself.”

Asked to clarify what he meant by “speaks for itself,” the spokesman hinted the police have material showing the demonstrators were not entirely peaceful as initially portrayed in the media.

But he also left open the possibility that agitators had deliberately assaulted police officers.

Regarding the water cannon – dubbed ‘Eandas’ in Greek, or Ajax – deployed last weekend, Andreou demurred when asked if it would be used again.

“It’s a crowd control vehicle used by several police forces across the world in such situations. Depending on the situation that unfolds, the necessary decision will be taken.”

Andreou reiterated that police simply doing their job – to enforce the law.

He said that by law, and after giving a crowd a reasonable interval to disperse, police are duty-bound to stamp out a public disturbance.

Police actions last Saturday received almost universal condemnation from the political world as well as from a number of NGOs.

Riot police were positioned around the building’s perimeter in anticipation of trouble.

The crowd of some 50 people chanted slogans in support of the 25-year-old woman injured by the water cannon.

The protesters dispersed after about 10 minutes without incident.