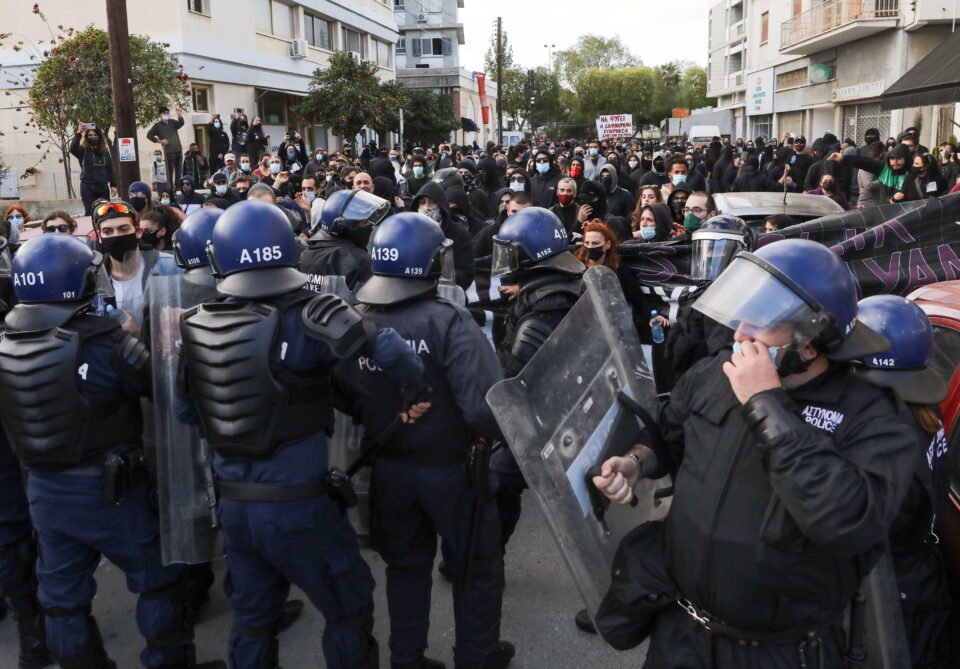 Protesters and activists clash with riot police during a rally against corruption and Covid-19 restriction measures, in Nicosia last Saturday

Two demonstrations are scheduled for Saturday in Nicosia and Limassol, against the backdrop of the heavy-handed police reaction last week and a deeply divided public, which appears to be exploited by political parties ahead of May’s parliamentary elections.

Both protests are a result of the way the police handled last Saturday’s anti-corruption event, which ended with several people injured, one suffering lasting damage in one eye.

An investigation has been ordered into the events of that day, as the numerous organisations that took part vowed to return this Saturday at 4pm, despite the health and safety restrictions in place to stop the spread of the coronavirus.

“February 13 clearly showed that the last thing the authorities are interested in is public health. The attempt to terrorise shall not pass,” the organisers said.

They stressed however, that they are not seeking revenge and they urged those planning to participate to wear their mask and keep their distance from other demonstrators.

The organisers accused the police of irresponsibility after they announced they had information that some individuals would infiltrate the demonstration to create trouble.

“We consider the leak of information on behalf of the police as completely irresponsible … If the police have such information why don’t they investigate them? Is it perhaps convenient for trouble to take place to justify the unjustified events that took place on February 13?”

Officially, the force said they will wait for the probe into the events to finish, though photos and videos uploaded online appear to be damning.

In one, an officer is seen trying to subdue a protester who is on the ground by stepping on his throat while another is trying to nurse a bleeding gash in his head.

But the most serious incident was the injury of a 25-year-old woman who suffered serious eye injury after being hit by high-velocity water jet released by water cannon.

The incident has also divided citizens, with one side suggesting it was bound to happen because she was in the line of fire, while others say she had been targeted by the operator.

There were also those who said she had it coming because she gave police the finger while dancing defiantly in the street in front of the vehicle.

The events of the protest came to add to the problems faced by Justice Minister Emily Yiolitis who sides with the protesters.

“From the pictures I saw, it appears the necessary proportionality is absent,” the minister had said. “However, this will be determined from the procedures in progress.”

Her comments were seen by rank-and-file as an effort to transfer the blame on to them. Reports have suggested ordinary police officers were incensed by the lack of support. Last Monday, many officers serving with the riot unit had returned their gear in protest.

Their union has cried foul over the comments and accused the minister of ignoring other demands they had.

“The justice minister has accused us of doing second jobs a few months ago,” the head of the union Nicos Loizides said. “She said we are corrupt when she presented the budget (in parliament) and that she would create another department of incorruptibles. There are three services. How many will we set up already?”

Loizides lamented that rank-and-file officers were being vilified over Saturday’s events.

“They are trying my colleagues for the past week. They are human, they are family men,” he said, adding that they could not walk into a bakery with their uniform on without being stared at.

Main opposition Akel said it supported the protest, intensifying the public debate and widening the divisions among people.

While the majority of Cypriots agree there is deep corruption, a lot were critical of the protests, including the fact of strong presence of left-wing groups amongst the organisers.

“While I can understand certain positions, I cannot understand others expressed by a particular party,” the spokesman said, implying Akel.

He said events that created dangers for public health and potentially lead to injury and destruction of property should be approached with more maturity and realism.

Considering the positive epidemiological situation, events could have been postponed for later, he added.

“You cannot on one hand have political parties postpone gatherings and conferences and on the other have protests and gatherings, which unfortunately allow people who don’t have peaceful aims to exploit them and create trouble,” he said.

Koushos added that he expected mutual understanding between parties and the government to better manage the pandemic.

Of last week’s trouble, the spokesman said there should not be disproportionate treatment of violent incidents but the across-the-board “negative treatment of the police is not something that satisfies us.”

Koushos conceded that there have been “infinitesimal exceptions” of abuse of power and excessive or disproportionate treatment, “but let us not reach the point where good police officers would stop doing their duty fearing that in the end they will find themselves in the dock.”

The protest did not sit well with the chamber of commerce and industry whose members have suffered huge losses over the past year.

“It is not Keve’s intention nor desire to get involved in the matter,” it said in a written statement. “However, it cannot understand the logic by which businesses, hotels, and restaurants remain closed, people are asked to send a text to be able to move, even for health reasons, and at the same time hundreds of other people can gather in demonstrations where there is no way of observing health measures.”

Ombudswoman calls on police to explain their heavy-handedness at demo