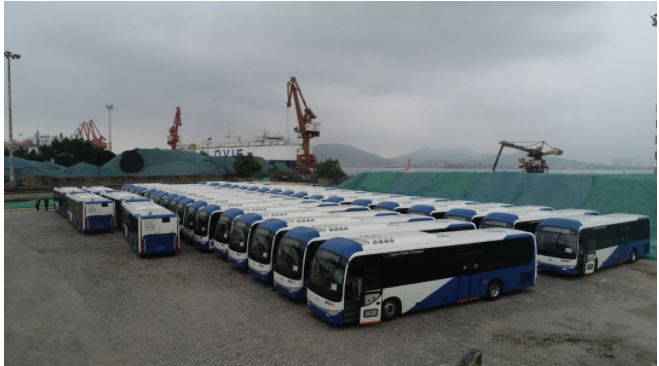 The 200 King Long high-end city buses that arrived in Cyprus from Xiamen on May 27, 2020 are both stylish and safe for use in the pandemic.

In what was the biggest export order for Chinese-made buses in the EU, two different models, the U12 and B12, have been imported to Cyprus. Both are stylish with a blue and white pattern design.

And the buses are equipped with the automatic spray system of the King Long Quan Health Bus, which can efficiently disinfect and sterilise the passenger’s easy-to-reach objects and the air in the car. This makes the buses ‘safer’ for passengers, in keeping with the needs of the times – prevention and control of Covid-19.

In addition, buses have been fully upgraded in terms of safety, comfort, energy saving, and user-friendly design to make public transport more appealing.

King Long buses have been on Cyprus’ roads since July of last year, even though tourist models had been used in Cyprus since 2008. In fact, in 2010, 70 buses were ordered for the tourism industry, indicating that Cyprus cooperation with Xiamen King Long United Automotive Industry goes back some years.

To mark the 50th anniversary of the establishment of diplomatic relations between China and Cyprus as well as the Chinese Lunar New Year of the Ox, Home in Cyprus and Cyprus Mail take a look at the Chinese bus that is now being used for public transport in the capital.

The delivery of the King Long bus was fraught with difficulties, the biggest being the coronavirus, which hit China and had a huge impact on procurement, logistics, production, shipping etc. making it very difficult to deliver overseas orders. By March, when the virus spread across Europe there were questions about whether the bus order for Cyprus could be fulfilled. 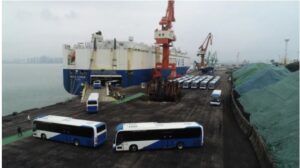 This batch of orders has high technical specifications and many process requirements, but the manufacturing period was very tight, creating higher greater demands for quality control.

Many of the parts were produced in Italy, the United Kingdom, and Germany. King Long had successfully purchased parts and components from European manufacturers in January. As a consequence of China’s epidemic, there were obstacles in business negotiations and procurement procedures. The spread of the epidemic in Europe in March also brought more challenges to the production and delivery of parts and components. Italy’s wheelchair lifting device, for example, was successfully delivered the night before Italy’s complete lockdown, under the condition of urgent production.

In the end, despite the many difficulties, King Long delivered orders on schedule. King Long received the praise of its bus partner Cyprus, who said that “despite the adverse effects of the epidemic, King Long still delivered on schedule and is our trusted partner! China’s bus manufacturing is amazing.”

Once the contract was honored, and the buses delivered, the issue of the after-sales service arose, because of the Cyprus government decree suspending the issuing of visas. After-sales staff of King Long were unable to come to Cyprus at the time agreed and could only provide their services remotely.

The process of applying for a special permit to come to Cyprus was difficult and had to seek the help of the Cyprus interior ministry and the Chinese Embassy, which helped them obtain visas. Three engineers finally arrived Cyprus in August and fourth in September.

The King Long buses started carrying passengers, in July 2020, with 155 put into operation in Cyprus. On July 8, Huang Xingyuan, Ambassador of the People’s Republic of China to the Republic of Cyprus, met with the president of the Cyprus Public Transport Company Filipe Cosmen and together travelled on the King Long bus together. The Economic and Commercial Counselor Li Yaohui was also with them.

Mr Filipe Cosmen said that King Long was top quality and boasted a high-efficiency performance, adding that the cooperation between the two parties was expected to be expanded.

In Cyprus, the bus company commissioned an internationally respected third-party vehicle inspection company to inspect its new buses. After a comprehensive and thorough inspection of each bus, that covered appearance, workmanship and performance, the inspection company, as well as the customers affirmed the excellent quality of the buses.

Since King Long resumed work on February 18, 2020, in addition to this export order to Cyprus has moved forward in the face of the unprecedented impact of the epidemic and the problematic international situation. A total of 8,555 buses have been delivered to 63 countries and regions including Saudi Arabia, Egypt, and Chile, and the export volume continues to rank first in the bus industry.

Coinciding with the 50th anniversary of the establishment of diplomatic relations between China and Cyprus, the Chinese bus order is considered an important milestone in the business cooperation and trade between China and Cyprus. During the Chinese Lunar New Year of the Ox, Gai Wenhui, Deputy Sales Director of King Long Europe, extended his best wishes to everyone: “Help each other and overcome the difficulties together.