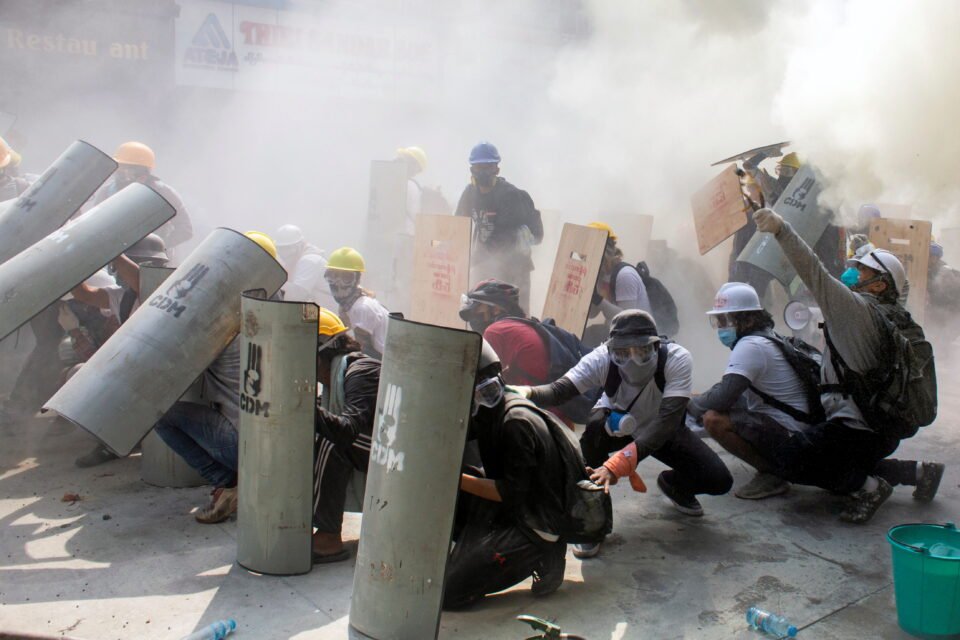 Protesters take cover as they clash with riot police officers

Myanmar police opened fired on Sunday on protests against military rule, killing at least two people and wounding several on the second day of a crackdown on demonstrations across the country, a doctor and a politician said.

Myanmar has been in chaos since the army seized power and detained elected government leader Aung San Suu Kyi and much of her party leadership on Feb. 1, alleging fraud in a November election her party won in a landslide.

The coup, which brought a halt to Myanmar’s tentative steps towards democracy after nearly 50 years of military rule, has drawn hundreds of thousands onto the streets and the condemnation of Western countries.

Police opened fire in different parts of the main city of Yangon after stun grenades and tear gas failed to disperse crowds.

One man was brought to a hospital with a bullet wound in the chest and died, said a doctor at the hospital who asked not to be identified.

Police also opened fire in the southern town of Dawei, killing one and wounding several, politician Kyaw Min Htike told Reuters from the town. The Dawei Watch media outlet reported that three people had been killed there.

Police and the spokesman for the ruling military council did not respond to phone calls seeking comment.

Police were also cracking down on a huge protest in the second city of Mandalay, the northeastern town of Lashio and the central town of Bago, residents and media reported.

Nevertheless, at least five protesters have died in the turmoil. The army said a policeman has been killed.

The crackdown would appear to show a determination by the military to impose its authority in the face of widespread defiance, not just on the streets but more broadly in areas such as the civil service, municipal administration, the judiciary, education and health sectors and media.

Police also threw stun grenades, used tear gas and fired into the air, witnesses said. Nevertheless, hundreds of protesters refused to back down by early afternoon.

Some marched, some gathered to chant and sing and others set up barricades.

“If they push us, we’ll rise. If they attack us, we’ll defend. We’ll never kneel down to the military boots,” said Nyan Win Shein from one Yangon protest.

Police were out in force early in the day and moved swiftly to break up crowds.

“Police got out of their cars and started throwing stun grenades without warning,” said Hayman May Hninsi, who was one of a group of teachers who fled to nearby buildings.

Saturday brought disturbances in towns and cities nationwide as police began their bid to crush the protests with tear gas, stun grenades and shooting into the air.

State-run MRTV television said more than 470 people had been arrested on Saturday. It said police had given warnings before using stun grenades to disperse people.

It was not clear how many were detained on Sunday.

Youth activist Esther Ze Naw said earlier that people were battling the fear they had lived with for so long under military rule.

“It’s obvious they’re trying to instil fear in us by making us run and hide,” she said. “We can’t accept that.”

The police action came after state television announced that Myanmar’s U.N. envoy had been fired for betraying the country after he urged the United Nations to use “any means necessary” to reverse the coup.

MRTV said he had been fired in accordance with civil service rules because he had “betrayed the country” and “abused the power and responsibilities of an ambassador”.

The ambassador, Kyaw Moe Tun, was defiant. “I decided to fight back as long as I can,” he told Reuters in New York.

While Western countries have condemned the coup and some have imposed limited sanctions, the generals have traditionally shrugged off diplomatic pressure. They have promised to hold a new election but not set a date.

Suu Kyi’s party and supporters said the result of the November vote must be respected.

The next hearing in her case is set for Monday.