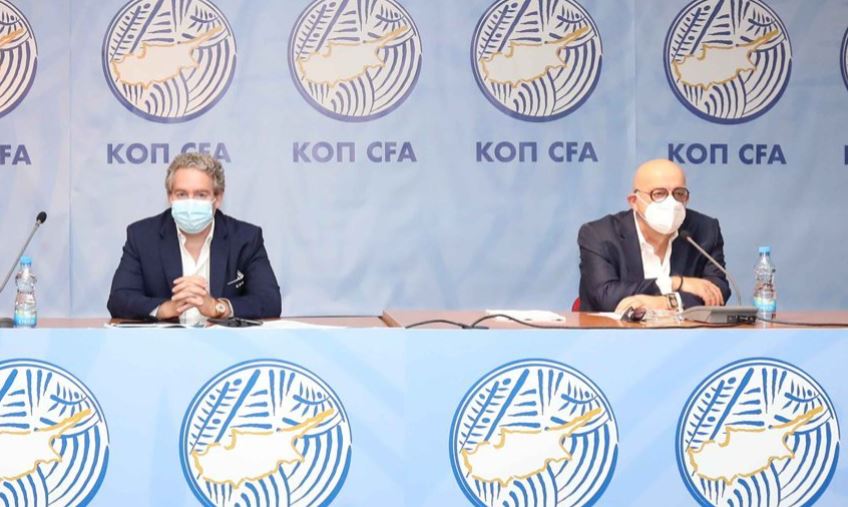 The CFA president Giorgos Koumas during a press confernece

The Cyprus Football Association conducted a meeting earlier today to discuss the level of refereeing in Cyprus in the aftermath of the game between Apollon and Anorthosis.

The game caused an intense war of words between the Limassol club and the Cyprus Football Association, with Apollon accusing the VAR official Giorgos Nikolaou of bias against the club and the general level of Cypriot referees of not being up to the desired standard.

Apollon also requested that the CFA reintroduces the hiring of foreign referees during the playoff round, explaining that the financial burden to the association can be resolved.

“If there is a will to do this we can all find the funds to make it happen,” Apollon president Nicos Kirzis explained.

Following today’s meeting, the CFA released a statement explaining the purpose and content of the meeting.

“There was a comprehensive discussion and exchange of opinions, all in the presence of the president of the refereeing committee Milorad Mazic, who presented in detail all of the information and facts currently applicable to refereeing in Cyprus and provided his view of the future,” the statement added.

“The Cyprus Football Association is closely monitoring the situation and is taking all necessary measures to ensure the smooth continuation and completion of all of its competitions,” the CFA statement concluded.

In terms of Apollon’s request to reintroduce foreign referees, there has not been anything from the CFA to suggest that this possibility is currently being considered.

It has been reported that the issue of the coronavirus pandemic is an additional obstacle to this happening during the current season.