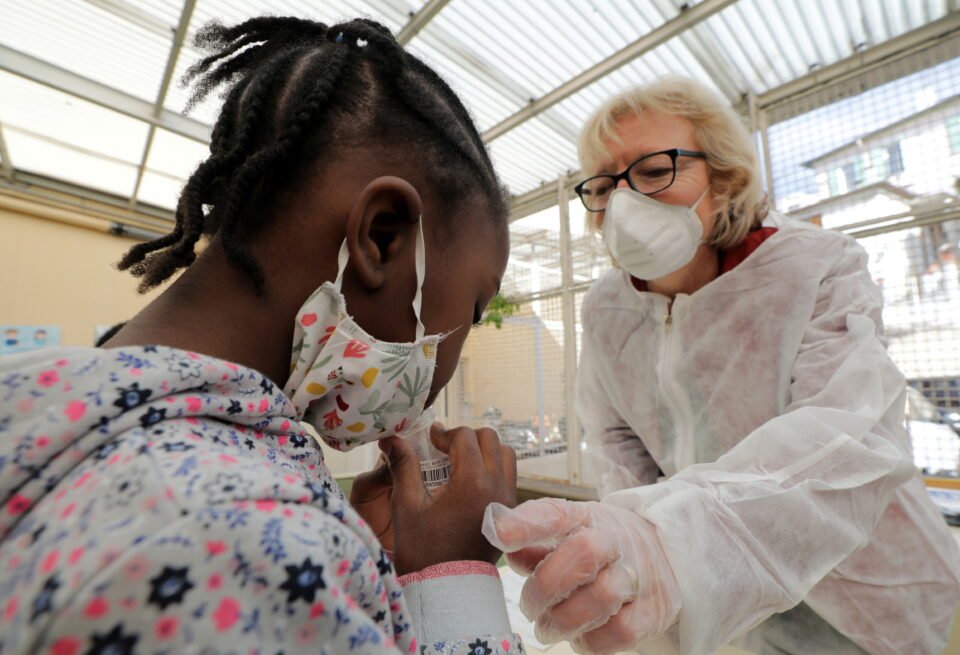 A medical worker performs a Covid-19 saliva test on a schoolgirl in a primary school in Nice, France

Rapid saliva tests for coronavirus, an alternative to nasal rapid and PCR tests, have been approved in the UK, France and Germany. In Cyprus, their role remains unclear, much to the chagrin of a growing number of parents.

Because they are less invasive and uncomfortable than the widespread nasal swab tests, rapid saliva tests are viewed as particularly useful in schools to save pupils from any discomfort, especially as all over 12-year-olds are now being tested regularly.

There is proof the health ministry sanctioned at least some of these tests, as they were put on a list of approved tests sent to pharmacists.

The owner of one of the bigger pharmacies in Nicosia, Angelos Miou from Flower Cross pharmacy in Strovolos, told the Cyprus Mail that pharmacies get a list of the government-approved tests every week and confirmed the list does include saliva tests.

Acting on this information, pharmacists placed orders, as they were asked by a number of customers to supply them.

Then something happened which confused all involved. The Pancyprian pharmaceutical association informed pharmacies in an informal email that the coronavirus scientific advisors will not accept the results of the rapid saliva tests being used officially.

“After contacting the Ministry of Health, we clarify that saliva tests are not accepted by the epidemiological team, so you cannot issue a certificate if you perform them because it will not be accepted by the authorities in charge at work or in schools,” the document, signed by the governing body of the association read.

“If someone wants the result of this test for personal use, you can do it without issuing a certificate.”

They are no longer recognised by the government, a spokesperson of the health ministry told the Cyprus Mail, as sensitivity is not guaranteed and the results do not prove conclusively if a person is not infected.

“They are not recommended by the ministry of health, though some pharmacies offer them,” said coronavirus advisory committee member Petros Karayiannis, University of Nicosia professor of microbiology and molecular virology. “Rapid tests are more sensitive.”

An exception is made for those with disabilities. A health ministry official, Carolina Stylianou, told a House education committee on Wednesday that pupils with disabilities may get tested in state hospitals by providing saliva which is then subjected to the PCR test.

The official clarified that in such cases the saliva collected is processed through the molecular method and not with rapid testing.

She said that saliva self-tests, already used in some countries, are not reliable and that some countries are now withdrawing them.

Lawyer and member of United Parents Facebook group, Alex Stylianou, is not convinced by the ministry’s stance.

“I spoke to the ministry today,” Stylianou posted on the group’s page on Thursday, “and was told that there is officially no announcement from the ministry that saliva tests are prohibited. But informally, they do not accept them and indeed there are instructions given to school principals to avoid saliva tests.”

Quoting the ministry’s announcement dated February 28, a rapid antigen is required. It does not specify that the test should be nasal, he said.

“So my opinion is that, based on their own announcement, they should accept saliva tests,” Stylianou said.

Karayiannis said that the government is at present debating approving some of them, and a relevant announcement may follow shortly.

The back and forth and lack of clarity has understandably annoyed parents who would prefer their children had the choice of tests.

“I called a private lab and they initially said these tests were accepted by the government but now this is being questioned,” Suzana Mavromatis, a concerned parent who says she would much rather take such a test.

“A relative of mine took a nasal test and the person who tested them was really rough, and struck a nerve, she was not able to sleep for three days and nights and had migraines, this is a person who has never been sick for years,” Mavromatis commented.

She is not alone in speculating the government may be hesitating to approve the saliva tests because of preferences for tests it has already ordered and from which special interest groups are making money.

One parent related his experience:

“When I explained to the principal of my daughter’s school that I don’t want my daughter to take a rapid test, I prefer the saliva test, she told me I cannot do that unless I get a doctor to certify she has a problem,” Marios Stavrou said.

“I said I don’t want to do that. I just don’t agree with the test and they replied I have to take it up with the health ministry.”

So he took his daughter to a pharmacy to take a saliva test anyway, and got a receipt from the pharmacy.

“The receipt doesn’t say what type of test she took so nobody at the school said anything.”

It makes sense to use a test which is less invasive, allows people to self-administer, meaning they are not in danger of having to wait in a line, and which has been approved by the EU, he reasoned.

There is no reason they should not be allowed, argues Savvas Krasias, operations manager at Pharmascope Ltd which imports saliva tests.

“There are three or four importers of saliva tests and all are baffled, the products are clearly on the approved lists, and what is the point of approving a product if you don’t approve the results?” he asked.

It has been proven the products have a 95 per cent sensitivity, he added, “actually 94.55 per cent, which surpasses by far the 91 or 92 per cent the ministry requires”.

The government has not only created huge problems for importers who, relying on the ministry’s lists, have ordered stock, but also for pharmacists who have made appointments and have stocked quantities accordingly, he added.

Meanwhile, the verdict is still out on the subject of the sensitivity, and not only in Cyprus.

“Saliva tests – also based on viral genetic detection – are emerging as another fast and convenient testing option, but the jury is still out on their real role,” the European parliament said in a briefing in December 2020.

“Some studies show that saliva is less sensitive than nasopharyngeal swabs, with the number of false negatives too high to make them really useful, while others suggest that saliva is better.”

Cyprus health authorities say they follow the guidelines of the European Centre for Disease Control, which clearly states; “In a situation where a nasopharyngeal or other upper respiratory tract specimen is not acceptable to the person being tested, saliva could be considered as an alternative specimen.”

Speedy hacks to whip up meals and treats at home