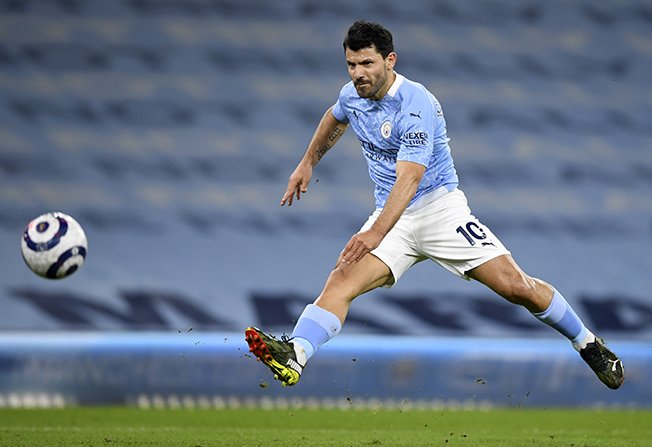 Sergio Aguero has scored 257 goals in 384 appearances for City, making him the highest-scoring overseas player in Premier League history

Manchester City’s record goalscorer Sergio Aguero insists he is ready to face a new challenge at the highest level after his departure at the end of this season was confirmed.

The Argentina international, who turns 33 in June, will leave the Premier League champions-elect when his contract expires in the summer.

Aguero has struggled with injuries since having knee surgery in the close season, with a hamstring problem complicating his comeback and then he had to sit out a month after a Covid-19 infection in January.

That will have played a part in the decision not to offer him a new contract but the player is adamant he is far from finished.

“When a cycle comes to an end, many sensations arise,” he wrote on Twitter.

“A huge sense of satisfaction and pride remains in me for having played with Manchester City for a whole 10 seasons – unusual for a professional player in this day and age.

“Ten seasons with major achievements, throughout which I was able to become the top historic goalscorer and forging an indestructible bond with all those who love this club – people who will always be in my heart.

“I was to join during the reconstruction era of 2011, and with the guidance of the owners and the contribution of many players, we earned a place among the greatest in the world.

“The task to maintain this well-deserved privileged position will remain on others.

“As for myself, I will continue to give it my utmost for the rest of the season to win more titles and bring more joy to the fans.

“Then, a new stage with new challenges will begin and I am fully ready to face them with the same passion and professionalism that I have always dedicated to continue competing at the highest level.”

In the decade since arriving from Atletico Madrid for a reported £38 million, Aguero has amassed 257 goals in 384 appearances, making him the highest-scoring overseas player in Premier League history.

His goal in the 4-2 Champions League win over Napoli in 2017 saw him overtake Eric Brook’s 78-year club record and a treble against Aston Villa in January last year took him past Alan Shearer for the most Premier League hat-tricks (12).

However, of all his goals the most famous is his added-time strike in the final league match of the 2011-12 season against QPR which secured the club’s first Premier League title.

Aguero has won four Premier League titles – with a fifth looking likely in his final season as City are 14 points clear with 10 matches to play.

He could also still add to his tally of one FA Cup and five League Cups before his departure.

“His legend will be indelibly etched into the memories of everyone who loves the club and maybe even in those who simply love football.

“This is not yet the moment for farewell words and speeches. There is still much to achieve in the remainder of the time we have with Sergio, and we look forward to his contributions to the challenges which lay ahead.

“In the meantime, it gives me great pleasure to announce that we will be commissioning an artist to create a statue of Sergio to live at the Etihad Stadium alongside the ones under construction for Vincent (Kompany) and David (Silva).

“And we look forward to the opportunity to bid Sergio a fitting farewell at the end of the season.”

City are working on plans to mark his departure at the final home game of the against Everton and they are hopeful thousands of supporters will be permitted to attend the Etihad Stadium when lockdown measures are eased further.

That would at least ensure Aguero, the last remaining player of the club’s first Premier League title-winning side from 2012, receives some sort of send-off.

Silva left after 10 years of service last summer with his final match played behind closed doors due to the coronavirus pandemic, and City are still hoping to organise a farewell match for the Spaniard.

Not much love for COVID-19 vaccine at Miami Open