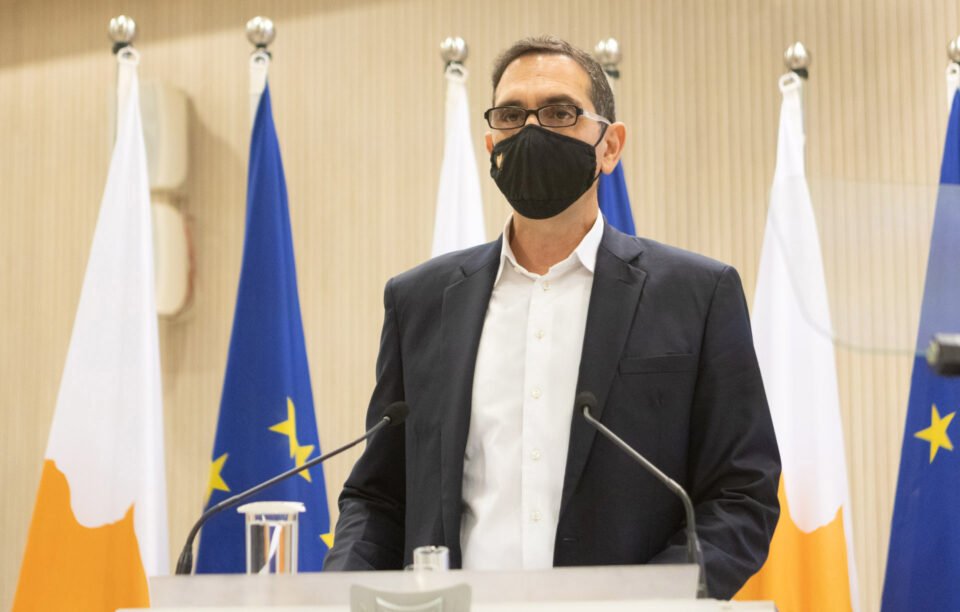 Health Minister Constantinos Ioannou during his news conference on Wednesday

In addition, the public will be allowed three SMS for permission to leave the house by exception over the weekends. The limit of two remains for other days, health minister Constantinos Ioannou told reporters.

Private tuition centres will be allowed seven people (including the teacher), while there will an increase in the number of people allowed in gyms and swimming pools.

The Council of Ministers on Wednesday also approved a supplementary budgetary bill of €250m of which €140m for the continuation of support schemes until the end of June, €60m for vaccinations, tests and medical supplies €50m for other expenses.

In statements after the cabinet meeting, Ioannou said the epidemiological situation was stabilising but still not safe. The situation in the hospitals was under control but ‘extremely difficult’ and reversible, he added.

Cabinet had therefore reaffirmed that steps to emerge from the lockdown must be slow and careful to prevent a backslide.

The measures will come into force on April 1 until April 30, the minister said.

Cabinet will meet before Holy Week to decide possible changes in view of Easter, he added.

The measures decided by cabinet are:

Targeted and more general population tests among workers, pupils and other groups allows authorities to have a real time view of the situation and to move quickly to prevent the spread of coronavirus, he added. Vaccinations were an additional weapon that will help protect the public and facilitate a return to normality.

The protection offered by vaccines is already visible, as the number of cases in care homes and among the old is down as is the number of hospital admissions of people aged over 70.  “In parallel we see a reduction in seriously ill as in most cases that show symptoms these are very mil,” the minister said as he urged the public to adhere to protocols.

Finance Minister Constantinos Petrides said that even though a €150m provision – equivalent to €1.2 per cent of GDP — had been included in the 2021 state budget for extraordinary expenses relating to the pandemic, cabinet had on Wednesday approved a supplementary budgetary bill of €250m to cover employees, business and unemployed participating in the labour ministry’s schemes (€140m), the purchase of vaccines rapid tests, consumables and pharmaceuticals (€60m) and other coronavirus-related expenses (€50m) expected this year.

Cabinet has also approved a bill on €1b in government guarantees for banks to provide loans to businesses and the self-employed affected by the pandemic. Petrides said that after consultations with parties, changes had been made to a previous bill, so that €300m will be for new loans for very small businesses and the self employed and €700m for new loans for small, medium sized and large companies.

Petrides said that government guarantees of €1b would mean additional liquidity for the economy of at least €1.43 billion.

Cabinet also approved an amendment to the subsidy scheme for the self-employed and small businesses no registered with VAT – that is those with an annual turnover under €15,600. He said that there are some 5,300 beneficiaries and the proposal is to raise the subsidy to €1,000 at a cost of €5.3m. The scheme will be run by the finance ministry.

For her part, Labour Minister Zeta Emilianidou said the employment support schemes will be extended to June. “It is important that the schemes will continue, employment will be supported with special emphasis on the hotel sector and businesses affected by tourism,” she said.

She also announced that the European Commission had approved additional financing of €125m for Cyprus’ schemes bringing the total to €604m.