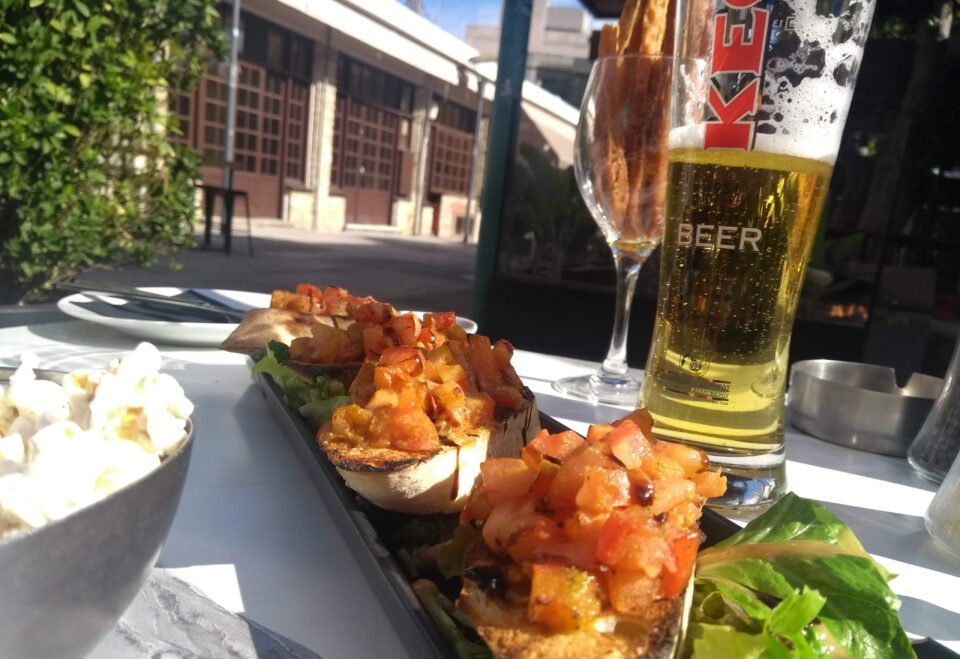 A walk through Limassol’s old town on Thursday revealed many an empty seat at the various establishments that chose to open that day, most of them in anticipation of the younger crowd that would fill the space deep into the afternoon and onwards. With the entire city being spooked into staying home by the potent gusts of wind sweeping everything in their path, an opportunity arose to visit a restaurant for the first time since the lockdown measures on the service industry began to be uplifted.

Blue Apple, found just outside the Agora marketplace on Saripolou street, has arguably the most optimised placement for social distancing and airflow at the moment. Its outside area, composed of both bar tables and smaller ones for parties of two or four at most, has space on either side and has the Saripolou square across from it, decreasing any feeling of being smothered by numerous patrons, at least before the area becomes entirely enveloped by people at night time.

The restaurant specialises in cocktails and non-alcoholic beverages, but also offers a targeted selection of food items and snacks, thus its self-anointed gastropub moniker. Upon being seated, we noticed that each table has a blanket on one of the chairs, to be used by those feeling the unexpected March chill that has hit the island in recent weeks. Vertical outdoor heaters are also dotted around the outdoor area.

We started with a light hors d’oeuvre, a tray of bruschetta, which Blue Apple was happy to customise for us so that they met the season fasting requirements, something which should also satisfy any vegan customers throughout the year. Out went the fresh mozzarella and pesto, leaving the crusty baguette slices, tomatoes, basil and olive oil. Simple, but very well done. Moreover, our drinks were accompanied by a bowl of popcorn and a Sauternes glass filled with crispy pitta sticks at no extra cost. Sweet and sour sauce is provided for dipping the pitta sticks in.

For main we ordered one pasta dish, the Napolitano Al Forno, which the restaurant was again kind enough to customise for us, removing all dairy from the proceedings. Again, a very simple dish, but the homemade tomato sauce came through very nicely, with a drizzle of balsamic on the periphery of the dish for decoration.

The other item did not meet any vegan requirements, seeing as it comes from the burger section of the menu. Though I’m particularly partial to good beef, I bypassed the beef burgers for their chicken burger. Served with freshly cut fried potatoes and coleslaw on the side, their chicken burger is breaded and fried, and served in a ciabatta-esque bun with lettuce and tomato slices on the bottom, melted cheddar on the top and tartar sauce spread under the top part of the bun.

It is probably the best breaded chicken burger I have had in Cyprus for a long time. The breading was perfectly crunchy and most probably included a mixture of flour and toast, and the combination of the pickles in the tartar sauce and the tomato and lettuce blended perfectly together. Again, a seemingly straightforward item but executed very well.

Overall, a very pleasant experience, particularly during the brightness of a midday meal. Would definitely visit again and I would find it hard to not opt for the chicken burger once more.

Secret ‘crypt within a crypt’ discovered under Pancyprian Gymnasium