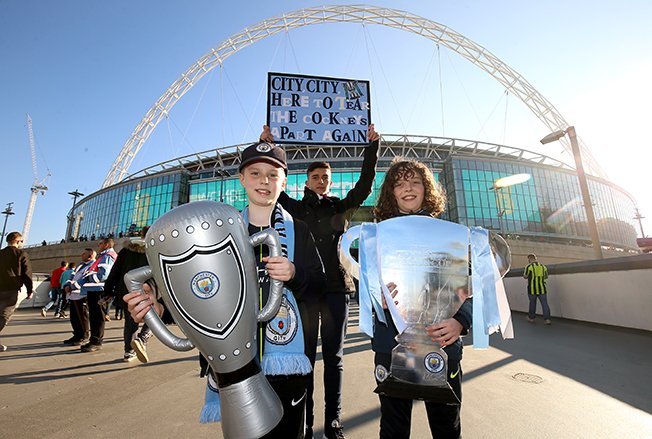 The clubs and the EFL published details of ticketing arrangements and Covid-19 protocols on Tuesday morning for the match on April 25, which will be the first outdoor pilot event to welcome in supporters of the teams involved.

Fans must order a PCR (polymerase chain reaction) test to take at home as close as possible to the match, and take a further PCR test five days afterwards.

They must also book a lateral flow test at a local site in order to have proof of a negative test within 24 hours of the match.

This proof – either on a text message or email – must be presented at Wembley to gain entry and City supporters must also show that proof if travelling down from Manchester on the specially-chartered trains and coaches.

Both clubs have been allocated 2,000 tickets, with 1,750 of City’s to be distributed to eligible supporters in and around Greater Manchester. For these supporters there will be 750 standard and first-class train tickets available, 750 coach spaces and 250 car parking spaces at Wembley.

The remaining 250 tickets will be distributed to qualifying City fans based in London or the Home Counties, the club said.

The FA Cup semi-final between Leicester and Southampton this Sunday will welcome in 4,000 spectators but these will be a mixture of local residents and NHS staff from the area around Wembley.

It is expected that a similar system of testing will be implemented for that match.

There will be 8,000 people permitted to attend the Carabao Cup final – the 4,000 club supporters plus a further 4,000 local residents and NHS staff.

The success of these pilot events – plus others including the World Snooker Championship, the FA Cup final and England’s group games at Euro 2020 – will be key steps along the road to allowing supporters back into venues in financially-viable numbers from June 21 onwards.

A group of 10 sports governing bodies last week gave their backing to the use of a Covid certification system as a means to removing social distancing restrictions at venues.

Such a system has been challenged by cross-party MPs as an infringement on an individual’s civil liberties.

“The alternative is social distancing, tiny crowds, major restrictions on people’s movement and ability to eat, drink, travel. Away fans banned for example.

“So to end those restrictions of freedom, we believe that something like this is an acceptable burden to give fans the freedom to attend.”

Why scalp health is the buzziest thing in beauty