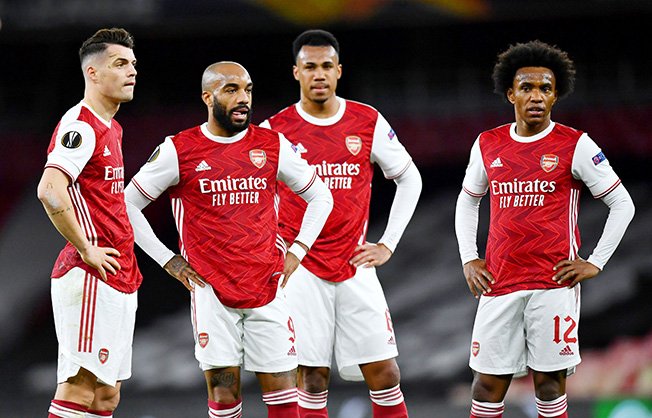 Mikel Arteta is well aware results are how he will be judged at Arsenal and called on the “big players” at the club to step up in Thursday’s Europa League quarter-final second leg at Slavia Prague.

Leicester and Rangers have already been knocked out of the competition by the Czech outfit this season and Tomas Holes’ stoppage-time equaliser at the Emirates last week has given them a crucial away goal in the tie.

With Arsenal a lowly ninth in the Premier League table, winning the Europa League is their best option to qualify for Europe next season and to give the Spaniard another achievement to point towards as progress after almost 18 months in the job.

He said: “Tangible is the right word and the only tangible thing is results. Whether you’re doing a good job or not, to judge it externally is only going to be judged with results.

“Internally, you know what you are doing and you can have many different ways of judging that but at the end of the day, externally results are the only important thing to give the perception that we are moving forward in the right direction.”

Defeat for Arsenal in Prague and an exit at the quarter-final stage would raise questions about the future of their manager.

But the 39-year-old insisted: “It’s very important for us and this is our club. There’s no individual interest, it’s all a collective interest that we want to do well in every competition.

“The game can put us in a position to go into the semi-final of a European competition. This is exactly where this club has to be and that’s why we have to do our best to earn that.”

Next season could be Arsenal’s first without European football since the 1995-96 campaign and yet Arteta revealed he has not thought about that scenario when putting plans in place for the upcoming term.

After qualifying for the Champions League for 19 years in a row under Arsene Wenger, the prospect of the Gunners being without a continental competition would not only be a big financial hit, but also a blow to their current manager.

Arteta has struggled to make an impact domestically aside from last season’s FA Cup win, with the Gunners well off the pace in the race for the top four.

On if he had drawn up a scenario for the summer if there is no European football, the ex-Manchester City assistant said: “No… because I don’t want to put it in my mind or transmit it to any of the players or anybody at the club.”

Captain Pierre-Emerick Aubameyang scored a double in both the FA Cup semi-final and final last season to lead the team to glory at Wembley.

He could be absent for the quarter-final second leg after he sat out Tuesday training having missed last weekend’s win at Sheffield United with illness.

Martin Odegaard (ankle) also needs to be assessed, but Bakayo Saka (thigh) and Emile Smith Rowe (ankle) are in contention for the clash in Prague.

“We’ve shown that in big games, big players have to step in and create the magic moments and you need that, so let’s hope that we can have them,” Arteta added.

“It doesn’t matter who it is but someone has to create when the team needs those moments.

One of Arsenal’s brightest prospects, Folarin Balogun, looks set to remain at the club with a new contract very close to being signed.

The 19-year-old, who scored his first senior goal in the Europa League earlier in the campaign, would have been out of contract this summer and had been expected to depart.

Plastic waste down, other waste up during pandemic