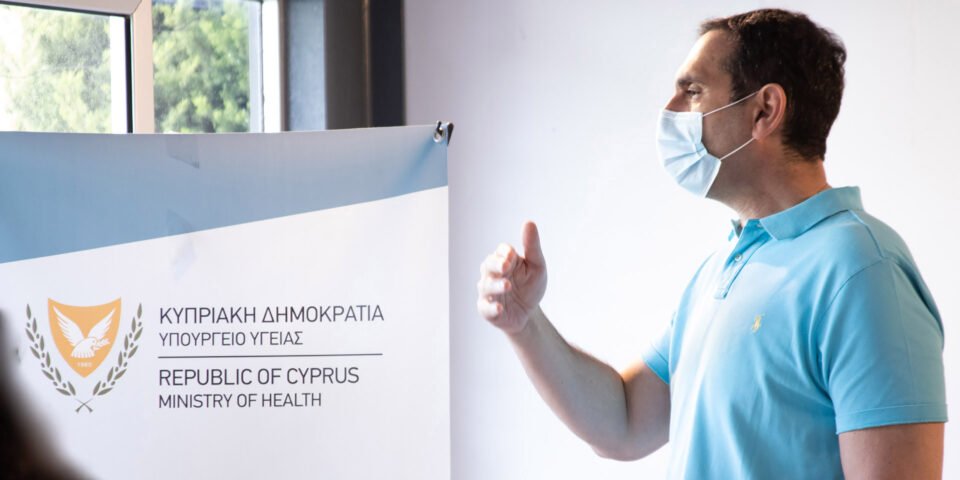 Saying Cyprus will reach herd immunity by late June based on current delivery schedules of vaccines, Health Minister Constantinos Ioannou on Thursday encouraged people to get vaccinated ‘regardless of the vaccine’, to speed up a return to normality.

Ioannou was speaking after he and other members of the cabinet were administered the AstraZeneca jab in order to boost confidence in the specific vaccine.

Authorities face an uphill to rebuild trust in AstraZeneca. Minutes earlier, the vaccination portal crashed for the second time in eight days minutes after it opened for people aged 61 to 63 amid a rush of applications for the Pfizer vaccine which were snapped up in a few minutes. The portal will open again in the afternoon.

Ioannou described the epidemiological situation as fragile and urged the public to abide by health protocols and personal hygiene measures, until herd immunity is reached.

“Vaccination saves lives, it is the vaccination which prevents and protects us from serious disease,” the minister said.

“Our goal is to reach the coveted vaccination coverage soon so that we can return to normality, in short to take lives back in our hands,” Ioannou said, while expressing concern over cases of people who test positive but fail to declare all their contacts, or those who came in contact with a positive case refuse to self-isolate.

Cyprus is expected to achieve the necessary immunity to Covid-19 by the end of June, Ioannou added, with 70 per cent of the population to have been vaccinated.

“Let us have confidence in the scientists of the European Medicines Agency and in the scientists of our country who guide our decisions. All licensed vaccines are safe,” reiterated the minister in response of the public’s hesitation to receive the Vaxzevria (formerly AstraZeneca) coronavirus vaccine.

Vaxzevria has been receiving bad press after the European Union’s drug watchdog said last week it had found a possible link between the vaccine and very rare blood clot cases, despite explaining that the benefits of the vaccine outnumber the rare side effects. On Wednesday, Denmark became the first EU member state to stop administering the specific vaccine.

Meanwhile people’s unwillingness to receive Vaxzevria has led to increased demand of the two other licensed vaccines administered with local personal doctors complaining over “intense pressure” from their patients to book them alternative vaccination appointments.

Their demands take up a lot of the doctors’ time, while it also creates delays in the country’s vaccination plan as the majority of Covid vaccines delivered on the island concern AstraZeneca. Pfizer and Moderna are also administered in Cyprus while 2,400 doses from Johnson & Johnson were shipped on Wednesday but the vaccine’s use has been postponed as EU and US experts investigate reports of six clotting incidents in the US.

“Because the quantities of other vaccines are still very small and of AstraZeneca much more, we cannot help people to get what they want,” the president of family doctors association,  Dr Andreas Polinikis said in a written statement.

Some patients even threaten to change their personal doctor to ensure a vaccination appointment with the jab of their choice, the doctor added.

Polinikis called on the health ministry to tell “the truth about the AstraZeneca vaccine”. Doctors will not accept the current situation, he added, and will proceed with dynamic legal measures by refusing to help their patients book a jab as this does not fall “within the scope of their professional duties and responsibilities.”

On Thursday, technical problems  again plagued the online vaccination portal, which falls under the responsibility of the Deputy Ministry of Research, Innovation and Digital Policy.

Deputy minister Kyriakos Kokkinos had said after the first time the portal crashed that it can be accessed by 30,000 to 35,000 people simultaneously. On Thursday, potential beneficiaries amounted to 26,000, but Kokkinos said “a larger number of connected users was recorded”. According to the deputy minister, multiple users attempted to book appointments for the same person and the portal was temporarily disabled due to an overload of the system. He said that when it opened, there were 120,000 people on the portal. The deputy ministry is looking to change the system to allow only one access per beneficiary, he added.

A retired IT professional Cyprus Mail reader referred to the people in charge of the portal as “stubborn and technically inept” after the portal crashed again only minutes after it opened, urging them all to “go home and save the taxpayers the wages they are being paid at least.”

Turkey says all issues with Greece to be discussed in meeting