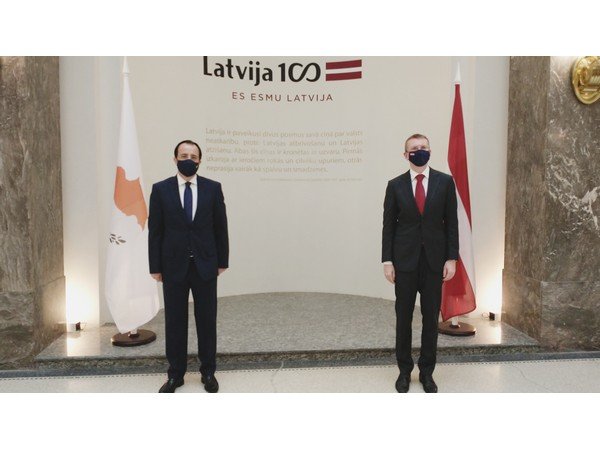 Nicosia relies on the international community and especially on its EU partners to make Ankara realise it needs to put the interests of all Cypriots above what it narrow-mindedly perceives as its own national interest, Foreign Minister Nikos Christodoulides said on Wednesday during an official visit to Riga.

This is the first working visit by a Cypriot foreign minister to Latvia since 1997 and only the second ever. Christodoulides’ visit also marks 30 years of diplomatic relations between the two countries.

After a meeting with his Latvian counterpart Edgars Rinkēvičs, Christodoulides said they reviewed the full spectrum of bilateral relations, discussed ways to further enhance them, identified synergies and planned on how to best utilise the momentum generated by this visit.

Christodoulides said they expressed their joint commitment to explore opportunities for cooperation in the field of research and innovation and agreed to further explore possibilities on economic relations through the active engagement of the two countries’ national Chambers of Commerce.

He added that he also briefed his Latvian counterpart about the Cypriot government’s decision to start welcoming back tourists as of May 10, “without restrictions, on the condition that they will have completed their vaccination programme.

“The fact that direct connectivity already exists between Latvia and Cyprus is very promising ― indeed I travelled here on a direct flight from Larnaca early this morning ― and we shall do our best to facilitate its further enhancement,” he added.

Christodoulides also said he briefed Rinkēvičs about the informal talks on the Cyprus problem held last week in Geneva as well as on the outcome “which was unfortunately not the desired one for us, for the EU, for the UN and for the international community as a whole.”

The positions put forward by the Turkish side, he said, run contrary to all relevant UN Security Council resolutions and to the common EU position, as they aim openly at partition and not reunification of the island.

“Towards this end, I explained to Edgars that we rely on the international community and especially on our EU partners, to impress upon Ankara the message that it needs to put the interests of all Cypriots above what it narrow-mindedly perceives as its own national interest,” Christodoulides said.

He added that Nicosia expected from its EU partners such as Latvia, that this message will be delivered to Turkey in a clear and unambiguous manner on every occasion, including at the upcoming European Council in June, during which the prospect of a positive agenda in the EUʼs relations with Turkey will be discussed.

Rinkēvičs said Latvia has always supported the settlement of the Cyprus issue within the framework of the parameters agreed in the UN process.

“It has never been a two-state issue for Cyprus,” he said, adding that the EU’s long-standing position was that only those candidate countries could become EU members that have resolved issues with their neighbours, especially those related to territorial integrity.

“What we are most interested in,” he added, is how to make the EU’s role more effective, more united when it comes to tackling this issue, how to strengthen the UN process and strengthen the talks.

Christodoulides was to also meet with Latvian President Egils Levits and Speaker of the Parliament, Ināra Mūrniece.

On Thursday, Christodoulides will travel to Vilnius, for a meeting with his Lithuanian counterpart Gabrielius Landsbergis.