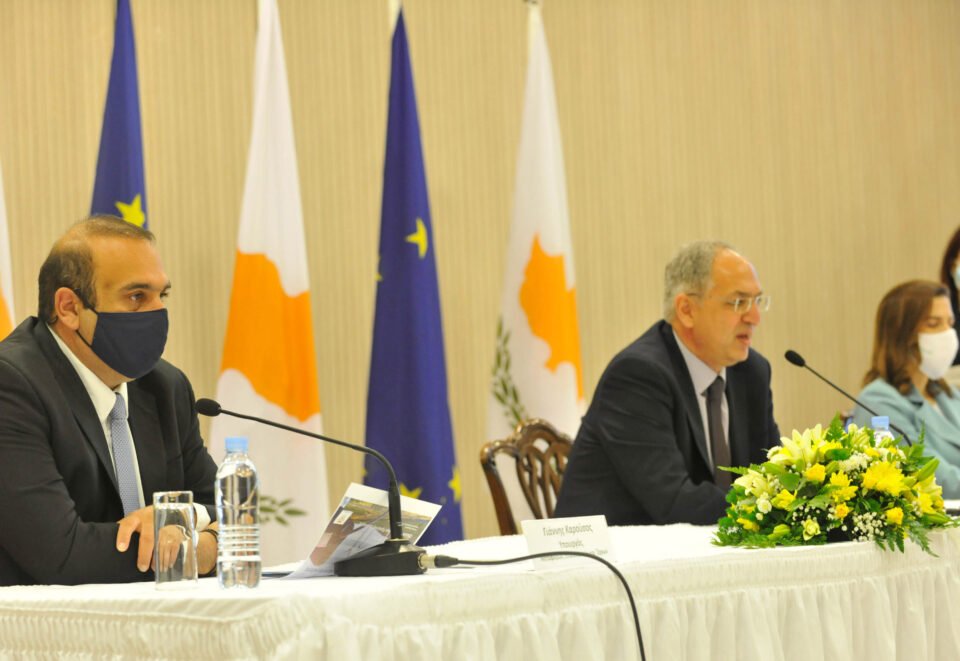 From left: Yiannis Karousis, Costas Kadis and Natasa Pilides at the press conference on Monday

More than €1 billion will be allocated in Cyprus over the next five years for a speedy transition to a ‘green economy’, three government ministers said on Monday.

In opening remarks during a joint news conference, Agriculture Minister Costas Kadis stressed that from the first months after the coronavirus pandemic broke out, the government had set the goal of turning the crisis into an opportunity, implementing reforms and projects ensuring a “more sustainable” growth model.

The measures in the pipeline, he added, will allow the island to raise its game in a number of areas where so far it has been underperforming.

Some of these areas include the rational management of water resources, management of solid and animal waste, forest fire protection, protection of the marine ecosystem, sustainable growth through aquaculture, and the need to cut back on carbon dioxide emissions in industry, businesses and organisations, and farming.

The total budget to be allocated to the agriculture ministry through the national plan comes to €200 million, providing for the rollout of 19 measures – of which 14 concern investment projects and five relate to reforms.

Some 40 new temporary jobs would be created within the various departments of the ministry implementing these measures.

Regarding investment in ‘climate neutrality’, energy efficiency and the penetration of renewable sources of energy, Kadis put the cost at €45 million.

Calling urban waste one of the most important challenges facing the country, the minister went on to say that investments relating to the cyclical economy would come to €50 million – this will include expanding the national network of Green Points, creating refuse collection and recycling points, establishing a composting network, as well as creating ‘Green Kiosks’.

Also on the cards is an integrated infrastructure project in Orounda – budgeted at €26 million – to manage animal waste and by-products with the production of biogas.

For her part, Energy and Commerce Minister Natasa Pilides spoke of plans to reduce pollutants, better air quality, the creation of ‘green jobs’, and the development of competition driving electricity prices down.

During the 2021 to 2027 period, the energy ministry will manage co-financed funds to the tune of €547 million, of which €337 million will come from the Recovery and Resilience Facility, and €209 million from EU structural and cohesion funds. About 61 per cent of these funds concern the ‘green economy’.

Pilides said these funds will be given in the form of incentives, attracting investments with the aim of making Cyprus more sustainable and competitive.

She highlighted projects geared at energy-saving and generating power from renewable sources, as well as an energy storage scheme, to be financed through the EU’s Just Transition Fund.

Lastly, Transport Minister Yiannis Karousos said his ministry would promote projects of a total value of €89.3 million relating to electric cars, the scrapping of polluting vehicles, and infrastructure development.

According to Karousos, overall his ministry is eligible for €237.7 million from the Recovery and Resilience Facility.