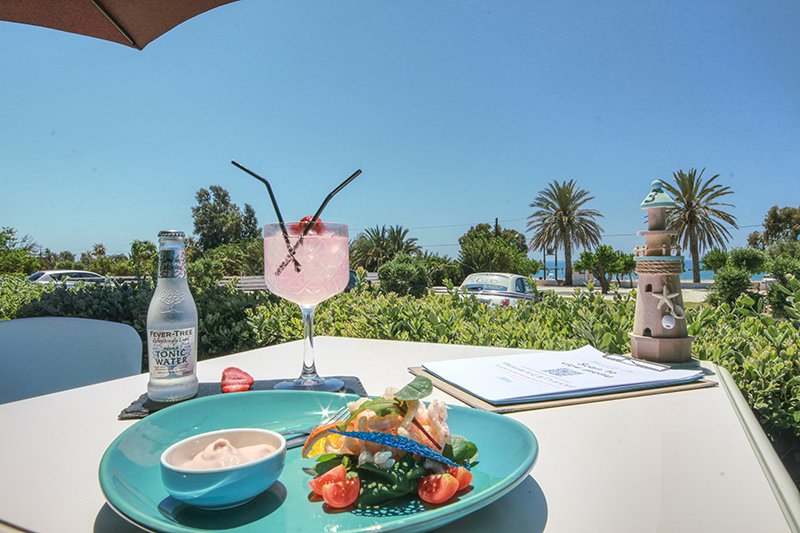 The name G&T’s at Cielo Restaurant reflects the initials of the owners Gary and Tracy Larman and has actually been the name of three restaurants in Paphos over the years. G&T’s first opened in Kallepia, then moved to St Georges and in July last year moved to its current fabulous location set back from Geroskipou beach. The restaurant, formerly called Cielo, has been rebranded as G&T’s at Cielo. At all venues, Gary and Tracy have built up a very loyal band of customers, who have followed them from one restaurant to the next. The new location was certainly worth the disruption of the move to the owners, even in the middle of a lockdown. Set back from the beachfront road, the sea views from the beautifully designed interior and spacious outdoor terraces, are exceptional. On a hot day, the breeze coming in from the sea makes it the perfect location to enjoy lunch. An absolute gem of a setting!

On arrival at the restaurant, both of the friendly owners were working front of house. The first thing that struck us was that every guest had been there before and were very well known to the owners. Always a good sign! 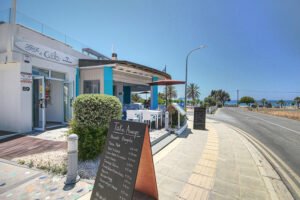 The menu is extensive, and you would be hard-pressed not to find something that takes your fancy! There is a choice of 15 dishes for first course, reflecting an international menu with a Mediterranean influence. One of the options also reflects the Scottish heritage of the chef – Haggis, Neeps and Tatties, served with a Whisky sauce. Other tempting starters include Goat’s Cheese Parcels and Prawn Saganaki.

Friends had warned us that the main courses were large, so we elected to share just one starter: Chicken Liver Pâté served with toast and an onion compote. The pâté was smooth and rich in flavour, with the onion compote being the perfect accompaniment.

This is an all-day dining venue, which starts with a very reasonably priced breakfast menu, running through to snacks and fine dining. Most of the main course options were priced from €14 to €16 up to €30 for a Fillet Rob Roy, served with a whisky sauce, black pudding and haggis. Next month, Scottish Blue Lobsters will be introduced to the menu.

We chose two dishes – the G&T Burger and Fritto Misto. No explanation needed for the burger, other than this house-speciality was topped with all the usual goodies, including cheese, mushrooms, onions and bacon. The burgers here are 100% quality beef. It was served in a fresh bun and declared to be superb. The Fritto Miso is traditionally a selection of deep-fried fish, and this one included calamari, cod, salmon and prawns. They were not greasy and cooked to perfection. Calamari would generally give the game away, as to the delicacy of its cooking. Both dishes came with what can only be described as the most enormous and delicious chips we have ever experienced. They are twice cooked and made strictly from potatoes, which are grown in red soil. A very fresh salad bowl with both main courses completed the dish.

For dessert options, think of traditional British homemade puddings, such as Treacle or Jam Sponge, served with fresh custard. We were defeated at this point and could not entertain the idea of a sponge, lava cake, or cheesecake, but I would have no doubt that they would be outstanding, based on the quality of the food we enjoyed.

Every Sunday, they also offer a traditional roast lunch, with a variety of meat and fish options. Booking is highly advisable. If in-house dining is not for you during these times, another option would be to choose from the takeaway menu, and enjoy eating on the beach.

The effort of moving premises, and the upheaval to the business, must have been hard for the owners, combined with the stops and starts of lockdown, but when you look around from this wonderful, new location, you can’t help but think that G&T’s has hit the jackpot, and has now found its forever home!

HOW MUCH Main courses from €10