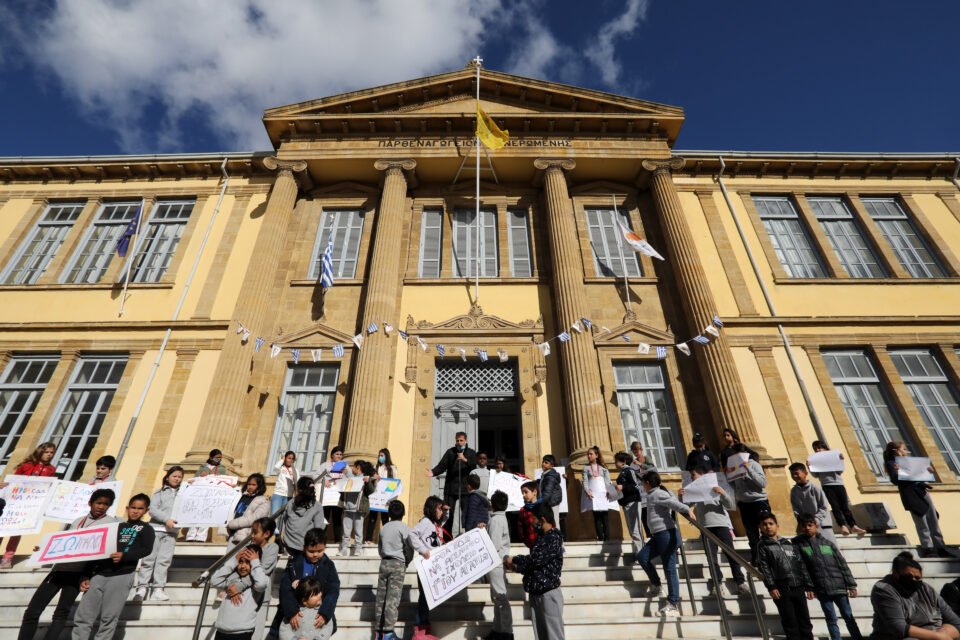 Phaneromeni pupils protest over plans to close their school

While acknowledging the education ministry’s efforts to make alternative arrangements, Child Commissioner Despo Michaelidou Livaniou on Monday expressed concern that the planned closure of the Phaneromeni primary and lower secondary schools in Nicosia had failed to take into consideration the interests of the affected children.

The commissioner said that although the 19th century building belongs to the church and not the state, the ministry should have initiated the necessary consultations to ensure that any decision put the interests of the children first.

She looked into the issue after reports in the media and social media about the agreement earlier this year between the archbishopric, the University of Cyprus, the finance ministry and Nicosia Municipality under which the historic building will be restored to house the university’s school of architecture.

While the agreement was welcomed by the Nicosia Chamber of Commerce and the Nicosia tourism board as a promising step towards the revival of the old town, it prompted protests from parents and children at the school who complained they had not even been consulted.

They found support in the Proodeftiki teachers’ movement, which voiced its opposition to the move. The teachers argued the schools cover the vital needs of many vulnerable children in the area and their families and their closure would lead to their marginalisation.

The ministry countered that there were other schools in the area for the 120 children affected and added that every effort was being made to facilitate them.

In her statement on Monday, the commissioner said she had become concerned over the large number of children involved and the objections voiced by those affected and asked to be officially briefed by the ministry.

Based on this and saying she would comment only on the impact on pupils at the two schools, she noted that there was no reference of a dialogue with children and their parents, even though article 12 of the convention of the rights of children give children the right to express their views.

In addition, the decision did not take into consideration any aggravating factors that would advocate against relocating the children to other schools, therefore the proposed solution does not serve the rights of children to education. Thirdly it does not appear that the other bodies or Nicosia Municipality had studied the town planning and environmental conditions in the area and what impact a new use would have, nor the absence of a primary school there would have in the future.

“The decision appears to have been based on anything but human centric and child centric criteria,” she said.

The commissioner said she did not want to negate the efforts by the education ministry to register children in schools in the wider area and for arrangements made to provide bus transportation but added the ministry had failed to study the psychological and social repercussions resulting from the change, particularly the ties developed among children at the school.

“Just adding this and only this factor, it is clear that the decision taken to close the schools of Phaneromeni at this specific juncture did not primarily take into consideration the interests of the affected children,” she said.

Setbacks and mindset roadblocks of a sustainable lifestyle