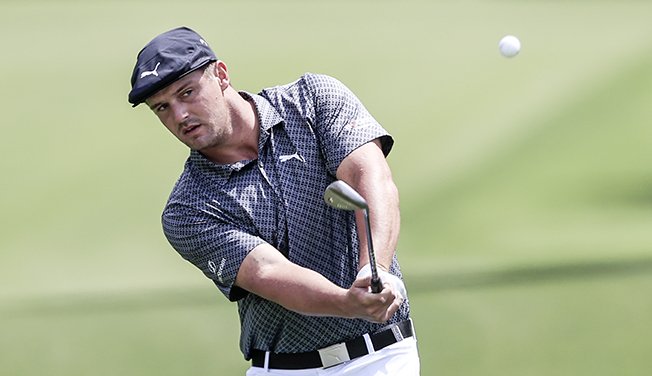 Bryson DeChambeau has dismantled courses with his prodigious length off the tee and on Wednesday said to expect more of the same from him this week at Torrey Pines, where he will try to successfully defend his U.S. Open title.

U.S. Open venues are typically played under very difficult scoring conditions, where accuracy off the tee is crucial given narrow fairways that are guarded by thick rough, but DeChambeau likes to march to the beat of his own drum.

At a relentless Winged Foot last year, DeChambeau seemed unbothered when his massive drives missed the fairway as he simply muscled the ball out of the rough and onto the greens en route to a commanding six-shot victory.

DeChambeau, who has transformed his body and is the longest hitter on the PGA Tour, sees no reason to do away with that aggressive strategy at Torrey Pines.

“It’s a little bit similar to Winged Foot, albeit the grass and the rough is a little thicker. It’s a different type of grass, so you can’t get through it as easily,” said DeChambeau.

“For the most part, I’m going to be trying to bomb it as much as possible and try to gouge it out when I don’t hit it in the fairway.”

In DeChambeau’s only two appearances at the regular PGA Tour event held at Torrey Pines, he missed the cut in both 2017 and 2018, which both came before his body transformation.

While DeChambeau knows a severe test awaits this week, he said his gameplan allows him to simplify his course preparation even though he knows Torrey Pines will present new challenges.

“I’d say the rough is a little different, so it’s not going to be as easy to get through, I think, with the wedge out here at Torrey Pines compared to Winged Foot,” said DeChambeau.

“But having said that, I think it’s going to be the same sort of strategy. If I can keep hitting it to the front of the greens, two-putting when I get into trouble, I’m going to give myself a great chance this week.”

See you in Polis Chrysochous this summer!

Russia back on track after 1-0 win over Finland