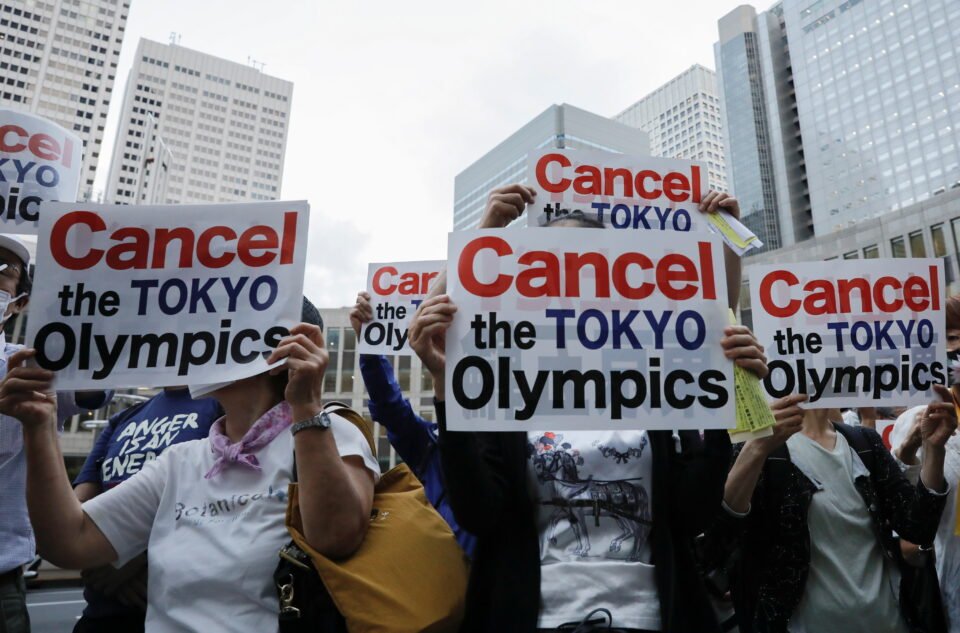 Alcohol, high-fives and talking loudly will be banned for the reduced numbers of Olympic ticket holders allowed into venues as organisers conceded a “sense of celebration” would be limited at a Games already postponed by a year due the coronavirus.

Organisers have pushed ahead with preparations for the Olympics, still called Tokyo 2020, despite strong concerns among the Japanese public that hosting athletes from around the world could result in further COVID-19 outbreaks.

Media reports that organisers were considering allowing alcohol consumption in Olympics venues provoked an outcry this week, with the hashtag “cancel the Olympic Games” garnering tens of thousands of tweets.

“As the Organising Committee wants to hold the Games in a safe and secure manner, it’s our responsibility to make it happen,” Tokyo Olympics President Seiko Hashimoto told reporters on Wednesday, a month before the opening ceremony on July 23.

“So if our citizens have concerns (over serving alcohol at the Olympics), I think we have to give up on that. That’s why we have decided to ban the sale of alcohol.”

Alcohol sales have been restricted in and around Tokyo after health officials warned drinking would encourage close contact and mingling in bars that could help spread the virus.

Ticket holders, to be selected in a new lottery after domestic spectators were capped at up to 10,000 at each venue, will also be asked to refrain from talking en route, to go straight to venues and then straight home, and cannot ask athletes for autographs.

Japanese medical experts have said banning spectators was the least risky option but also included recommendations on how best to host the Games if spectators were admitted. Spectators from overseas have already been banned.

Hashimoto has defended the decision to allow spectators.

“I understand that holding the event without spectators would lower the risk, but there is evidence that there have been no clusters at other events and tournaments,” Hashimoto reporters on Tuesday.

Limited numbers of fans have been present at stadiums across Europe for matches in the Euro 2020 soccer tournament and thousands of spectators have attended baseball games in Japan.

Organisers said on Wednesday they would decide on whether to allow spectators at night sessions, taking infections into account, by July 12 when virus curbs are due to be lifted in Tokyo and some other areas.

Prime Minister Yoshihide Suga has still not ruled out holding the Games without spectators if Tokyo is put back under a state of emergency, from which it only emerged on June 21.

Many Japanese remain sceptical about the possibility of holding even a scaled-down Games safely during a pandemic, with 619 infections reported for Wednesday in Tokyo, up 118 cases versus a week ago.

“I believe that it will not be possible to prevent contagion within the Athletes’ Village,” Masahiro Kami, the head of think-tank Medical Governance Research Institute, told reporters.

“Because of the delay in the vaccination rollout in Japan, it means that those people going in and out of the Athletes’ Village … will not be vaccinated in time.”

In another blow to organisers’ pledge that the Games will be safe, a second member of Uganda’s Olympic delegation, an athlete, has tested positive for COVID-19 in Japan, an official from the team’s host city of Izumisano said on Wednesday.

The arduous preparations for the Olympics also appeared to have taken its toll on organisers.

Tokyo governor Yuriko Koike was hospitalised on Tuesday after the metropolitan government said she would take the rest of the week off due to fatigue.