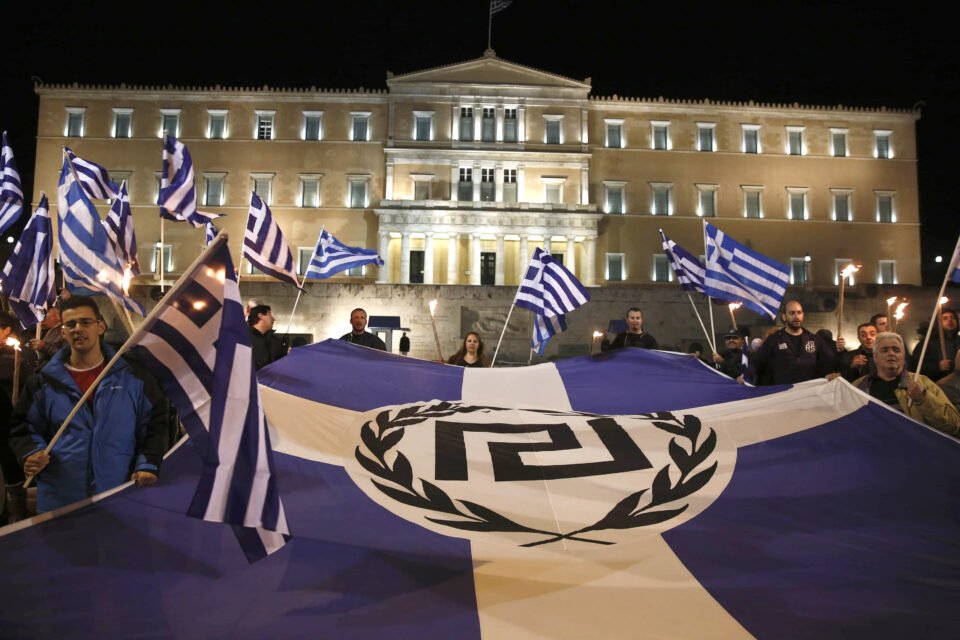 A Golden Dawn rally in Syntagma square in Athens, 30 November 2013

Whilst other parties saw drops in support, Elam was the only party to double its parliamentary representation within 5 years, going from two seats in 2016 to four seats in 2021.

In a concerning turn and following a proposal from Diko, Elam will be presiding over an ad hoc parliamentary committee on the ‘demographic problem’ of Cyprus.

Problematic manifestations of the right have been on the rise in recent years, as can be seen in examples ranging from the victories of France’s National Rally (23.34 per cent) and Italy’s Lega (34.36 per cent) in the latest European elections, to the upheaval brought about by ruling parties in Poland and Hungary. Factors such as economic crises, the handling of the Covid-19 pandemic, corruption and general disenchantment of voters with mainstream parties have been exploited by parties on the fringes around Europe.

Cyprus is no exception to that. However, an alarming element of Cyprus’ experience is that Elam was born out of the most extreme of the far-right groups in Europe, namely Greece’s Golden Dawn.

Coming back to Elam, the party started as a movement in 2008, established by Christos Christou (leader and MP) who was a member of Golden Dawn during his studies in Greece. Despite Christou’s denial of this, there are claims that he had worked in the personal guard of Michaloliakos. Attempts were made for the movement to be recognised as  ‘Golden Dawn – Cyprus Branch’ but this failed. It then registered as a political party in 2011 with its new name.  Elam has been described by the Council of Europe’s Commission against Racism and Intolerance as a “far-right military style political movement.”

Over the years, Christou has made statements such as “We are the Golden Dawn of Cyprus” and Michaloliakos is “the most honest and patriotic politician I know.” However, over time and with the experience from the rise and fall of Golden Dawn, Elam has been strategic in creating a cleaner image, with its leader attempting to sever ties to Golden Dawn. By September 2020, Christou said that the ties to Golden Dawn had been cut but “history cannot be erased.”  Whether the attempts to sever links to Golden Dawn were successful (hence the doubling of its parliamentary seats from one electoral period to another) or whether its electorate simply did not care about any such links cannot be answered with certainty.

The normalisation and mainstreaming of hate

Elam’s links with Golden Dawn cannot be doubted, despite Christou’s attempts to do so. Although it does try to maintain a clean(er) image, its positions are concerning. They include, for example, “motives for new families” which refers to, amongst others, the prohibition of marriages between homosexual persons. In relation to what it defines as “illegal migration,” it proposes the establishment of closed reception centres to ensure full control of asylum seekers.  When it comes to civil society, it recommends the creation of a strict framework to evaluate NGOs and states that those “serving the rights of foreigners to the detriment of the Republic of Cyprus to be banned.” Elam rejects the objective of reunifying Cyprus in the form of a bi-zonal, bi-communal federation. In fact, Christou has claimed that “Cyprus is Greece”, disregarding of course the fact that Cyprus is home to Turkish Cypriots.

Right-wing parties which had been concerned about losing votes to Elam stepped up their racist and xenophobic rhetoric.  For example, a video released during Disy’s 2021 election campaign depicted a Greek Cypriot woman saying that “it is important to feel safety in my country. Migration is a problem that concerns me a lot.”

Post elections, the first ever female president of the parliament was elected, with Elam voting  in her favour. This constitutes a dangerous normalisation of a party which does not embrace the principles necessary for the functioning of a human rights culture. Disy (nor its candidate for the parliamentary presidency) did not seem to bat an eyelid when receiving its votes.

The Cypriot branches of governance, civil society and the electorate must be aware and wary of the link between Elam and Golden Dawn. The foundational elements, the history and the current positions of Elam speak for themselves. So the question is? Is Elam really wearing new clothes? Given its sister organisation, I highly doubt it. So, it is necessary for the mainstream parties to recognise what we are dealing with and stop utilising Elam’s rhetoric for purposes of keeping or gaining votes. This is nothing but a short-sighted and destructive vision which can only damage an already damaged society. Instead, the state should make concerted efforts to start working towards creating socio-economic conditions and constructing a culture where groups like Elam are not sought out by the electorate. In perfect honesty, I am deeply concerned about the state of Cypriot democracy if Elam continues to rise electorally and if the normalisation of its narrative continues.