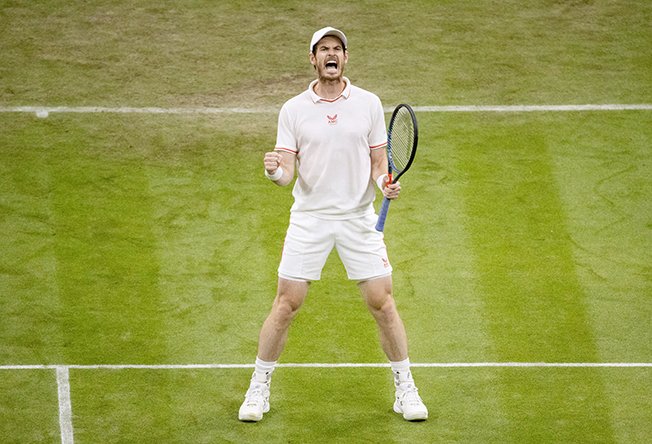 Andy Murray wrote another chapter in his lengthy book of dramatic Centre Court nights by coming from two sets to one down to defeat Oscar Otte and reach the third round of a grand slam for the first time in four years.

Not since the 34-year-old limped through to the quarter-finals here in 2017, before his two hip operations and what he thought would be the end of his career, had Murray won two matches at a slam.

And it did not look likely to happen here either when, labouring and frustrated, he saw a lead erased and then reversed by German qualifier Otte, making his Wimbledon debut.

But Murray has come back from graver situations on the lawns of SW19 and, after a break for the roof to be closed, he found some of the old magic to win 6-3 4-6 4-6 6-4 6-2 and set up a third-round clash with 10th seed Denis Shapovalov.

Highlights of day three of the Wimbledon tennis championships on Wednesday (all times GMT):

1920 VENUS KNOCKED OUT BY JABEUR

After Serena Williams retired injured on Tuesday, sister Venus Williams lost 7-5 6-0 to Ons Jabeur in the second round, marking the first time neither player advanced to the third round at Wimbledon when both played in the tournament.

1830 ERROR-PRONE KENIN KNOCKED OUT IN 45 MINUTES

Fourth seed Sofia Kenin was knocked out in the second round by compatriot Madison Brengle, who won 6-2 6-4 in just 45 minutes. Kenin fired 20 winners to Brengle’s six but that was offset by 41 unforced errors.

1735 EVANS TOO GOOD FOR LAJOVIC

Briton Dan Evans, seeded 22nd, needed less than two hours to dismantle the challenge of Dusan Lajovic, beating the 42nd-ranked Serbian 6-3 6-3 6-4 to reach the third round.

Second seed Aryna Sabalenka dropped the opening set in her second-round match before powering to a 4-6 6-3 6-3 victory over Briton Katie Boulter, who is ranked 219th in the world and was spurred on by the home crowd on Centre Court.

In the men’s draw, Canada’s 16th seed Felix Auger-Aliassime moved into the second round with a 6-3 6-3 6-3 victory over Brazilian Thiago Monteiro without conceding a single break point opportunity.

Nick Kyrgios’s problems with the Wimbledon grass continued on Wednesday but the Australian overcame a nasty fall on Court One in his opener against 21st seed Ugo Humbert before sealing a 6-4 4-6 3-6 6-1 9-7 victory.

Kyrgios was unable to hide his frustration at the grass he believed was playing too slowly before the match was postponed on Tuesday due to Wimbledon’s 11pm curfew.

Defending champion Novak Djokovic produced a flawless performance to beat Kevin Anderson 6-3 6-3 6-3 in a rematch of their 2018 Wimbledon final.

The world number one continued his perfect record against South African Anderson, with four wins in as many meetings at the All England club.

Third seed Elina Svitolina was pushed the distance by Alison Van Uytvanck before the Ukrainian advanced to the second round with a 6-3 2-6 6-3 victory on Court One.

Queen’s runner-up Cameron Norrie dropped the opening set against Lucas Pouille but the Briton bounced back to win 6-7(6) 7-5 6-2 7-5.

1330 ISNER ELIMINATED IN FIVE-SETTER BY NISHIOKA

Playing on Court 18, where he beat Nicolas Mahut in 2010 in the longest match in history, Isner fired 87 winners and 36 aces and won four more points than his opponent but made 70 unforced errors to give Nishioka victory.

Italian seventh seed Matteo Berrettini, who won the Queen’s Club Championships on his tournament debut this month, dropped a set against Argentine Guido Pella but won his first-round match 6-4 3-6 6-4 6-0.

Our View: Three Lions roar but must not get cocky